AOC U2879VF Review – With launch prices of several thousand pounds, 4K displays have earned a reputation for being hideously expensive, and you didn’t even get a 60Hz refresh rate on some early 4K models. As the technology has become more mainstream, and production lines have matured, though, you can amazingly now pick up a 4K screen. 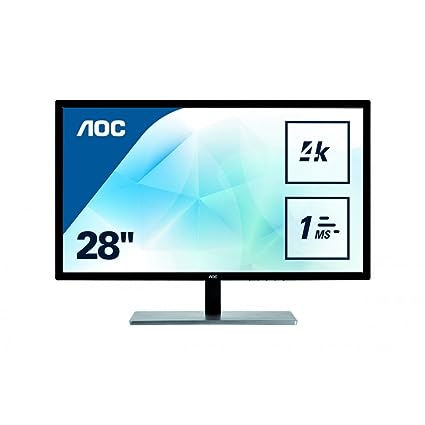 That’s exactly what AOC has managed to achieve with the U2879F. It’s the most affordable 4K display we’ve ever seen, and the cheapest on test, behind both Iiyama’s GB2888UHSU and BenQ’s BL2420Z.

Amazingly, the AOC U2879F is also a 28in display, with a 10-bit panel. It uses TN technology, though, which has the benefit of quick response times, but has worse viewing angles than IPS screens. Like Iiyama’s GB2888UHSU, it also offers support for AMD’s FreeSync technology at up to 60Hz at 4K, and it’s great to see this feature in a low cost display, especially when the equivalent G-Sync displays for Nvidia users cost so much more money. There’s a snag, though, which is that FreeSync only works between 40Hz and 60Hz, so you’ll lose the benefits if your frame rate drops below 40fps, which is sadly very likely given the tough hardware requirements of 4K gaming.

Unfortunately, AOC has also cut a lot of corners to achieve the low price. First off, the glossy plastic materials used for the front and back feel very cheap. Then there’s the lack of support for VESA mounting, built-in audio and any movement in the stand at all. Granted, not everyone will choose a display based on just these features, but the lack of flexibility in the stand is particularly irritating.

There’s a good range of video inputs though. DisplayPort 1.2 and HDMI 2 are present for 60Hz 4K use, and there are DVI-D and VGA connectors for legacy connections as well. Meanwhile, the OSD uses physical buttons, with a general menu design that works well, using the traditional input method of left, right, up and down through the large on-screen menus.

In testing, the AOC 2879VF competes well with other 10-bit displays that. The brightness of 318cd/m² is a fine result, as is the 600:1 contrast. Its gamma is off by 0.2, the sRGB result is 95 per cent rather than 100 per cent, and the Adobe RGB result of 75 per cent is slightly lower than other displays. However, its deviation of 8 per cent isn’t too bad, and neither is the delta E colour accuracy of 1.23.

Unfortunately, there’s a downside to this low-priced display that the results don’t show. In use, the image is noticeably oversaturated, to the point where the image quality suffers greatly. Next to the other TN panel on test, Iiyama’s GB2888UHSU, it just doesn’t look as good, and of all the displays we tested this month, the AOC has the worst out-of-thebox subjective image quality.

The U2879VF might seem like a bargain, but it has many niggles, such as an oversaturated image, cheap materials, an inflexible stand and a lack of features. The same money will get a good 1080p or 2,560 x 1,440 display with superior build quality, image quality and more features. If you really want a 4K display, then you’ll be better off spending a bit more cash to get a superior screen.

A great price, but its image is oversaturated, the stand is inflexible and it lacks features.