Iiyama ProLite X4071UHSU Review – The proper screen size for a display is always a matter of both personal taste and personal space. However, all the other displays on test this month are dwarfed by Iiyama’s X4071UHSU-B1, which rivals TVs in terms of size. Indeed, it even includes a remote control. What’s more, it appears to offer amazing value for money. The secret is its 10-bit MVA panel technology, which sits somewhere between TN and IPS in terms of capabilities. It has the good 178-degree viewing angles of IPS panels, with a 3ms response time, high contrast ratios and deep black levels. 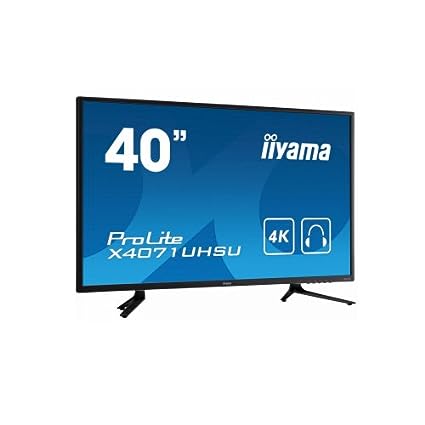 With 4K, there’s a practical benefit of using larger screens. With a 40in screen, you can use Windows as normal, without any need for scaling, with icons, text and graphics looking perfectly normal at their native resolution. Comparatively, even 32in 4K monitors require scaling to ensure usability.

Of course, being so large imposes some restrictions on the X4071UHSU-B1. The stand comes in two bracket-like pieces to support the 12kg screen on either side, and it isn’t very flexible either. There’s no way to make it pivot, rotate or move up and down. Worse, the brackets don’t seem to fit securely onto the base, and they don’t connect to the rear of the display either, so its weight makes it lean forward slightly.

Thankfully, though, VESA mounting is possible. It requires a 200 x 400mm mount, larger than the typical 100mm arms found on most screens, but we can certainly imagine businesses using such a screen for public information displays. In terms of connections, there’s only a DisplayPort input, but you get three HDMI ports, including one HDMI 2 connector, and legacy VGA support is included too. There are also two USB 3 ports at the side and a pair of 6W speakers.

Meanwhile, the OSD is controlled with physical buttons located directly underneath the right-hand side.

The menu system itself is similar to the one on Iiyama’s GB288UHSU, and it works well, and the picture-in-picture (PIP) mode, works brilliantly on such a massive screen. Iiyama has missed a trick by not going for a four-way PIP mode to display all four inputs at once, though, effectively giving you four 20in 1080p screens.

In our test results, the MVA screen of the X4071UHSU delivered the promised amazing contrast results, delivering a stunning ratio 3,180:1 and a black point of 0.12, the best blacks of any screen on test by a wide margin. It’s bright too, with a result of 385cd/m² and, while the Spyder 5 recorded a high white point of 10,300, the gamma result was out by 0.1. Even the power consumption of 58W is respectable, being only slightly higher than that of 32in IPS screens.

Measured accuracy was also quite good, with 87 per cent Adobe RGB coverage and 100 per cent sRGB, although the uncalibrated delta E was around 2. MVA panel technology certainly has its benefits.

There’s a subjective element to display testing that goes beyond simply flicking a colorimeter over a screen, and in the case of the XB4071UHSU, the main issue is its size. Games look great on it from a few feet away, but it’s overpowering if you’re editing Word documents or browsing the Web up close. If you’re looking for a 40in screen to hook up to a PC and a Sky box on your lounge wall (don’t use the stand), the XB4071UHSU is great for the money, but for desktop use, we recommend stepping down to a screen that’s no bigger than 32in.

Great value if you want a monitor on your lounge wall, but it’s too unwieldy to put on your desk.