Amazon’s mid-range tablet is the first to get Show Mode. Not only can you use the Alexa voice assistant hands-free, as with an Echo smart speaker, but it also works like the Echo Show, making better use of the screen to display web content found by Alexa. Currently, the bigger Fire HD 10 has hands-free but not Show Mode, while the smaller Fire 7 lacks both. The Echo Show itself, made for coffee tables rather than portable use, is being updated to a new model. 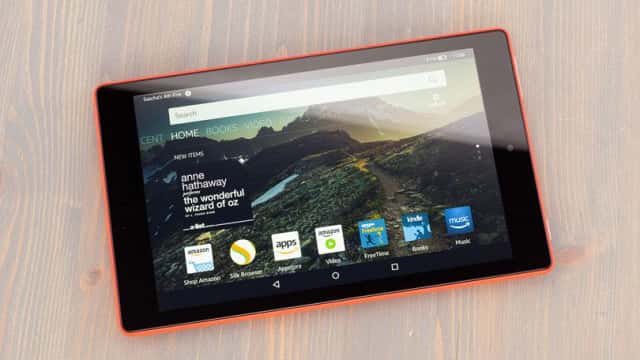 The Fire HD 8 is also available with a Show Mode Charging Dock. This consists of a shell case that you keep on the tablet plus a stand, connected to a USB mains charger, that switches the tablet to Show Mode when you pop it on and props it at an adjustable angle – handy for watching videos or following a recipe. You can use Show Mode without this, though, and having full-blown hands-free Alexa makes the Fire HD 8 even better value.

We’d be tempted by the 32GB model, giving you more room for apps and music without having to add a microSD card. As usual, ‘Special Offers’ are included by default, meaning Amazon shows adverts on the screen when you wake it up. You can pay an extra to buy the tablet without this, or go into Settings and opt out later, paying the tenner via your Amazon account.

A Kids Edition – with protective bumper case, 32GB of storage, a year of free videos and games and two-year accidental damage cover (but isn’t compatible with the Show Mode dock).

The only change to the tablet itself is that the really bad front camera is now an OK front camera.

The screen and processor remain just adequate, and Amazon’s Fire software still only supports a small subset of Android apps.

But with essentials like BBC iPlayer covered, it’s an unbeatable deal.

It's much less powerful than an iPad, but Alexa gives this compact tablet a unique bonus and it's fantastic value

Argos’s 16GB tablet, now with Android 7, has a bigger screen but no more pixels, and lacks Alexa