Acer makes plenty of monitors – so many that I found more than 35 of its 27″ displays on one popular online retailer’s pages.

Prices for some of them, so what would possess anyone to pay three times that much for the BE270U? 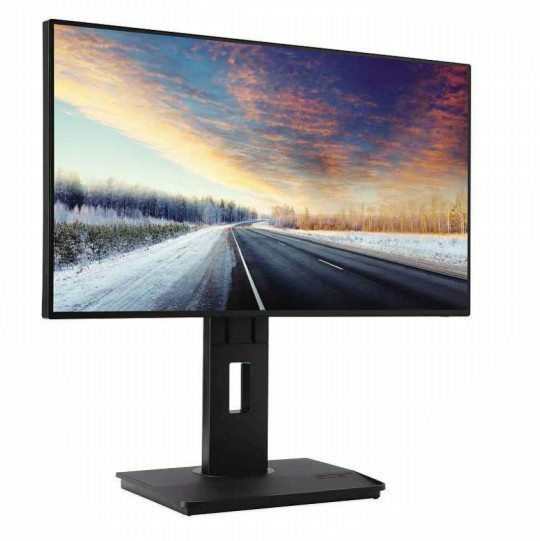 On this monitor, the clarity of the resolution is enhanced by a very crisp IPS panel that delivers 100% sRGB color coverage.

I’ll let others analyse the gamut and response profile, but it looked pretty good to me, perhaps with the slightest amount of backlight shadow on the far right and along the bottom.

Compared with some other WQHD screens I’ve seen, including ones from Acer, the aspect ratio is also a bit different.

That makes the pixels in this instance almost exactly square, making it ideal for photographic editing.

However, IPS technology isn’t ideal for gaming, although this monitor is AMD FreeSync compliant, even if the maximum refresh is only 75Hz.

Therefore, the BE270U is graphics designer focused, but with a nod to the occasional gamer.

Acer even threw in some tiny 2W speakers for those who watch HD media or streams on their systems but don’t care about audio quality.

I’m not sure why it bothered, because a headphone jack might have been more useful.

Audio was clearly not a focus, but it’s evident is how much effort Acer put into making this an elegant design.

Specifically, the borders around the screen are reduced to an absolute minimum in all four directions. It’s about 7mm on each side, and it didn’t even ruin the outer edge by having control buttons projecting from beneath.

Instead, these are on the very lowest part of the rear-facing lower right, and as counter-intuitive as it might seem, operating them there is actually easier than many I could clearly see.

Being able to grip the screen with a thumb and then find the right button with finger tips seems to work well.

However, the power cord does slightly interfere with the first button.

As standard, the BE270U comes with a very robust support arm that allows you a wide range of vertical movement, twisting and rotating.

The screen can therefore be quickly moved into a portrait mode and then back to landscape, although there isn’t any sensor, so explaining those changes is for the PC operator to do.

With a screen this costly, I was expecting lots of inputs, so my first real disappointment was that it has only two conventional ones in HDMI 2.0 and DisplayPort 1.2.

Acer didn’t bother with DVI or any cascade options for DP.

What it did include, unexpectedly, was USB 3.1 Type C, along with a USB 3.0 hub with four conventional ports. The placement of the Type C port isn’t as convenient as two of the conventional side-positioned ports, but once cabled, it provided a perfect way to fast-charge my phone.

Where Acer deserves some sort of award is in the cabling that’s provided as standard. Along with the power cord, you also get a DisplayPort, Type C to normal USB, and a Type C to Type C cable. Okay, it left out an HDMI cable, but most people have a dozen of those.

Having used this monitor for a week, the quality in it shines through.

The clarity of the screen, the ease of positional adjustment, the relativity correct settings out of the box – it all tells a story.

I still think it would have been better with DVI included, but in most other respects, the mix of functionality and features is good.

For business users who aren’t picking up the bill personally, I’m sure they’d be pleased to sit in front of this panel through a working day.

For home users, it’s difficult to justify this instead of something like the Acer K272HUL, which costs just 55% of this screen’s price, mm Mark Pickavance

High-quality monitor for those who work with visuals