WHEN A PHONE COMES OUT BOASTING AKM AUDIO CHIPS, AND PROMISING THE HIGHEST AUDIO QUALITY, WE THOUGHT WE OUGHT TO HAVE A LOOK AT SOUND QUALITY!

T he phone is the premium model for ZTE, one of the giant Chinese companies that you don’t hear much about in the consumer space. But if you were paying attention to the Mobile World Congress, you’d have noticed ZTE picking up a slew of awards for shockingly high performance from its 4G+ infrastructure.

Here the phone sells for – odd less than similarly specced phones from better known brands. Except none of them claim to have those chips. 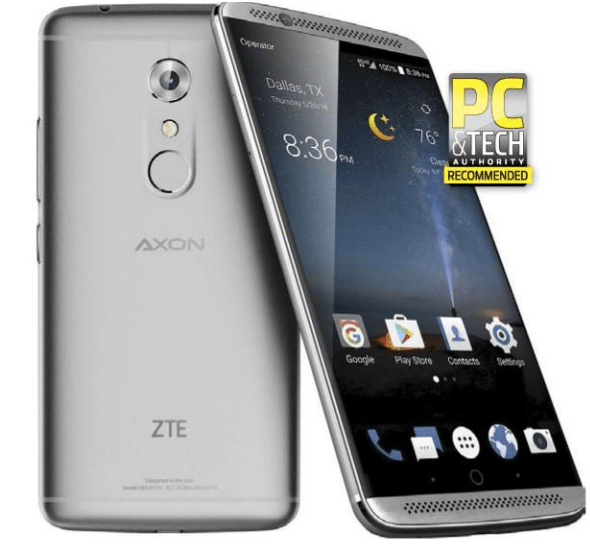 THE PHONE So, as a phone this is a large screen model – 5.5 inches with AMOLED in 2560 by 1440 pixel resolution, with Gorilla Glass 4 for robustness. It runs a fast Qualcomm Snapdragon 820 processor, has 4GB of RAM and employs Android 6.01 Marshmallow as the operating system.

It has space for either two SIMs or one SIM and a microSD card of up to 128GB.

There’s a back camera of 20MP, a front one of 8MP. It connects to the world via USB Type-C (hurrah!). It has a fingerprint scanner on the back for unlocking. And it has unusual audio facilities.

It has, unlike some phones, a headphone socket. It is – unusually it seems these days – located at the top of the phone where it belongs instead of at the bottom.

It also has two AKM chips, The ZTE website says that ‘the AKM 4961 HiFi Recording Processor combined with the AKM 4490 HiFi Audio Amplifier provide the best audio that can be found in any handset today.’ They may be right about the closing part and the opening part (the 4961 is an analogue to digital converter for recording), but the AKM 4490 appears to be a DAC rather than an amp if I read the chip’s datasheet correctly.

A very high quality DAC to be sure, which uses 256x oversampling delta sigma decoding, with support for 32 bit and 768kHz sampling, plus quad speed Direct Stream Digital. THD plus noise is specified at -112dB. There is a choice of five filter implementations for PCM conversion (of varying degrees of smootheness or sharpness).

So if I have read things correctly, we don’t know anything about the headphone amplifier itself, except what we can glean from performance. I did manage to glean a little. Also built in is Dolby Atmos decoding, which means Dolby Atmos faking. I played a little with this, and it did seem to change the character of the sound field, but failed to convince me with regard to a surround effect.

I should note that the phone came with a very handsome looking set of earbuds as well. They were largely white, with rose gold (to match the body of the phone) sleeves on the cables and the inline remote.

The earpieces looked to be shaped like those provided with the iPhone. I did not use them. Hard earbuds require one’s ears to conform, instead of them conforming to one’s ears.

The music player which comes with the phone looks pretty but had a couple of issues which made me use it only reluctantly. First, it was slow. I had dumped in about five and a half thousand tracks onto the SD card. What’s the point of having a 128GB SD card in a phone unless you use it for media, after all? So perhaps the slowness was due to too many tracks.

The player opened on a default screen and to get to the index screens – All Songs, Artist, Albums, Genres – you have to touch a section called “All Songs”, and then wait three to five seconds before the screen would first appear and then be populated. It always opened on “All Songs”, as the name suggested, rather than Artists or Albums. So then it was necessary to touch “Artists”, and that took quite a while to fill. In fact, opening up the Artists screen took about 17 seconds in total. I imagine it’s faster with a smaller music collection, but likewise would also be slower with a longer one.

Secondly, songs were presented alphabetically ordered based on the “Title” field in the ID3 tags, not by track number, and played in random (‘shuffle’) order. I could find no way to make them play straight through in track number order. On the much better side of things, while the Android warning about turning the phone up too loud appeared occasionally, it didn’t appear all the damned time! The app was certainly happy to find all the stuff I piled into various folders in the phone, including MP3, FLAC (up to 192kHz) and AAC. Excepting, though, DSD which it did not recognize. Which seems a bit odd given the DAC support.

I did most of my testing using USB Audio Play PRO software. It is capable of delivering DSD to an external DAC, but was unable to recognize the DAC capability of the internal one (perhaps because Android was mediating matters), so it converted DSD to 176.4kHz PCM for internal consumption.

The phone also supports OTG (On The Go) connections so you can use an external DAC should, for some reason, you find the internal performance to be of insuicient quality or you insist on hardware decoding of DSD.

I don’t normally bother to comment on the sound quality, such as it is, of internal speakers on phones. Goodness, what can you expect? But I do have to remark on this phone. It has two long and skinny sets of perforations on the front, one near the top and one near the bottom of the phone, and it uses these as a stereo pair: left at the top, right at the bottom. Prop the phone up sideways to enjoy stereo. By comparison to most phones, the quality was actually quite good. There was a touch of lower midrange – I wouldn’t deign to call it any form of bass – which improved things considerably compared to most phones.

Incidentally, there are also three microphones – one on the top, one on the bottom and one I don’t know where – so that ADC might have some good material to work with. But I didn’t look into that.

They will consequently suffer from frequency response variations, with peaks at the frequencies where their impedance is high, troughs where it is low.

The ZTE Axon 7 unfortunately appears to have a resistive load in line with the headphone output of around 63 ohms, or so my calculations from the output drop at various loads suggests. So while the output with a full scale sine wave was around 0.91 volts RMS into a 47kOhm load, it dropped to about 0.75 volts into the 295 ohm test load, and 0.18 volts into the 15.9 ohm test load. That meant that the output peak was around 2.8dB above headphone sensitivity for high impedance headphones, and 3.2dB for low impedance ones. For comparison, iPhone 6s and Samsung Galaxy phones typically provide about at leat 9dB of output above headphone sensitivity (14dB for the Samsung).

The efect on frequency response will depend entirely on the headphones used.

As it happens I used a pair of Sennheiser Momentum In-Ear earphones (M2 IEG) for in-ear work, and a pair of Oppo PM-3 closed back planars for over ears work.

Both of these are reasonably sensitive within their categories and both lowish in impedance (18 ohms for the former, 26 for the latter). And both have been tested to present dead even impedance loads across the spectrum. In both cases, calculations suggest peak outputs with this phone of perhaps 105dB. Given that there was no clipping at the output, that’s probably enough. I could certainly wind the phone up with both sets to uncomfortably high levels without any distortion.

With both sets of ear gear, this phone sounded great. It was bright but well balanced, and with first class detail in the sound. As I mentioned, the volume was loud enough – although some who really want extreme levels may be disappointed. It really is a pity about that inline resistance.

I’ve given much of the measurement game away already with the above discussion, but to recap. I used three signals – 100 hertz, 1002 hertz and 10,000 hertz – all sine waves modulated to peak at full digital scale. Then I turn up the output A fairly clean Android skin at various loads to see the maximum output before clipping. With this phone, there was no clipping even at maximum volumes. With my 295 ohms test load, at all three frequencies the phone was capable of delivering around 1.9mW. But with the 15.9 ohm load, this increased to only 3.2mW. Even modestly endowed phones like the LG G5 manage 4.7mW, while the iPhone 6S produces 9.4mW and the Samsung Galaxy S7 gets to 24mW.

With 96kHz, 24 bit sound the noise and distortion performance was identical.

Distortion levels were similar with 16 bit, 44.1kHz signals, and noise was an impressive -97.8dBA. There’s a very slight roll of in the higher frequencies to -0.2dB at 20,000 hertz, at which point the output hits a brick wall.

So look for headphones with flat impedance curves (good luck finding that in specifications though!) and fairly high sensitivity, and all should be fine.