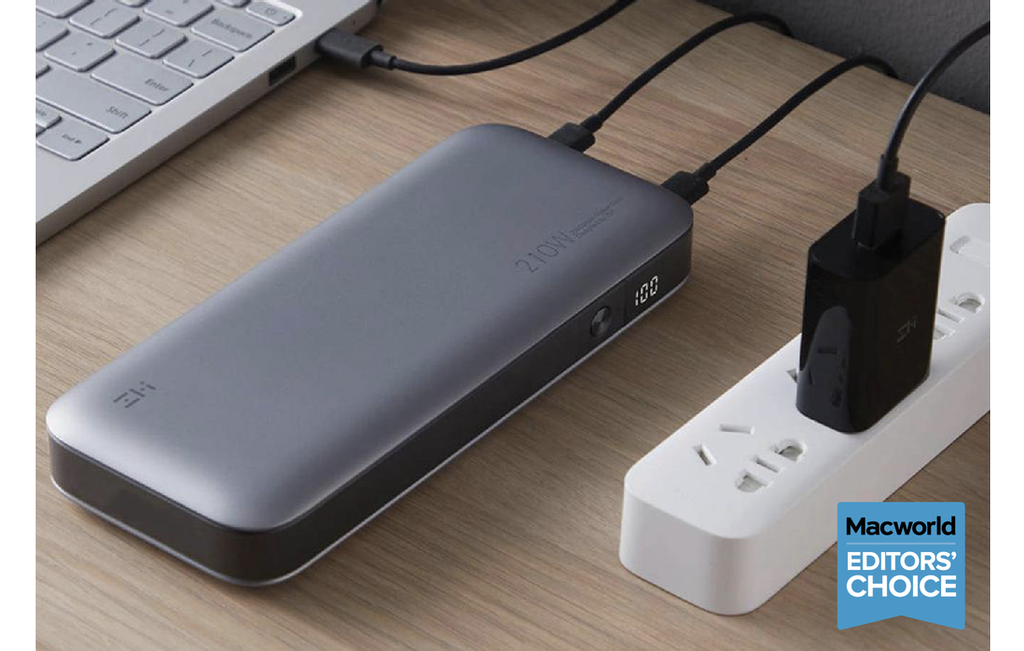 The ZMI PowerPack No. 20 (Model QB826G) is the closest thing I’ve seen in many years to the kind of outboard laptop battery popular in the days when batteries burned through stored energy as quickly as sparklers. The PowerPack No. 20’s prosaic name hides its massive output: up to 210 watts across three output ports simultaneously!

The name also undersells this sleek, surprisingly dense gray and black lithium-ion power pack, which has ports just on one end to access the 90 watt-hour (Wh)/25,000 milliampere-hour (mAh) battery. That’s about 50 percent more than an M1 MacBook Pro’s battery. (ZMI lists 3.63 volts and 90Wh; the MacBook Pro has a spec of 58.2Wh, and we can back out from the battery’s known mAh to get 11.3V as its discharge rate.)

You’ll pay a price for it: $, the current discounted price direct from ZMI, isn’t spare change. But given the wallop the power pack packs, it’s hard to complain the company charges too much.

The power pack has two USB-C ports and one Type-A port. Both USB-C ports double as inbound and outbound charging connections. The one at left when facing the ports—and labeled in incredibly tiny gray-on-black type as IN1/OUT1—can charge at up to a blazingly fast 100W with a USB-C cable and adapter rated for that. The second USB-C port (IN2/OUT3) maxes out at 45W.

The three ports have a similarly absurd amount of output power, and automatically adjust across a wide range of voltages based on the cable attached:

The combined output can’t exceed 210W simultaneously across all three ports, but you could conceivably charge three M1 MacBook Pros to 50 percent at the same time (two of them at maximum speed) before the battery was exhausted.

ZMI notes that you need a “genuine USB-A to USB-C cable” to achieve the top charging rate on the Type-A port, which is hard to parse, but the company makes it easy by including the kind of cable in question, and you can tell it from any other cables you have based on the orange plastic on the inside parts of its Type-A and USB-C connectors.

The company also includes a short USB-C to USB-C cable rated for up to 100W, which is a great substitute or backup if you have a laptop charging cable that’s in use.

ZMI also incorporates a special low-current charging mode for Bluetooth and similar devices that work off the Type-A port. To enable, it simply requires double-pressing the “capacity check” button on the battery’s side next to a three-character LED display.

The LED display provides some feedback and details about what the PowerBack No. 20 is up to. While charging, the current capacity is shown as a percentage and the last digit flashes until fully charged; while providing power to an attached device, the current charge level flashes. (A translation problem refers to the LED display as a “nixie,” a kind of tube-based display invented in the 1950s and now an object of tech nostalgia.) 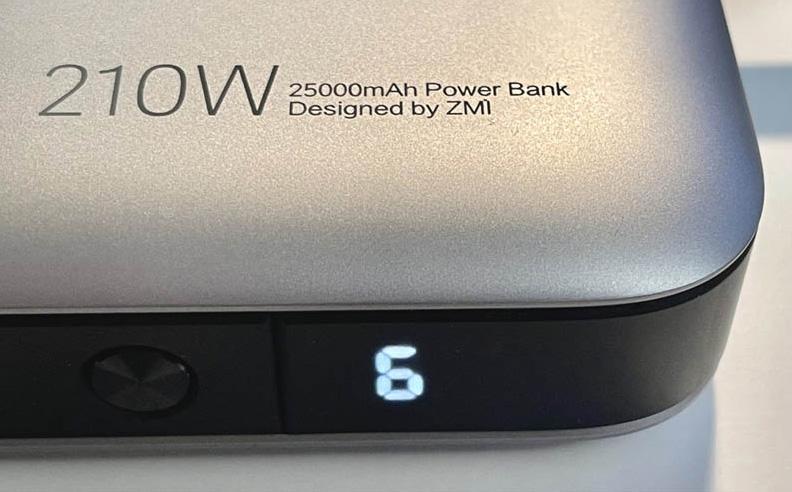 The only negative about the product is that while an accompanying manual has a few crucial and useful details, it is set in type smaller than 5 points. Whether your eyes are young or old, that’s simply too small. The manual is also one of the worst translated I’ve read in years—particularly problematic with a lithium-ion battery that comes accompanied by a list of precautions and warnings. Nevertheless, we all have pocket electronic magnifying glasses and can work out the sense.

On the positive extras side, ZMI’s design is a thing of near perfection. It has almost the perfect minimalism of an Apple product, with the fewest possible buttons, display elements, and ports to provide a powerful product that makes no compromises—even on charging the right price.

The current $ is a bargain for those who need this kind of on-demand power and the ability to recharge a power pack quickly. Until recently, many high-power-output batteries took multiples of their discharge time to recharge, making them less useful for travel and emergency purposes. ZMI has it all going on both ways.

Run a Ghost blog on your server