Xubuntu 19.10 is the latest release for this Ubuntu derivative that features the Xfce desktop. Just out on 17 October, 2019, it is the 28th version of Xubuntu and the last “standard” release before the next long term support (LTS) release, due out on 23 April, 2020. Read our Xubuntu 19.10 Review.

Like most Flavors of Ubuntu, Xubuntu tends to use the three standard releases in between LTS releases as a testing ground For new software, with the aim of getting it as polished as possible For the LTS. In this case, that major change was the introduction of version 4.14 of the Xfce desktop, which has been under development For Four and a half years. First appearing in this release, 4.14 uses the GTK3 widget toolkit. It provides a very similar user experience to previous versions of the desktop, with most of the key changes all behind-the- scenes and out of sight to the users.

From a user point of view, there are only small differences between 19.10 and the previous release, 19.04.

In this release, Atril replaces Evince as the default PDF viewer, and Pidgin supplants XChat as the Internet Relay Chat (IRC) client. 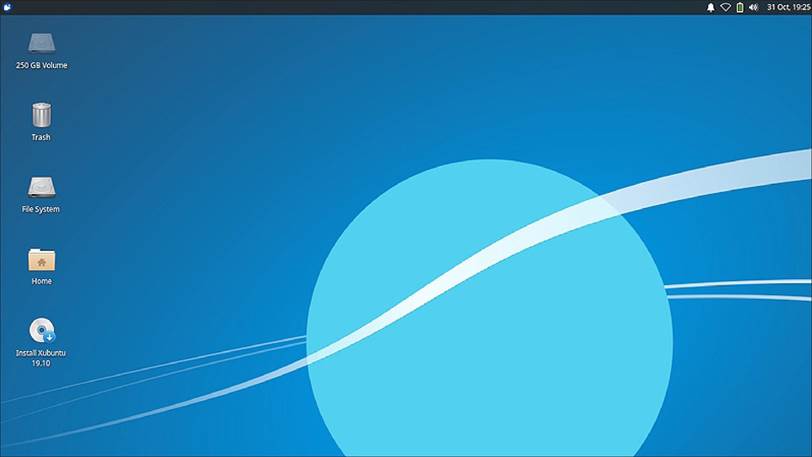 The recently developed Xfce Screensaver (package name: xFce4- screensaver) replaces Light Locker as the screen saver/screen locker. This is a good move, as Light Locker has proved to be troublesome in recent releases. Lubuntu also moved away From it a year ago with Lubuntu 18.10.

The ZFS File system and logical volume manager is available on root in this release, but the developers warn that it is experimental and not to be relied upon yet, going so Far as to include a bold text warning in the release notes to that eFFect.

Some of the applications included with Xubuntu 19.10 are:

As in recent releases, Xubuntu 19.10 does not include a webcam application, although Guvcview and Cheese can be easily installed From the repositories.

Like all Xubuntu releases since 14.04 LTS, 19.10 uses the excellent Whisker menu. Whisker launches all applications, starting with a “Favorites” list, but offers quick access to all other applications via sub-menus. It also controls logouts, reboots and shutdowns, as well as screen locking. Unique among Linux menus, it can be easily customized and even quickly resized by dragging. It is launched by clicking the Xfce “mouse” logo on the panel. The only Function it doesn’t offer is “minimize all windows”, but with 19.10 and Xfce 4.14, there is now a keyboard shortcut for that: “Super+D” (Super is the “Windows” key on most keyboards). “Super+L” also locks the screen.

The Xfce panel (task bar) is by default Found at the top of the screen, but can quickly be unlocked

and moved to the bottom or either screen side. When used vertically, it can be set to display its icons vertically-oriented too.

Since Xubuntu 19.04, LibreOffice is now supplied almost complete, missing only LibreOffice Base, the database application. Most people don’t work with databases, so will not need it, but it can easily be installed From the repositories.

The Thunar File manager is the heart of Xfce and is integrated with the Ristretto image viewer, as both share the same properties dialogue boxes, allowing image ExiF metadata to be viewed in either application. Thunar also includes a bulk File renamer, accessed by highlighting two or more Files and then hitting F2.

The default text editor continues to be Mousepad which has a wide variety of choices For syntax highlighting, making coding or writing web pages much easier. As in past versions, all it lacks is spell-checking to be Fully Functional.

This Xubuntu release has default wallpaper that is very similar to the last three. It is rather dull and uninspired compared to the Xubuntu wallpaper From the 14.04 to 15.10 period, but it is easy to replace. Xubuntu 19.10 comes with 17 alternates, some of which are quite good, plus, of course, you can always substitute your own.

The default window scheme continues to be Greybird, which is not my Favorite as the active and inactive windows all look too much alike. The good news is that there are Five other included window schemes to choose From. The bad news is that, as in the last release, none of them are much better in providing decent active/inactive window differentiation.

As with Lubuntu 19.10, on Xubuntu 19.10, I had issues with my old 2011 model System76 laptop touchpad networking right, dancing the cursor all over the place. The solution on Lubuntu was to select “two-finger scrolling” in place of edge scrolling. With Xubuntu it worked best to turn off touch-pad scrolling altogether and dial down the sensitivity; then it worked Fine. This may be an issue with my old hardware and the current drivers, so other users may not see this issue.

With 28 releases, Xubuntu is a very mature operating system. It provides users with a solid, stable, elegant desktop experience that is quick to learn and very easy to use. Mostly it lacks unnecessary Flash and bling, and instead stays out of the way and lets users get work done and very efficiently, too.

Xubuntu 19.10 is a release that brings small, incremental changes, with updates and polish that all bode very well for a good, solid spring 2020 LTS release.