It seems that using a cleaning tool on your PC is an increasingly hazardous way to deal with junk files. CCleaner’s descent from brilliant tool to potential privacy threat is well documented. But at least it’s still an effective junk remover. Win Tonic (www.pctonics.com), which claims to be an “All in One PC Maintenance & Protection Tool”, is an even worse offender. Installation is the usual minefield – dodging extra programs you’ll never need. But the real junk here is the program itself.

Security firm Symantec (which makes Norton) recently classed Win Tonic as “a potentially unwanted application that gives misleading information about issues on the computer”. So, basically, it ‘scans’ your PC and makes up fake problems.

Besides that, it asks you to pay actual money to fix these fake problems. On my computer, for example, Win Tonic claimed to have unearthed 992 unwanted items, including 124 alleged ‘Junk & Privacy items’ (see screenshot), warning 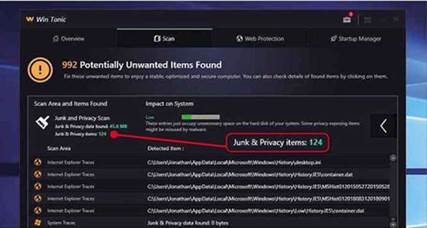 None of these files found by Win Tonic were harmful

In fact, all the items listed by the scan were standard system files and completely harmless temporary files. Clicking the Fix All Items button leads to a web page requesting that you pay the bargain (reduced from £89.99. apparently) to remove these ‘threats’.

Once you begin to realise that Win Tonic is as useful as a chocolate teapot (and I’d imagine way more expensive), you’ll want to remove it pretty swiftly. Uninstall it through Windows 10’s App settings and you’ll be taken to a web page claiming “You’ve successfully uninstalled Win Tonic”. But – guess what – Win Tonic leaves behind a ton of garbage in your system folders and your registry, so you’ll need to install a genuine junk cleaner – BleachBit (www.bleachbit.org), for example – to clean all the junk left by the fake one.