Three months ago, Magix (well known for its video editing software) acquired many of the multimedia products from Sony’s Creative Software Catalogue. Among them was Sony’s acclaimed video editor Vegas Pro, a sophisticated editing solution used by many professional film makers and video editors. 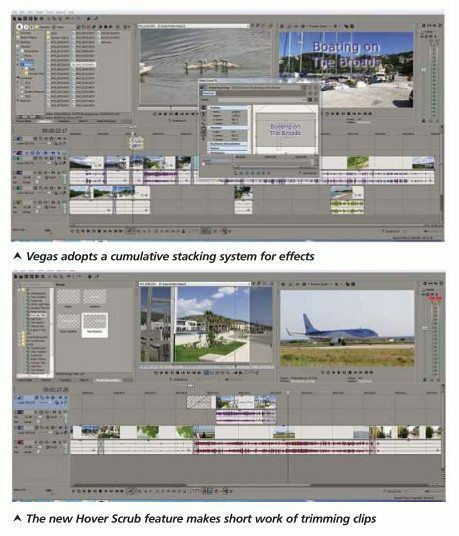 I am quite familiar with Vegas Pro, although it’s been a while since my last review, so it will be interesting to see the new features added since the Magix team took the helm.

You’ll see that the Vegas interface is somewhat different, both in design and function to any other editing solution you’re likely to come across. Of course, there are common elements, like the tracks carrying the video footage and the video preview monitors, but the methodology and particularly the way effects are handled is totally different. If, for example, you wanted to add a title, lower third or commentary to a clip, you simply right-click and select Insert Text’.

That opens the title dialogue with its comprehensive text controls, including color, font, position and animation. At the same time, it displays two more icons on the inserted text. These provide further access to the crop and pan dialogue and video events FX collection, containing a massive range of effects. You can take that a stage further by combining them in a chain of other plug-ins, creating accumulative effects that would be impossible in most other software. However I have to admit with all this at your disposal, it’s easy to get carried away, to the point where the effects overpower the content of the video – a case in point being the dreadful overuse of handheld shots in many current movies.

One of the most useful new features is Hover Scrub, which allows you to (extremely quickly) select the in and out points of a clip in the trimmer window. As you move your mouse over the window, the cursor follows the mouse position, effectively scrubbing through the clip. To mark the in and out points, you simply hold down the shift key and click the left mouse button. The first click marks the start frame, and the second the end one.

Another new range of features are designed for adapting old footage to blend into new productions, without any appreciable loss of resolution or image quality. They harness the processing power of your GPU to perform this magic, so you’ll need a fairly powerful GPU to render the frames. The options include Smart Zoom, Smart Upscale and Smart Adaptive

Deinterlace. It took a while to render some old footage to HD on my review machine, but I must say the results were perfectly acceptable. In truth, these plug-ins are intended more for upscaling HD to 4K, but since I don’t possess a 4K camera, I didn’t have any 4K footage to test it on.

I was surprised to see the vignette effect billed as a new feature in this release, which I’m sure has been available in other editing software for some time. I guess Magix thought it was time that Vegas had one as well. The developer has also added hardware support for a number of third-party capture and recording devices, mainly from Blackmagic Design, although i found the Contour Shuttle I reviewed a few weeks ago works perfectly with Vegas 14.

In common with other Magix products, there’s a free 30-day trial available on the company’s website, as well as a version comparison chart to help you decide which package would suit your needs.

A new addition to the Magix range that certainly lives up to expectations.