Uruk GNU/Linux 2.0 – After all the festive excesses and numerous regrets, Jonni Bidwell settles down and resolves to live a life more libre in 2018.

» A lightweight, libre distribution aimed at people who care enough about open source values to make a few sacrifices. It’s based on the respected Trisquel GNU/Unux. and sports a customized MATE desktop, embellished with some Compiz shinyness. See also: Trisquel. Debian, Parabola.

The more cynical may be tempted to substitute phrases like ‘‘missing features” “awkward to use” or even “you’ll need to buy an Intel Wi-Fi adaptor” when they see Linux distros touting software freedom. Those naysayers would do well to check out Uruk. Obviously, it’s not for everyone, and being effectively managed by a team of two. Ali “miracle” Abdulghani and Hayder “ctee” Majide. don’t expect Ubuntu levels of community support. That being said, there’s a mailing list and an IRC channel, and the developers are clearly passionate about their project.

Uruk is based on the software freedom (https://trisquel.info) centric Trisquel and as such uses the deblobbed Linux-libre kernel (see www.fsfla.org/ikiwiki/selibre/linux-libre). In this version you’ll find Kernel 4.9. which will seem fairly aged to some, but Ubuntu 16.04 distros with the HWE stack are only running 4.10. and what’s a minor version between friends? Likely software freedom advocates are less interested in bleeding-edge features than having a wholesome kernel. 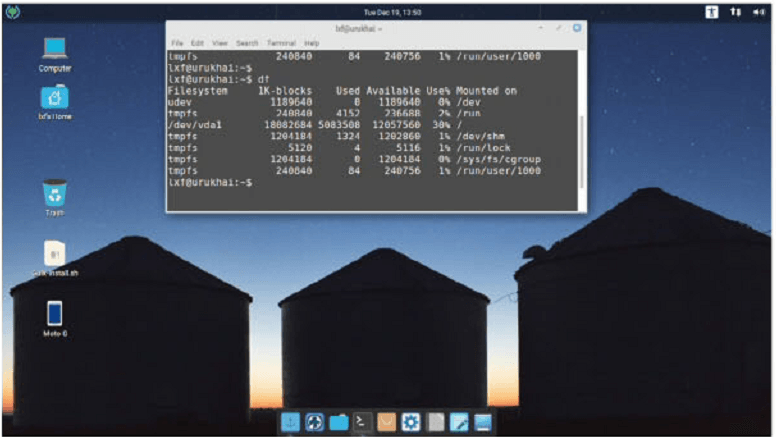 Like so many Ubuntu-based distros, a clean install of Uruk occupies 5GB. But unlike those, Uruk cares about software freedom.

Uruk was. of course, a kingdom of Sumeria (in modern day Iraq, from where the developers hail), and the distro is codenamed Lugalbanda after that kingdom’s mythological second king, the father of Gilgamesh in the literary tradition. We’re not sure what makes a distribution kingly, but the fact that the screen reader is activated by default certainly struck fear into us.

Once that was safely quietened, we found a satisfyingly clean take on the MATE desktop, complemented nicely by the Plank launcher. On the desktop there’s a script to install Guix. which unfortunately didn’t work for us (it needs to be run as root from the terminal, whereupon it complains about a syntax error and then summarily deleted itself, oh well).

Installation uses Ubuntu’s Ubiquity, so you’re in good hands and unlikely to run into difficulties installing alongside other distros. You’ll also find Ubuntu’s Software Centre. sans any hint of proprietary nasties. The default web browser is Abrowser, the libre fork of Firefox that blocks non-free add-ons. DRM. telemetry and tracking by default. It uses the privacy-centric Duckduckgo search engine and includes the uBIock origin ad blocker. Check our Distrowatch pages to see what else is included.

Uruk has an impressively impartial approach to package management. At its heart it uses apt to marshall everything, but thanks to the Package Managers Simulator you can use commands from all the usual suspects, as well as GNU’s own Guix. Installing packages from source can be tricky affair, but Uruk includes the impressive u-src command, which takes care of everything for you. Theoretically anyway. It’s hard to find good documentation for this tool, and it seems to only work for .tar.gz sources that follow the standard ./configure && make recipe, but that covers a lot of bases. You’ll need to install the build- essential package group for it to be useful. We tried it with the latest version of GNU Chess which worked well.

Ideally we’d like to see this using checkinstall so that the installed binaries could be treated as a package and managed natively, but maybe this will happen in future. There’s a few rough edges to clear up here, but we hope to see more of team Uruk soon (don’t invite the ores to LXF Towers again, they left a right mess -Ed).

Features at a glance

An image of the whole distro is available, so you can try it with a simple docker run alimiracle/ urukos /bin/bash.

The package managers simulator means you can use apt, yum, dnf or zypper commands to manipulate packages.

» An impressive effort with a lot of potential. Lack of documentation makes it unsuitable for new users, though.

An impressive effort with a lot of potential. Lack of documentation makes it unsuitable for new users, though.