Ubuntu 21.04 is the 34th version of Ubuntu and the eighth one since the move to the Gnome 3 desktop with Gnome Shell. This release is supported for nine months, until January, 2022.

I downloaded Ubuntu 21.04 via bit torrent, did a SHA256 sum test on it to make sure it was downloaded correctly and then used UNetbootin to write it to a USB drive for testing.

This version does not do a file system test on boot-up from a USB drive, not even as an option, which is unusual and may be related to the use of Wayland by default in this release.

When running from the USB stick, Ubuntu 21.04 runs fast and smoothly. Ubuntu continues to use a highly modified form of the Gnome Shell that looks and works much like the old Unity interface did. The application windows even have minimize and maximize buttons added, which Gnome otherwise removed. The desktop has a slim top bar with the date and time, along with other key controls. In a lot of ways, the degree of modification required does show how much functionality is lacking in Gnome that needs addressing to create an efficient 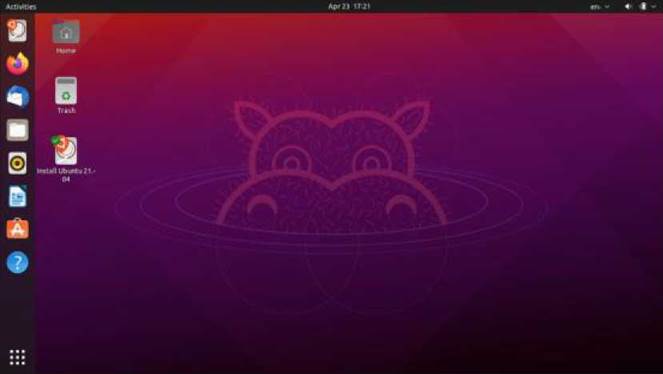 The recommended minimum system requirements for Ubuntu 21.04 have not changed since 20.04 LTS and remain:

•     Either a CD/DVD drive or a USB port for the installation media.

The first thing you will see on boot-up is the hippopotamus themed wallpaper, since this release is Hirsute Hippo. The wallpaper is very, very dark. The number of alternate wallpapers has been cut down to a bare minimum of four this time, all of them with hippopotamus graphics or photos. If you don’t want a hippopotamus on your desktop, there is always the option of using your own choice of wallpaper instead.

Other than new wallpaper, this version of Ubuntu does not introduce many new user interface changes and instead focuses on hardware support through a new version of the Linux kernel, version 5.11.

Linux 5.11 includes support for Intel Rocketlake and DG1 graphics, as well as AMD Vangogh, Green Sardine, and Dimgrey Cavefish graphics, along with many other enhancements. It is worth noting that Ubuntu Server 21.04 has lots that is new, and that seems to be where a lot of the development work is being focused these days.

This release does have a few new items for desktop users, however, including an implementation of the Wayland display server protocol by default, in place of X11, something that has been many years coming. Wayland should run automatically on all hardware, except those using Nvidia graphics cards, which will still default to X11. Wayland does seem to run seamlessly and should 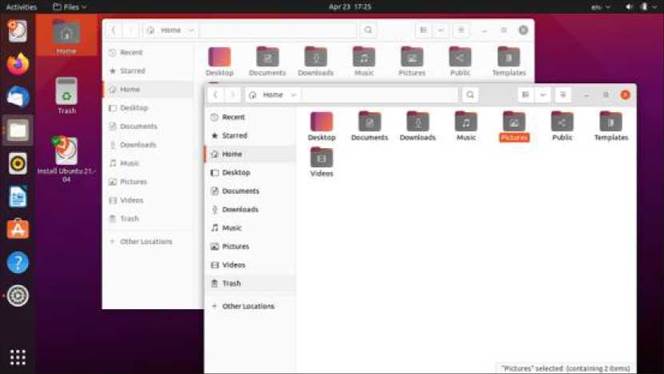 give improved performance over X11.

Proper drag-and-drop functionality between the file manager and the desktop has also been restored and works well. It was deleted in Gnome 3.28 and many users were not happy with that as it limited the user’s choice of how to make use of their desktop.

Ubuntu 21.04 includes one new default application, LibreOffice Math, the math formula writer that was omitted in Ubuntu 20.10. I am not sure many desktop users will notice the addition, however, as this is probably the least used LibreOffice component.

One thing that is not new is the current Gnome version, Gnome 40. Yes, that is a whole new version numbering scheme for Gnome, for some reason. All you need to know is that Gnome 40 is the version that follows 3.38. Due to a multitude of concerns that the Ubuntu developers have with Gnome 40, they have stuck with Gnome 3.38, at least for now. Only a few individual applications have been upgraded to their Gnome 40 versions, like the Document Viewer (Evince) and Gnome Disks.

Other than the meager choice of wallpaper, user setting choices on Ubuntu 21.04 are as limited as in other recent Ubuntu releases. Ubuntu really feels like it is aimed at “enterprise” environments more than home users, and I was not surprised to see it in use in a local medical office a few years back. This sort of office priority doesn’t seem to require a lot of user 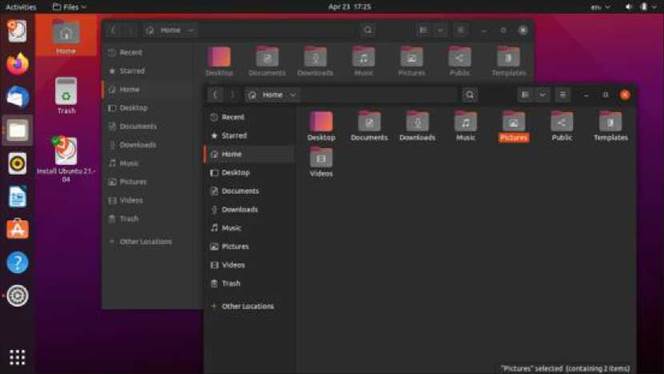 customization and so, for instance, there are only three window themes: light, standard, and dark. Dark is really dark, too, especially when used with the really dark default wallpaper. Some of the general menus now use default dark backgrounds as well. I am sure fans of dark themes will approve. The light theme is the only one that gives any differentiation between active and inactive windows, though.

The application launcher bar allows some degree of customization. By default it is on the left, but it can be set to the bottom or right of the screen, but not to the top – where it would conflict with the menus displayed there. The launcher icons can be adjusted in size, larger or smaller, as well, which is useful for some hardware, like touchscreens.

Overall people coming from distributions like Kubuntu, which has thousands of settings, will not be happy with Ubuntu these days with its very limited user choices. Users used to Macs or Windows will probably find it fine, though.

One thing that is worth mentioning is the Ubuntu settings menu, which is excellent. It gathers all the user settings into one place, in a simple and logical format that allows paging through it and easily customizing your installation. It remains probably the best settings 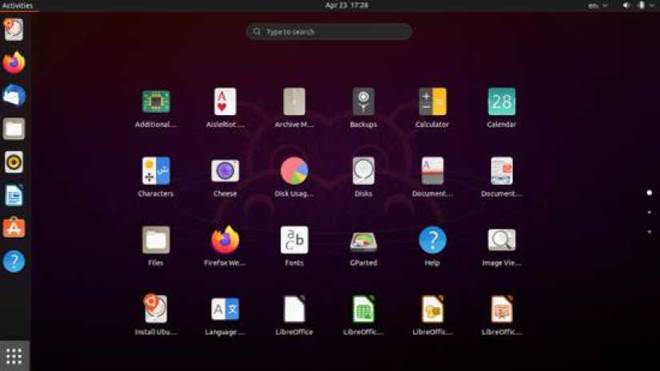 menu in the Linux world.

Some of the applications included with Ubuntu 21.04 are:

As in all recent versions of Ubuntu, there is a webcam application, Cheese, but no CD/ DVD burning application. This makes sense, as modern laptops and desktops come with cameras, but not optical drives and haven’t done so for many years now.

The LibreOffice 7.1.2 office suite is now complete, except for LibreOffice Base, the database application, which can always be added if needed.

As I have noted before, Files (Nautilus), the Gnome file manager, contents A remains the weakest link in the desktop, missing obvious functionality, like an “up one level” button, ever since it was subject to an overzealous Gnome simplification drive a few years back. The good news is that it is easily replaced with a better file manager, like Nemo, for instance.

Also, as in recent Ubuntu releases, the Ubuntu Software store (Gnome Software) is really just a Snaps-only store. If you like Snap applications, this will make you happy. If you don’t like Snaps then it won’t, although there are ways to disable it and return to properly desktop-integrated .deb packages instead.

Since this is the 34th release, you really expect that the developers would have Ubuntu right by now and they do. In running Ubuntu 21.04, it feels very professional, smooth and polished, with no rough edges found anywhere.

So far in this development cycl,e we have seen very few substantive changes. Perhaps the most important is the use of Wayland by default. Even though that is a developer accomplishment, it is pretty much “user-transparent”. So far, the next LTS release, 22.04, is shaping up to be very similar to the last LTS release, 20.04, and that is actually a good thing. In a mature distribution that already works well, like Ubuntu, wholesale changes are not needed and would cause a lot of user unhappiness. Ubuntu users today largely like how Ubuntu looks and works, and don’t think much in the way of changes are needed. People who don’t like Ubuntu are probably already using something else. 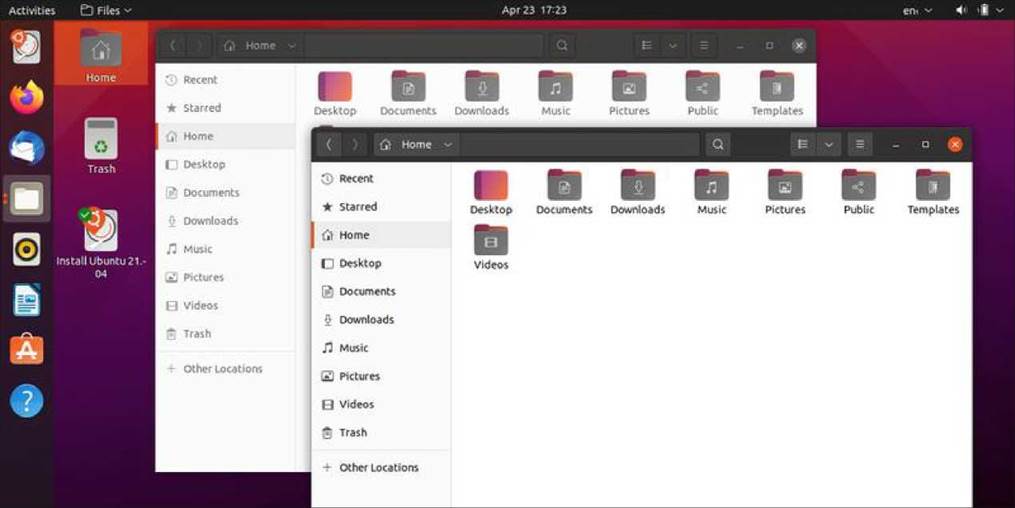 With so little new for desktop users in this release, I suspect most people will keep running 20.04 LTS until 22.04 LTS comes out in April, 2022. With only nine months of support, Ubuntu 21.04 does make much of a case for LTS users to upgrade.

When the next release, Ubuntu 21.10, comes out in October 2021, I’ll have a look at that final release before the LTS, and see what has changed. My guess today it will not be much, just small refinements.