SwagArch 2017.07 Review – When working with Arch-based distributions, Shashank Sharma always tries to gauge how far the apple has fallen from the tree… 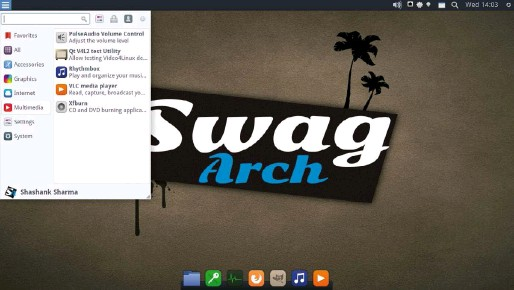 – Despite its name, SwagArch is a rather vanilla Linux distro, offering neither bling nor a vast set of default applications.

» A live, installable distribution based on Arch Linux. Doesn’t ship with too many applications out of the box, but the Calamares installer enables users to ease into the world of Arch Linux, without going through a long installation. Manjaro Linux is another Arch derivative featuring XFCE.

If you don’t mind the lengthy installation process, there’s no beating Arch and Gentoo.

The beauty of Arch is the level of control it offers users in moulding the distro to their liking. Aside from a set of core utilities, it enables users to choose exactly what to install on their machine. In comparison, derivative distros such as SwagArch feature a desktop environment and a number of useful everyday apps such as Firefox, LibreOffice and media players, among others.

The distro features the popular distro- neutral Calamares installer and launches it as soon as you boot into the Live environment. But you can quit the installer to explore the distro first. While there’s no mention of minimum system requirements on the website, SwagArch installation failed on our test machines with less than 4GB RAM.

The partitioning step gives two options: erase entire disk, or manual partitioning. The first option will allocate twice the size of RAM for swap and use the rest for the / partition, formatted to ext4 by default. If you prefer a different filesystem such as ext3 or resiserfs, or would like to configure LVM, you must choose manual partition option. Thankfully, the partitioner is easy to use, and you can click-drag to select the size for a partition.

Avoiding duplication of effort is one trick derivative projects adopt to ensure a smaller footprint. This is why Arch Linux derivatives, such as SwagArch, rarely offer any native documentation, instead trusting users to avail the vast repositories of Arch instruction base to troubleshoot any problems. While there’s nothing wrong with this approach, as a project matures and begins to build a dedicated user base, it’s imperative to provide a means for the community to interact with one another so as to learn from the experiences from peers.

SwagArch doesn’t have a dedicated wiki, forums, mailing list, FAQ or any other resource to help familiarise you with the project. Instead, its Google Plus page serves as the only means to communicate with the developers and other users and seek answers to problems you may encounter when running the distro. The single-developer distro also doesn’t host its own software repositories, but enables you to tap the sizeable Arch repositories using its graphical software management tool.

However, the lack of a to-do list on the website, goals for future releases, and no mention of a reason for its existence are a cause for concern.

Unlike the release cycle, which involves various rounds of alpha and beta releases before the unveiling of the finished product to the masses, distros often announce their demise with almost no warning, as happened recently with Apricity OS, an Arch­based distro which we reviewed favourably in LXF216.

While SwagArch is an easy-to-use and configure Arch derivative that can help you set up a rolling release distro in a matter of minutes, one wonders if the distro will still continue in the years to come or announce its sudden death as the lone-developer’s full-time job and other responsibilities take over.

If you’re interested in a rolling­release distro, a more mature project such as Arch Linux itself might be a safer option. You can also try Manjaro Linux, another Arch derivative featuring XFCE. If you prefer working with RPM packages, you’d be better served with OpenSUSE Tumbleweed.  » Best to stick with a more established distro while SwagArch matures and slowly builds its userbase.

SwagArch remains true to Arch’s ideology of letting users mould the system to their exact specifications.