Introducing the Skullcrasher, lord of loudness

Sennheiser GSP 600 Review – Having your head squished like a grape by a piece of audio hardware has never been quite so satisfying as it is with the Sennheiser GSP 600. It is, by some margin, the stiffest headset we’ve clamped to our collective skulls in some time. Not that we found it uncomfortable, just firm. The earcups—foam-clad and large enough to swamp giant ears—are soft even under compression, with a suede-ish inner that caresses the head without getting sweaty. The band, a pliable semi-split plastic number, has its own padding, widely spread and generous, rather than the targeted small pads of some other headsets. Each cup floats on its own metal arm, offering a small amount of X and Y rotation to fit any face, and two movable bars on the band enable you to tweak the point of contact pressure. 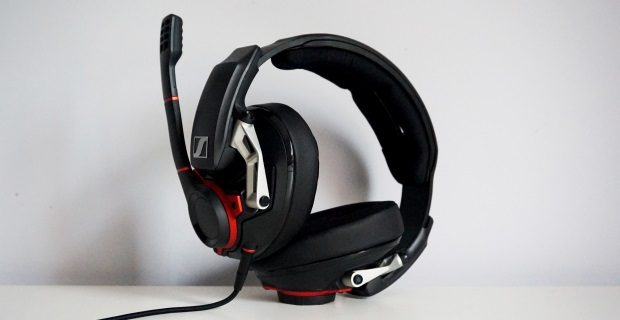 Design on point, then, but it’s notallideas: The build quality is also pretty damn good. This is a primarily plastic headset, with a few metal components thrown in for good measure, but it’s heavy and substantial. It’ll take a knock. There are weak points— don’t tell Sennheiser, but we managed to slightly dislodge the glued-on headband padding during a rigorous inspection—yet, if cared for, this is a headset that’ll last a long time. The cable, your braided choice of a four-pole 3.5mm jack or dual three-pole jacks, is replaceable, as are the earpads, and—oddly—the cover plates above each ear too.

This would normally be the point at which we switch it up and start spouting off about the bad stuff, but Sennheiser has denied us that small pleasure. Listening to the GSP 600 is a remarkable experience, with a unique soundstage that’s all balls, action, and life. We’d normally quibble with mixes that give you more than the original sound engineer intended—and, let’s be clear, the GSP 600 is far from flat or reference quality—but there’s a wow factor here that can’t be denied.

The trebles have bite, skipping over everything else, and never struggling to make their presence felt. The middle is pushy, pumping, and clear. Remember that, because the low end inside these closed backs is absolutely enormous, easily reaching so far into sub bass that we’re almost positive that our brains vibrated along with them. We don’t know quite how Sennheiser has engineered a mix with, simultaneously, so much clarity and so much ludicrous bounce, but we suspect it requires at least a masters degree in the dark audio arts.

Even with the chaos inside, the closed back completely blocked out even the twig- snap barrage of the Razer Green switches we typed this review on, and—we’re told— blocked leakage the other way, too. The noise canceling microphone is similarly brilliant. It’s clear, it’s warm, far less scooped-out and hollow than many headset mics, with automatic muting if you swing up the adjustable arm. Perfectly adequate for online conversation and, at a push, it might even be good enough for an acceptable recording, though a proper active mic will, of course, offer more flexible results.

So, you should definitely buy this, right? Well, no. Not definitely. The audio mix is going to be polarizing; the fact that we’ve

fallen on the positive side of the fence in this case doesn’t mean you’ll do the same. There’s a good possibility that, even if you’ve adjusted the pressure, you won’t find the ever-cranking fit of the GSP 600 comfortable for long-term use. Even if it does sit right, you’ll 100 percent end up with hot ears. Plus, as good as the whole package is, it’s a wedge more expensive than many of its rivals, including the faithful HyperX Cloud II—a set that can be had for less than half the price. We’d empty our wallets for the GSP 600, but we won’t force you to do the same, -alex cox