THERE ARE A FEW THINGS every hardware enthusiast needs from a headset, and top of the list is comfort. Rarely do we wear a headset for just a few minutes; if you’re going in, you’re going in. And so we went in. We anti-socially bolted on Sennheiser’s sexy-looking middle-ground cans, and steadfastly refused to remove them, testing them for six-to-eight hour stretches, alternating between marathon Over watch sessions, pumping music, and generally blocking out the rest of the office. And on this count, there’s rarely been a headset so well designed. The GSP 300’s memory-foam ear cups, coated in silky faux-leather, positively caress the skull, combining with the closed-back design—hinged on to ball joints, which place the cups squarely on even the most angular head—to effectively block out external sound. You’re not entirely in your own world, of course. Our colleagues, we assume from their wild gesturing, experienced mild second-hand discomfort when we truly blared the thrash metal, but there’s no more leakage than most other closed-back headsets we’ve tried. 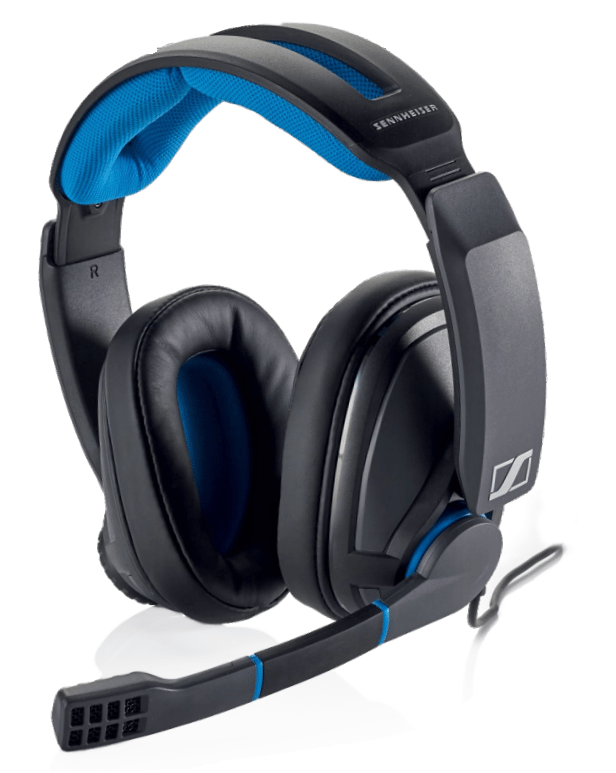 They’re also light, to the extent that we legitimately thought Sennheiser had accidentally sent us an empty box when they hit the office, though we have absolutely no concerns about their durability. They’re also easily adjusted, with a split headband padded with semi-rigid foam, which keeps the plastic away from the scalp, and puts another check in the wearability box. The clever design doesn’t stop there; swing the mic to vertical, and it shuts off, shielding the online world from your disgusting eating sounds, and there’s a useful analog volume knob on the right ear cup, adjusted so that it doesn’t quite hit zero. You can essentially use it as a booster, turning it all the way down, pumping your computer volume up to a reasonable level, and tweaking upward (slightly—a minuscule 19 ohm impedance means the GSP 300 can reach an eardrum-rattling 113dB) if you need to hear a particularly quiet buddy.

LIVE ON STAGE On the subject of volume, let’s talk sound stage, and tastes thereof. Sennheiser has crafted an interesting one; a rich, bass-heavy, bouncy sound, which is incredibly appealing on first listen, and at high volumes. Almost everything, not just the bass, feels marginally boosted, leaving no sound to the imagination, although the GSP 300s seem to miss a little in the vocal frequencies. It’s a massive sound, almost overwhelming—the cans can certainly hold their own at workplace-unsafe volumes, and retain impressive clarity when driven less aggressively—but we felt ourselves yearning for something a little flatter. But that’s us. If you like your ears full of fat noise at all times, these will please you no end. But what of the ears of others? The two-sided noise-canceling mic is not, by any means, awful; we had no problems being heard in Discord conversations, and the integrated cut-off comes in useful more often than you’d imagine. It’s adequate for streaming or recording, but we’d lean toward a dedicated external mic if we were going for a professional finish.

In isolation, this is a quality headset, a notable notch above budget options.

But, to be fair, we also spent a day flitting between the GSP 300 and Kingston’s similarly-priced HyperX Cloud II, which, until now, had been our favorite affordable headset. And, by a very small margin, it still is. The Cloud has a more appealing audio balance, a braided cable, as opposed to Sennheiser’s rubberized number, and an included USB sound module for fine adjustments; the GSP 300 feels slightly better on the head, and that rich bass is just explosive. Whichever way you lean, make no mistake about it, the GSP 300 is a formidable headset, and if you’re contained within cans on a daily basis, it’s one that has to be worn to be believed.