Samsung U28D590 – Samsung generally comes up with some pretty decent everyday monitors, but it’s the more elaborate and higher-tech models that get the most attention. As you can imagine, then, a 4K monitor from Samsung is certainly cause for excitement, but can it live up to its expectations?

The Samsung U28D590 is classed as a gaming monitor, with a 28″ TN panel and a 1 ms response time. The maximum resolution is, as usual, 3840 x 2160, and there’s the standard typical 1000:1 contrast ratio. Interestingly, the dynamic contrast ratio is a little difficult to mention. Every time we tried to get an actual number, we were presented with a dynamic contrast ratio of mega’, whatever that means. Needless to say, we imagine it’s quite a lot. 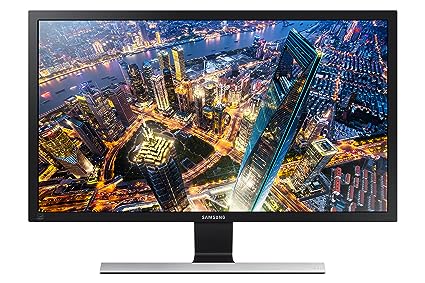 We were quite surprised by the lack of connectivity from this Samsung model. There are just a pair of HDMI ports and a DisplayPort, with an audio output port located in between. Again, as with the Dell unit, the HDMI ports are version 1.4, so the only 60Hz 4K images you’ll see are all going to via the DisplayPort, and you’ll also lose the ability to connect a VGA or DVI cable without some sort of conversion. There’s also no built-in USB hub or speakers either.

Build quality isn’t all that great, which again we were quite surprised by, considering Samsung is usually quite stringent when it comes to design and manufacturing. We didn’t much like the glossy plastics on the bezel, which felt a little too cheap for a monitor of this price. It also offers a limited range of movement, namely the tilt, which was extremely stiff and decidedly poor in comparison to the other monitors here. One more design oddity: around the back of one corner is a small joystick, a bit like the sort you’d find on a game controller, which used to navigate the OSD. While it seems like a good idea, it’s actually quite a nuisance and feels horribly cheap and on the verge of breaking.

The image and picture quality, though, are very good but not quite on a par with the Philips or AOC monitors. The colours are bright and vibrant, and the image sharp and perfectly clear, but it lacks the depth that the other 4K monitors have. Thankfully, though, we didn’t see any of the lag we experienced with the Dell 4K monitor, which we were half expecting, given that the Samsung is roughly the same age and has the same HDMI port version.

The Samsung U28D590 has a good 4K screen to boost its score, but the let-down elements are the poor quality design, as well as a lack of connectivity and extras such as USB and speakers. For gaming, which it’s designed for, the Samsung does a reasonable job, but so do the other monitors on test (except for the Dell).

We can confidently state that your money is better spent on the AOC 4K monitor.