Samsung’s Galaxy Book is affordable, compact and refined – at this price, it’s the Windows hybrid to beat

JOINING THE LENOVO Miix 510 in an attempt on the Surface Pro’s supremacy is the Samsung Galaxy Book. Like its spiritual predecessor, the Galaxy TabPro S, it’s a Windows-powered 2-in-1, and this time comes in both 10.6in and 12in varieties. We reviewed the smaller model. 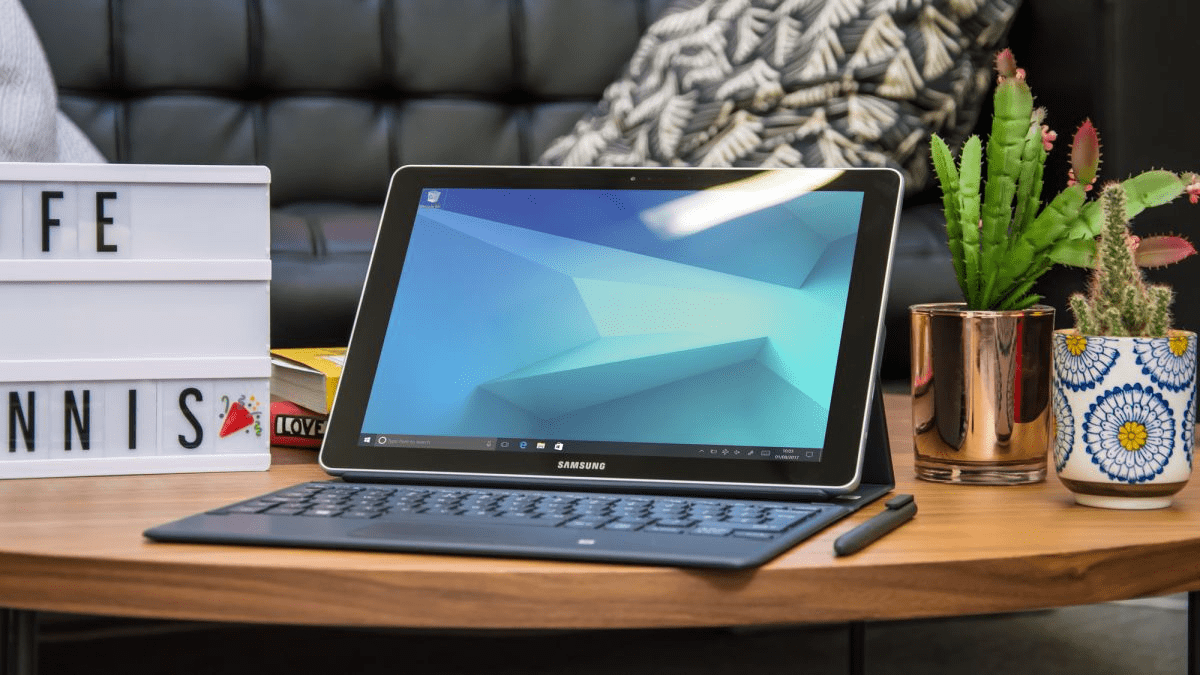 If you’ve seen the TabPro S, the Galaxy Book will look very familiar; put the two side by side and you’d struggle to tell them apart, aside from the Galaxy Book’s more powerful hardware making it a little chunkier. It’s 8.9mm thick, which is noticeably fatter than Apple’s 10.5in iPad Pro and a hair thicker than the 2017 Surface Pro.

Its bland plastic shell isn’t what we’ve come to expect of Samsung of late, though. The faux gun-metal trim might give off the illusion of aluminium from a distance, but don’t let that fool you: this feels more like a mid-range tablet than a premium 2-in-1.

As for connectivity, there’s a solitary USB-C port on the right-hand edge, nestled between the 3.5mm headphone jack and microSD card slot. Sitting at the top left is the Book’s power button and volume rocker, while the bottom is

The Galaxy Book’s keyboard is its stand-out feature. It clips on securely, and folds up to form a triangular stand

reserved for the set of magnetic contacts for connecting the folio-style keyboard. 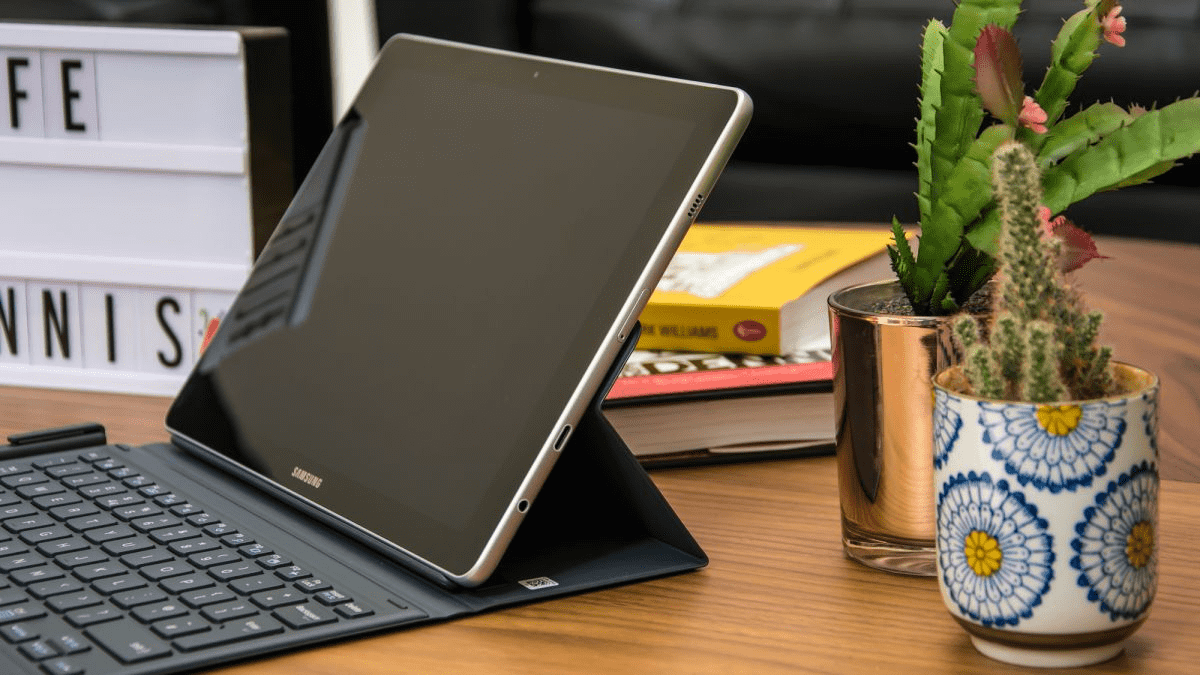 The Galaxy Book’s keyboard is its stand-out feature, and it’s included in the box. It clips on securely, and folds up to form a triangular stand at the back, in a similar way to Apple’s Smart covers. It can only be rested in two positions, so it isn’t always possible to position the display at the most comfortable angle.

Nonetheless, actually typing on the Galaxy Book’s keyboard is far more comfortable than on any other recent hybrid. Its keys are a joy to type on, with plenty of movement to each keystroke, and a satisfyingly clicky feel. This is as good as clip-on keyboards get. 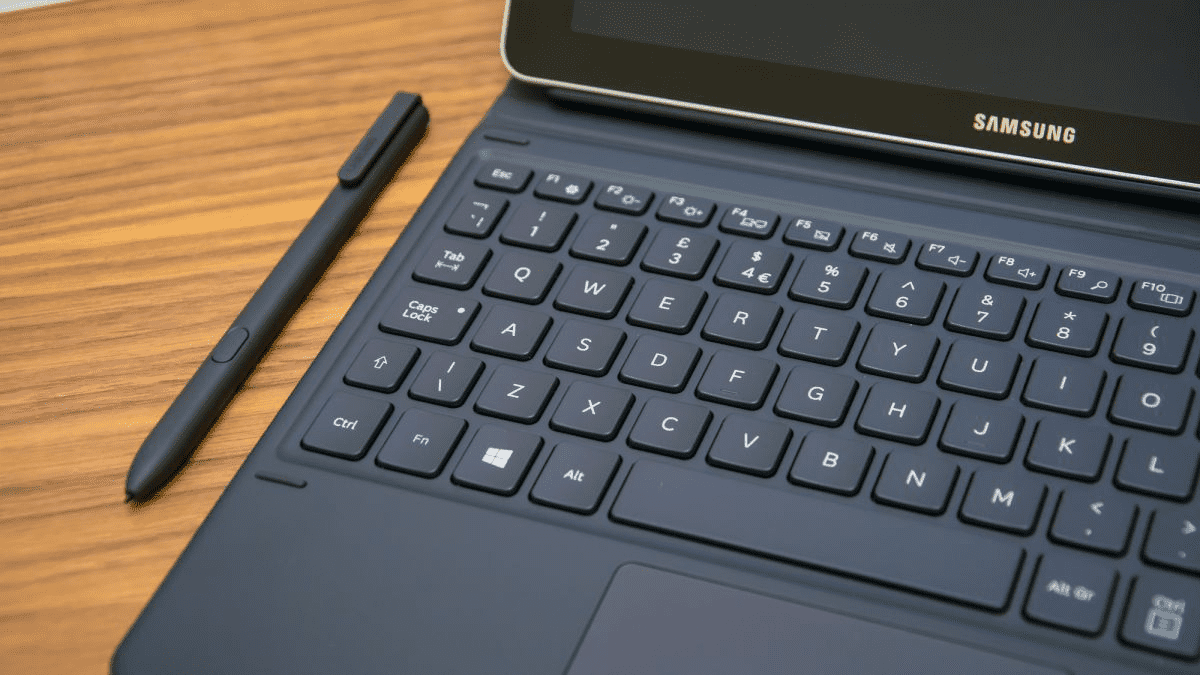 Our only complaint is that the keys are fairly small, causing us to sometimes hit two keys at a time. This is a minor issue in practice, and it’s a downside shared by pretty much every other 10in tablet on the market.

The tiny touchpad is excellent. It’s nice and smooth to run your fingers across, and works perfectly in tandem with Windows 10’s multitouch gestures. In fact, despite its limited real estate, it works pretty much perfectly.

The Galaxy Book also comes with Samsung’s S-Pen stylus. It’s nice and light in the hand, and this makes it easier to make the most of the 2,048 levels of pressure sensitivity than previous Samsung styluses. What’s more, it doesn’t need a battery, cleverly drawing wireless power from the tablet instead.

The display on this 10.6in Galaxy Book is a solid all-rounder. Color reproduction is top notch, with bright whites and generously deep blacks. Maximum brightness reaches a respectable 387cd/m2, and a contrast ratio of 928:1 is on the money, too. Color accuracy is excellent, meanwhile, with an average delta-E of 1.64 proving that Samsung’s panel is capable of reproducing colors accurately. 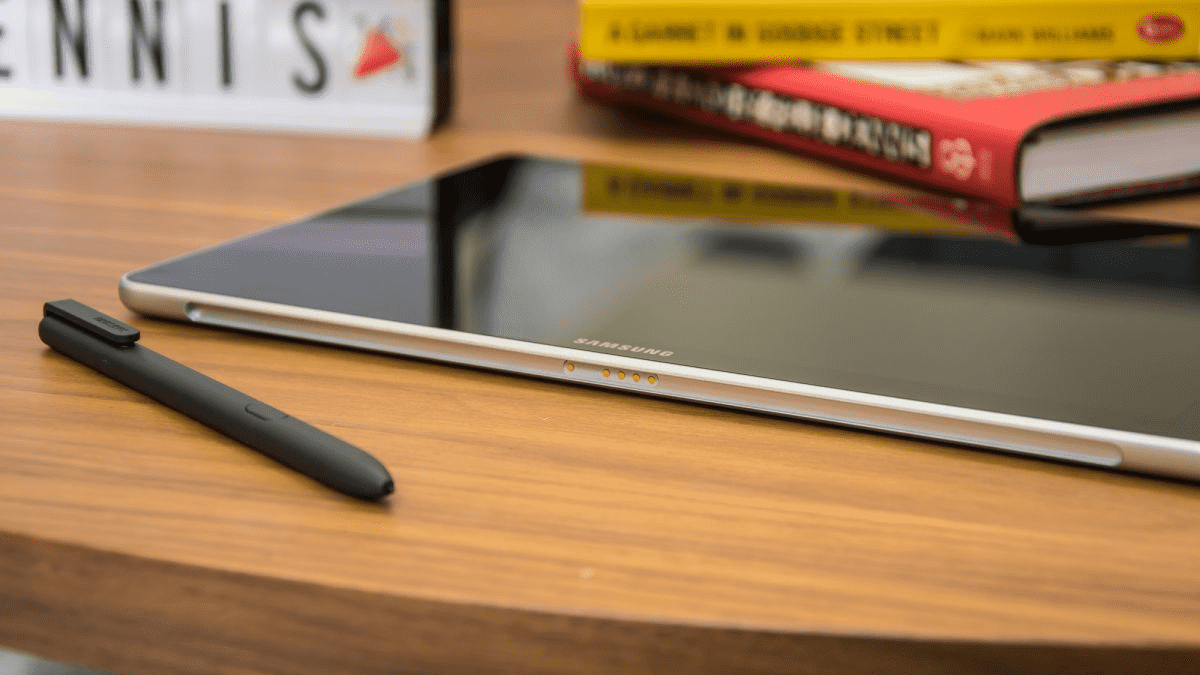 Both the 10.6in and 12in Galaxy Book share a display resolution of 1,920×1,280, which makes for a pleasingly crisp display, but there’s one crucial difference. While the Book 10 uses a standard LCD panel, the Book 12 features a Super AMOLED display that also supports HDR, which promises a dramatic bump up in image quality. It’s a shame this wasn’t adapted for the smaller model as well.

The 10.6in model acquits itself well in use, though. Windows 10 feels super-smooth, with no hint of lag in touchpad or touchscreen gestures, or day-to-day internet browsing. 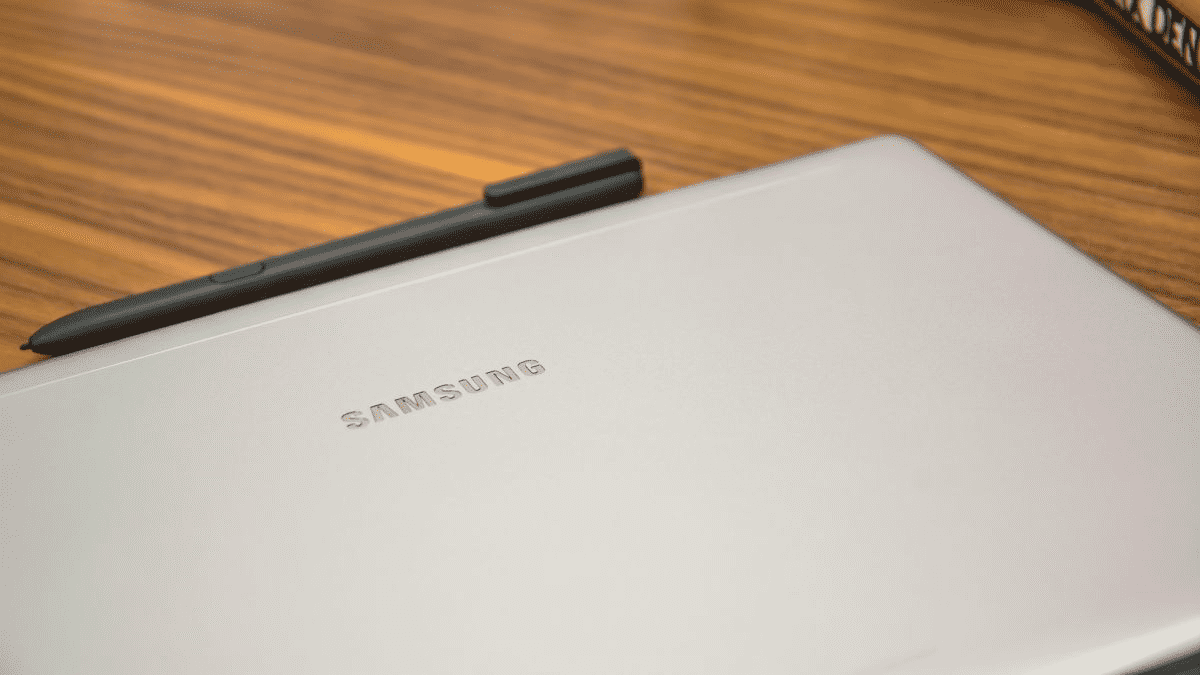 Battery life isn’t a high point. A result of 7h 18m in our video playback test suggests that the Galaxy Book should have enough reserves to get you through a full working day, at least under light use, but it’s behind its key competitors. The 10.5in iPad Pro, for instance, lasted 12h 59m in the same test.

Samsung may not have delivered a knockout blow against the Surface family, but the 10.6in Galaxy Book does land a few hits. It’s not the most luxurious-feeling device, but this hybrid provides a keen balance of price, performance and usability – and the excellent keyboard and stylus are included.

Samsung’s Galaxy Book is affordable, compact and refined - at this price, it’s the Windows hybrid to beat