Just like its 13-inch sibling, the 15.6-inch Lenovo Yoga 720 is a solid contribution to the 2-in-1 laptop space. It feels every bit as comfortable as a tablet as it does as a laptop, only this time it’s a bit heavier than the 13-incher, weighing 2kg instead of a measly 1.3kg. Oh, and its complement of ports is marginally different. 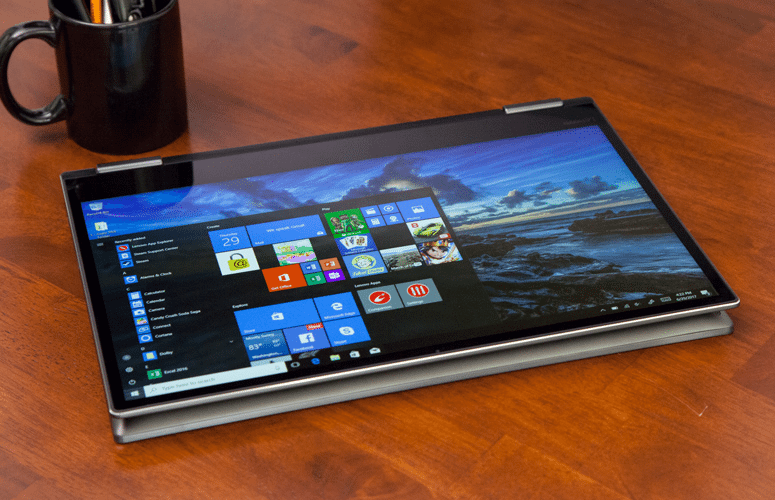 Rather than two USB-C ports and one USB 3.0, the 15-inch Lenovo Yoga 720 packs a pair of legacy USB Type-A ports and a single USB-C connection. And, of course, the proprietary single-pin Lenovo connector is still being used for charging, a qualm we’ll address in more detail below.

The specs on the 15-inch Lenovo Yoga 720 creep eerily close to that of its smaller counterpart. Luckily, we were given the chance to review one of the configurations sporting an Nvidia GeForce GTX 1050 for added graphics prowess, bringing the Lenovo Yoga 720 up to snuff with competitors, such as the Samsung Notebook 9 Pro and the HP Spectre x360 15.

For the most part, the Lenovo Yoga 720 is built like a dream. Everything about it screams comfort, from its aluminium finish to the six-row backlit keyboard. The key travel feels a lot better than the butterfly mechanism found in Apple’s MacBook Pro, plus every key is rounded off at the bottom for improved ergonomics. 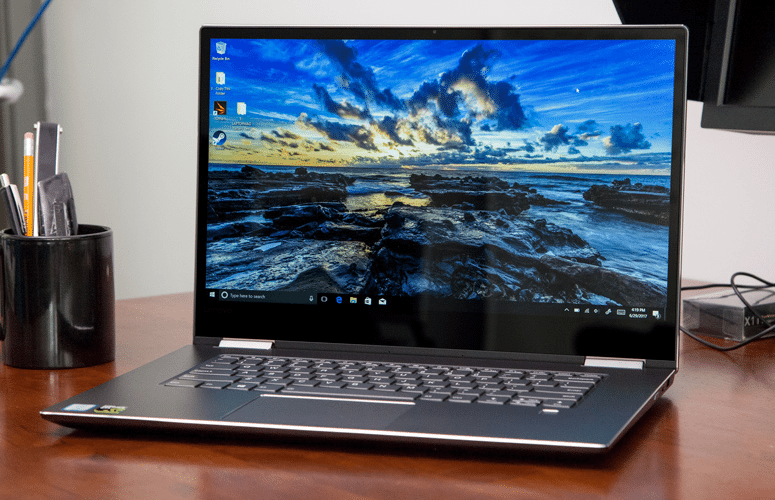 Although the trackpad isn’t as satisfying or as precise as Apple’s Force Touch trackpads, it’s still one of the better ones we’ve used on a Windows laptop. Better yet, the silvery border which surrounds its clicker only adds to the prestige of the Lenovo Yoga 720.

Airflow is handled simply and smartly on the Lenovo Yoga 720, with a single vent pointing from the rear of the machine. So while it’s not completely silent, the fans are positioned in such a way that they’re never distracting.

It’s surprising Lenovo was able to pull this off given the use of Intel’s standard voltage, quad-core ‘H’ series Core i7-7700HQ processor, the first of its kind to be featured in a 2-in-1. You would think that paired with a GTX 1050, the Lenovo Yoga 720 would get loud, especially during heavy gaming sessions, but it typically does not. 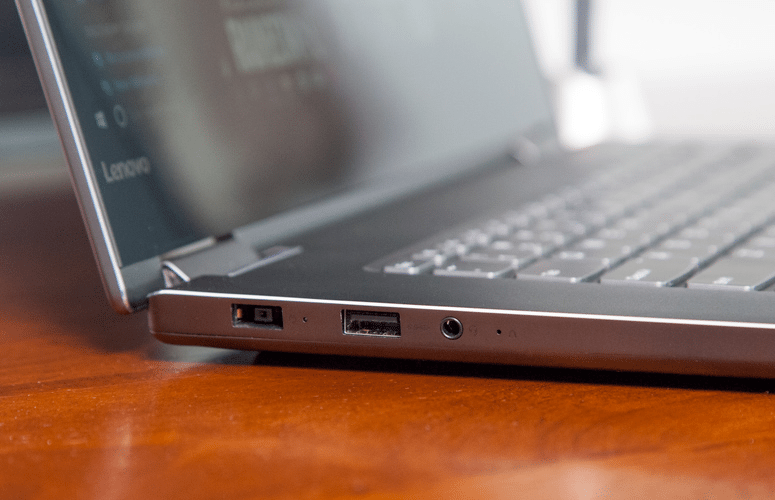 Despite its power, the 15-inch Lenovo Yoga 720 still bears a relatively compact frame, making it the ideal candidate for kicking back and watching a movie or three in bed. While the 1080p Full HD model won’t look as good, there is the option of a 4K Ultra HD screen.

The Full HD version is fine on its own, but we’re far too adjusted to the crystal clear quality of QHD and UHD screens at this point not to complain about the washed-out appearance of a standard 1,920 x 1,080 IPS display – especially seeing as there aren’t any spicy brightness enhancements to make it competitive with the Samsung Notebook 9 Pro. 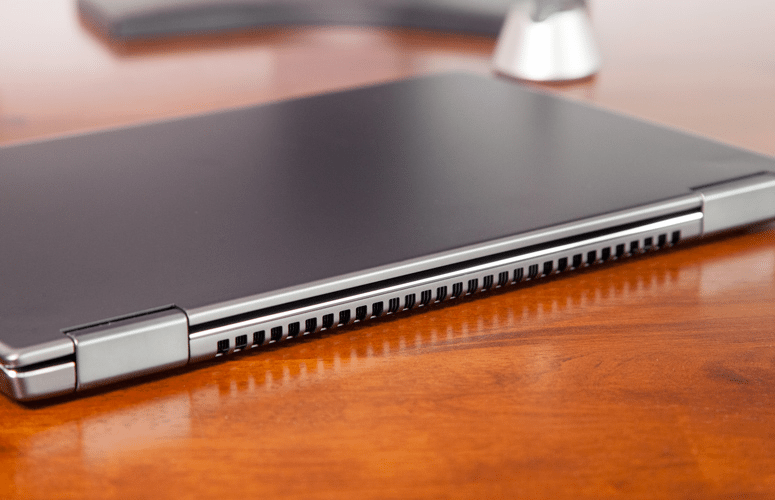 Speaking of watching movies, don’t plan on doing so without a decent set of headphones, as the speakers here are down-firing, thereby muffling the sound in practically every position. Given the lack of ports, they could have easily been integrated on the sides or above the keyboard, but instead we’ve been disappointed once again by tinny sound on a laptop.

Then there are the ports which, as was the case with the 13-inch Lenovo Yoga 720, are notably disappointing. Limited to just two USB ports, a single USB-C port, a headphone jack and a single-pin proprietary Lenovo charging deck, you’ll need to purchase an adaptor or two if you want to use an HDMI monitor or an SD card reader. 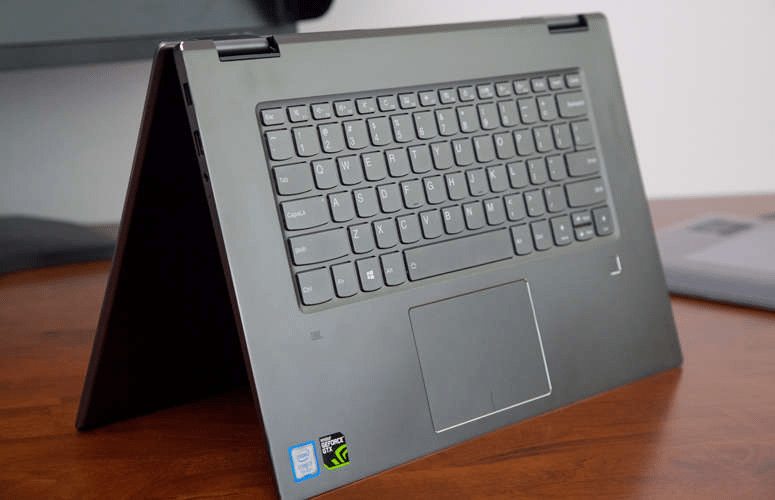 At the very least, Lenovo should have gone the way of the HP Spectre x360 or the Huawei MateBook X and included the necessary cables for these elemental functions, but alas that’s not the case. Instead, the company is still relying on its own charging connector and appointing USB-C to a good chunk of the accessory duties. Next time, we hope to see USB charging from Lenovo, preferably without any clunky power bricks involved.

Performance-wise, the Lenovo Yoga 720 demolishes everything in its path. Because it uses an H series processor instead of the usual U series, the HP Spectre x360 15 and Samsung Notebook 9 Pro didn’t stand a chance in our benchmarks. Even with half the RAM, the Lenovo Yoga 720 model we were sent experienced better results than the HP Spectre x360 in every test. And, with the exception of the Geekbench 4 single-core, PCMark 8 Home and our movie tests, it significantly outperformed the Samsung Notebook 9 Pro as well. 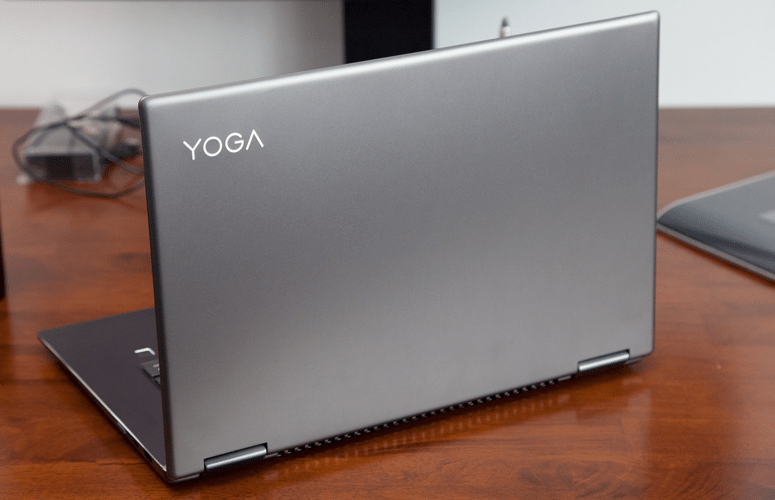 This system won’t be able to run, say, NieR:Automata at a stable 1080p and 60fps with the graphics settings cranked all the way up, nor is it intended to. But, with its specs, you can expect to run modern triple-A games at medium settings and at a standard HD (1,366 x 768) resolution. We did, however, spend some time taking BioShock Remastered for a test drive on the Lenovo Yoga 720; a game that runs flawlessly with all the graphics

“Even without a full array of ports, you can get everything done that you need with this hybrid”

settings (including the resolution) cranked up. So, if you plan on using the Lenovo Yoga 720 for light – or legacy – gaming, it’s a surprisingly worthy candidate.

Despite coming out short in our movie test, wherein the film Guardians Of the Galaxy is looped until the computer dies, compared to the Samsung Notebook 9 Pro, the Lenovo Yoga 720 has a strong battery life as well.

At seven hours and seven minutes, it clearly bested the HP Spectre x360 15 (five hours and 31 minutes), even with its higher voltage requirements. And, although it didn’t touch the eight hours and 23 minutes achieved by the Samsung Notebook 9 Pro, it wasn’t too far from the ‘up to nine hours’ promised by Lenovo.

You may think 15 inches is too big for a hybrid, but the Lenovo Yoga 720 could be the laptop to convince you otherwise. Neither too heavy or too big, this laptop is well-rounded, notwithstanding a few minor gripes. If your aim is to get the most power from your 2-in-1 without compromising battery life, the Lenovo Yoga 720 is a good bet.

Even without a full array of ports, you can get everything done that you need to with this hybrid. It’s not particularly the ‘best’ at any one specific task, but rather the Lenovo Yoga 720 is a multi-faceted powerhouse, and one that flips 360 degrees whenever you need it to.

The Lenovo Yoga 720 is fantastic value, with a killer combination of raw power and good battery life.

The Lenovo Yoga 720 is fantastic value, with a killer combination of raw power and good battery life.