A smitten David Price reckons this Class D integrated with DAC and network streaming is a thoroughly modern music maker. Read our Primare I15 Prisma Review. 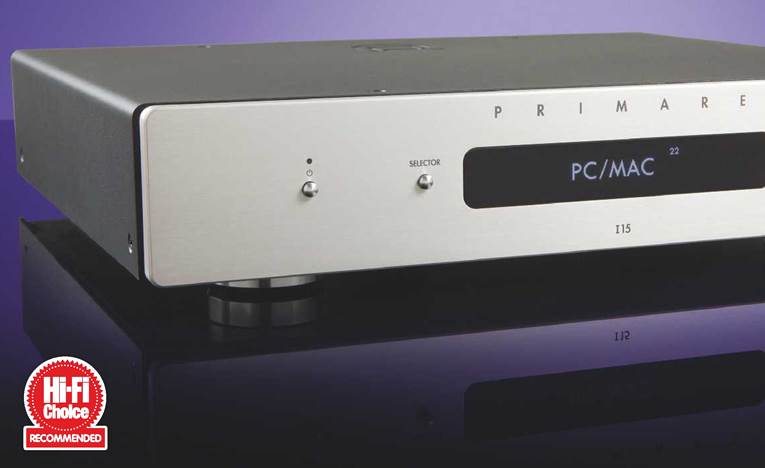 Warp back 10 years and almost every integrated amplifier you could buy was essentially an analogue preamp in the same box as a Class AB power amplifier stage, with a power supply to make them both work. Their greatest concession to modernity was a remote control, and if you were really lucky it would let you toggle between and adjust the volume. Now, the landscape has changed dramatically, and it’s products like this that show the way.

This is a small-footprint integrated amplifier with built-in DAC and Class D output stage. The latter, by the way, means it’s able to pack more power into a small case because heat dissipation is much less of an issue. Just a couple of years ago, this alone was pretty avant-garde stuff but the Primare packs its own Prisma platform inside, which moves things along still further. Primare’s Terry Medalen (see Q&A) describes it thus: “A bundle of the most commonly used connectivity platforms – Bluetooth, AirPlay, Spotify Connect and Chromecast built in – so that anyone in the household can comfortably use the system, including casual listeners”. In effect, it’s far more connected to the outside world than most, and it’s all easily app controllable.

If you’re a gentleman of a certain age like me, think of this Primare as the 21st-century equivalent of one of those massive seventies receivers with a welter of inputs and outputs, vast amounts of knobs and controls. The difference is that it is small, sleek and elegant – and therein lies the magic. It’s brilliantly packaged, and able to talk to practically any digital source from network-attached storage to Chromecast (now with Roon), offering up to 24-bit/96kHz connection to the music streaming service of your choosing.

Since the company’s inception in the early eighties, Primare has made clean-looking modernist hi-fi products, subtly reminiscent of what Dieter Rams was doing at Braun or Jacob Jensen at Bang & Olufsen.

This Sweden-based company’s founder was Danish designer and audiophile Bo Christensen, and he’s never forgotten the importance of clean layout. The I15 Prisma is the smallest in the new range, effectively a more affordable I35 Prisma integrated that has shrunk in the wash, so to speak.

Inside its neat three-quarter-sized case is a Class D power amplifier section using the very well regarded Hypex modules. It puts out a claimed 2x 60W into 8ohm, aided and abetted by a custom-designed heavy-duty switch mode power supply. The respected AKM AK4490EQ DAC chip supports up to 384kHz PCM and DSD128 via its USB-B port, plus the usual WAV AIFF, FLAC, ALAC, MP3, MP4 (AAC), WMA and OGG files. Relay switching is used in the preamp section, with short signal paths and two and four-layer double-sided circuit board construction.

In use, the I15 Prisma is a joy. The sharp OLED display is informative, looks good and allows adjustment of balance, maximum volume, mute volume, start-up volume, etc. It can be configured to display all inputs or only those with signal going in, and you can change their names. Input gain can be individually adjusted, and there’s a front panel lock facility. The rear panel sports sockets for the two screw-in antennae, and two Ethernet sockets so it can work as a network switch. The fascia switchgear is nice to use, and the amp is offered in a choice of black or titanium finishes.

The Prisma control app – available for iOS or Android – is a joy to use and lets you get your music from Bluetooth, AirPlay, streaming services such as Spotify Connect or your NAS drive. Even the bundled remote control is a quality item. An R15 MM/ MC phono stage is coming soon, we’re told, and it will also do an analogue-only version of the I15 with optional MM phono board, that can be paired with the matching CD15 Prisma CD and network player to create a compact, powerful, and refined digital and analogue system.

Think of Primare’s new I15 Prisma as the mouse that roared. It’s a pretty small thing by conventional separates hi-fi standards, yet despite this manages to punch out a powerful and engaging sound. While not quite the equal of the best purpose-designed integrateds at its price, it sounds way better than it has a right to, given its size and enormous flexibility. Best of all, it sounds ‘right’, with nothing obviously wrong or unpleasant.

To get an idea of what it’s capable of, I first play The Prodigy’s Invaders Must Die via one of the digital inputs.

If you know this track, you’ll know it has most amplifiers gasping for oxygen just seconds in. It’s massively compressed, and loaded with thick, fat slabs of synthesiser work – much of it in the bass. It’s one massive adrenaline rush from start to finish, so I don’t have great expectations of the pretty little Primare. I am wrong – it packs a serious punch considering its size and price. We’re not into super amp territory, but it goes louder than I

A smooth, accurate listen rather than a seat-of-the-pants adrenaline rush expect and does so with grace. There is a little hardening of the sound at really high levels, but there’s a general sense of control and poise that’s not entirely expected.

At the same time, I am surprised by the tonality, which is smooth and even. There’s little sense of any brittleness across the midband, and no nasties in the treble. Bass is dry and well formed, but not exactly sumptuous. The result is a balanced sound that one might call clean, if the term hadn’t been so abused before.

Annie Lennox’s electrifying cover of Neil Young’s Don’t Let it Bring You Down is a typical nineties production –    very polished, but rather electronic for some tastes. The Primare renders it really well, with lots of detail and a mesmerising grip to her vocals. As we all know, that’s quite a hard, brittle voice she has there, with a steely tonality to it – brilliant as it is. Yet the I15 Prisma delivers it in a smooth and crisp way right between the speakers, refusing to let it grate. 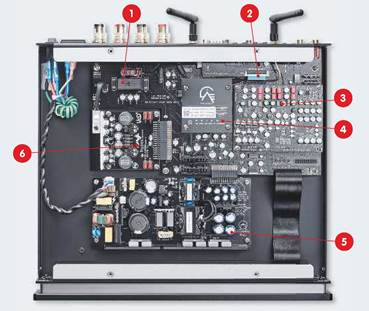 Saxon’s 747 (Strangers In The Night) is an epic late-seventies heavy metal roof raiser, with cranked-up guitars resounding around a vast soundstage. This little integrated proves quite adept at signposting the extremes of the soundstage, giving a widescreen presentation that’s confident with big, broad brushstrokes of sound calmly delivered, letting the listener really get into the music. In absolute terms, stage depth is a bit curtailed, but I can’t help but be impressed by the

The Primare goes louder than I expect and does so with considerable grace large sound that’s coming out of such a small box.

Rhythmically the I15 Prisma is quite matter of fact – it’s not the most romantic-sounding amplifier and doesn’t whisk you off to a work of exotic, supple rhythms that make music like you’ve never heard before. Instead it’s a grafter – it gets the job done and does the least possible to get in the way.

I like the precise, ordered musical flow of Uncle Bob’s Burly House via my Western Digital NAS drive. This amplifier resolves the leading edges of notes and beats of this shuffling nineties trance classic well. Although it gives a pacy and engaging sound, it still lacks that last degree of dynamic articulation that really makes music

come alive and I think of the Primare as a smooth and accurate listening partner, rather than a seat-of-the- pants adrenaline rush. Indeed, the same can be said across all inputs – aside from the analogue one, which sounds ever so slightly less convincing – and the Bluetooth connectivity is better than expected.

Despite its copious amounts of facilities, you shouldn’t think of this amplifier as a lightweight in the sonic stakes. Yes, it has a dry and accurate presentation, rather than embellishing the music, but it’s always fun and is backed up by plenty of power, too. Smooth, couth and sophisticated, Primare’s new I15 Prisma shows that in today’s hi-fi world, you can have convenience, style and musical satisfaction in one box, at a very reasonable price

Exposure’s 3010S2-D integrated amplifier (HFC 397) is the class of the field in sonic terms at this price point, but gives a very different user experience. It’s a far less sophisticated design that lacks network streaming, yet the emphasis is on good old-fashioned Class AB sound quality and power. Here it excels, with a bigger, more three-dimensional soundstage, better detailing and greater vibrancy and life to the music. That’s not to say the Primare I15 Prisma isn’t fun to listen to; it’s a smoother design that still makes an enjoyable sound, in spite of its slight lack of punch.

DP: What type of customer is the i15 Prisma aimed at?

TM: The 15 Prisma series was designed to be reasonably priced and as compact as possible, while maintaining Primare’s tradition of high performance. It became increasingly apparent that there was a growing demand for smaller electronics that could more easily integrate into living environments than our already compact products. As part of that slimming down effort we even eliminated our signature control knob for a simpler and quieter looking front facade, making the amplifier less obtrusive.

How important would you say Prisma is to typical buyers?

Very important, whether for the typical ‘lean-in listener’ (those interested in the gear as much as the music) or the ‘laid-back listener’ (those with a keen interest in music that appreciate easy access to high performance playback). For the lean-in listener, Prisma provides sophisticated network control for the largest and highest resolution digital music file libraries. For the lean-back listener, it’s very easy to use.

Why use bought-in Hypex power modules, instead of Primare’s own Class D technology?

Not only is our new UFPD 2 module too expensive to produce and include in a product as attractively priced as the I15 Prisma, but it is also too big to fit within the chassis. We were fortunate to find the Hypex module as it provides the performance we require when fed by our power supply and input circuitry, while being compact enough to fit easily within the compact chassis. Its small size allows us to align the basic circuit elements so that they work most sympathetically together, as we do with all of our designs. The major difference between the two is that UFPD 2 offers more advanced output filtering for more linear amplification across the entire audible bandwidth. The result is that the I15 Prisma sounds essentially like our more expensive amplifiers.