All right, yes, it’s a monitor that costs over a thousand pounds. Obviously you’re not going to buy one, and nor are we. But it’s always worth keeping an eye on what manufacturers are up to at the high end, because it’s what we’ll all be using a few years down the line. 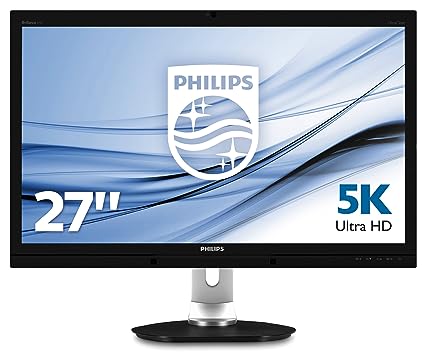 In this case we’re really looking forward to that, because this 5K monitor looks amazing. Even 4K resolution (3840×2160 pixels) is incredibly sharp. Philips, following the lead of Apple’s current iMacs, has packed 5120×2880 pixels into the 275P4VYKEB’s 27 inches. It effectively doesn’t have pixels at all, just a continuous image that looks as solid as real life.

Philips claims its monitor covers 100 per cent of the smaller sRGB range, which everyday software and content aims for, and 99 per cent of Adobe RGB range. In our our tests it came within a whisker of these figures, and accuracy within that range was excellent.

Creative professionals won’t care that it’s not the brightest screen in the world, but they may not like the glossy finish, which is prone to reflections.

More worryingly, we found the brightness varied noticeably across the screen. ‘Organic’ LED panels, where each pixel is individually lit, aren’t yet feasible at this scale, although they are common in mobile devices. Given that, achieving balanced backlighting is a challenge for every monitor, but we’d have hoped for no compromises at this price.

While HP’s comparable Z27q is just as expensive, Apple is promoting LG’s UltraFine 5K Display. At the time of writing, LG is working on a radio interference problem with this model, but it should get fixed. If you’re tempted by the Philips, you’ll also need an expensive PC capable of 5K output, which requires two separate DisplayPort cables. The rest of us might prefer to use those Display Ports to connect two cheaper monitors. You won’t get 5K, but you’ll get plenty more screen for your pound.

Uneven backlighting in our sample gave us concerns, but this is a stunning screen – if s just far too expensive for most of us

Uneven backlighting in our sample gave us concerns, but this is a stunning screen - if s just far too expensive for most of us

We haven’t tested it yet, but at Apple’s price this 5K screen could be better value – once its technical hitch is corrected