This is the second Netgear review in the group, and with a name like Nighthawk, you would expect something pretty dramatic from this impressive-looking router.

The Netgear Nighthawk is, apparently, fashioned after the Nighthawk stealth fighter, obviously representing speed and an array of abilities – and in many ways, it doesn’t disappoint in this respect.

The router’s dimensions are 285 x 184 x 50mm, and it comes with simultaneous dual-band 2.4GHz and 5GHz wi-fi supporting 802.11 a/b/ g/n/ac through three large, powerful antennas protruding from the back of the unit.

As you’d expect from something that’s modelled like a modern flying weapon, this is quite a dominating thing to have on show in your living room. The wedge-shaped, matte-black front, with sloped mesh sides, shows a row of LEDs indicating the states of the rear four gigabit Ethernet ports, gigabit WAN port, USB 2.0 port, internet and power. The front also hides a USB 3.0 port just below the row of LEDs, discreetly tucked away so as not to lessen the overall design but still keeping it functional. 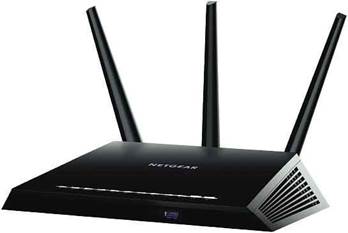 The Netgear Nighthawk is an imposing looking router 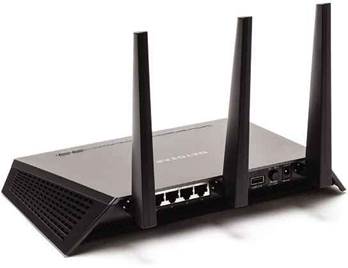 It’s also fast and has a fantastic range too

with a 1 GHz ARM Cortex-A9 dual-core processor and 256MB of memory. This processing power fires the Nighthawk along at a rate of knots and when combined with such features as prioritised traffic for gaming, video and media streaming, you can be certain that whatever you plug into it will function at its maximum potential.

Other features include implicit and explicit beam forming, reduced lag from slower wi-fi attached devices, secure cloud access setup for any USB storage devices you plug in to it and the usual Samba, FTP and VPN support.

The Nighthawk uses the upgraded Netgear Genie web administration software, which is, for the most part, easy to use and understand for beginners, while still being accessible for those who want to enter the advanced side of the setup. Although good, we did find it often took a good minute or so to activate a certain feature, such as the parental controls. However, it was nothing to get too distressed about.

What really matters is that the Nighthawk is the fastest router we have in the group, and also the best in terms of the distance of the signal. Not only did it penetrate the walls of every room in the house it was tested in, but we also picked up the signal right at the back of the garden some 30-odd metres away, which is pretty impressive.

One element we did find a little odd was the location of the USB 3.0 port. While the design is spectacular looking, it’s somewhat ruined by having a big ugly cable permanently dangling from the front of the unit to a USB drive. It’s not totally terrible but an odd decision from Netgear.

The Netgear Nighthawk R7000 is an exceptionally powerful router, with plenty of features and more than enough technology for the next generation of connected devices. But if you demand the best networking from your router, then this is the product for you.

NETGEAR Nighthawk Smart WiFi Router (R7000) - AC1900 Wireless Speed...
Accelerate your WiFi with net gear Nighthawk! Enjoy the fastest WiFi currently available, with speeds up to 1900 Mbps and a powerful dual Core 1GHz processor for extreme performance. High-powered amplifiers, external antennas and beamforming+ improve range and reliability for up to 100% more wireless coverage. Features like Dynamic QoS prioritize streaming and gaming, creating a blazing-fast, lag-free WiFi experience. R7000 provides an extensible design that enables service prioritization for data. Design that delivers high availability, scalability, and for maximum flexibility and price/performance. Make sure that the network settings of the computer are correct. Wired and wirelessly connected computers must use network (IP) addresses on the same network as the router. The simplest way to do this is to configure each computer to obtain an IP address automatically using DHCP
$62.00 $189.99 33 used from $59.99 13 new from $139.00
in stock