NAIM UNITI ATOM Review – Naim Audio might not be the first company you think of for enhancing the sound of your TV, but its Atom one-box system gives Ed Selley plenty to applaud

ONE OF THE big growth areas in stereo audio over the last few years has been in all-in-one systems. These single-chassis units offer a variety of inputs and features, plus onboard amplification to which you simply bolt the speakers of your choice. Naim was an early competitor in the category – its original Uniti arriving nearly a decade ago and eventually becoming an entire range. 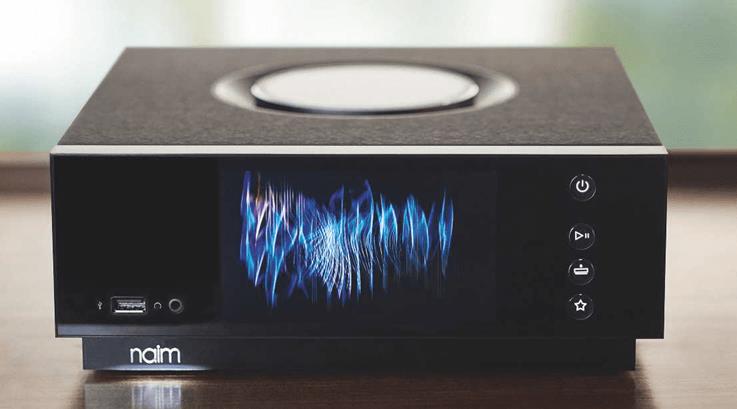 Tested here is the first of an all-new second generation of Uniti models that intends to build on the strengths of its predecessors. The Atom, as the name implies, is the smallest of three systems, but its specification is hardly diminutive.

As well as onboard streaming with internet radio, Tidal and Spotify integration (through dual-band Wi-Fi or Ethernet), you get AirPlay, aptX Bluetooth, Chromecast built-in, three digital inputs – two (24-bit/96kHz) optical, one (24-bit/192kHz) coaxial – and a phono analogue stereo connection.

These are supported by a pre-out connection and two USB-A inputs that can read content and, if you wish, serve it to other devices on your network. There’s also a 3.5mm headphone socket.

Power comes from a class A/B amplifier rated at 40W-per-channel, adapted from Naim’s entry-level (although at over a grand, the term is relative) integrated amp, the NAIT 5si. Now, 40W doesn’t sound hugely powerful but historically Naim equipment hasn’t struggled with demanding loads and the Atom has been perfectly happy driving a hefty pair of PMC twenty5.24 floorstanders during my audition. Note that Naim’s speaker terminals require the use of loudspeaker cable with 4mm plugs.

Under the hood, Burr-Brown DACs and a 40-bit SHARC DSP join forces with proprietary Naim software to promise a premium audio performance.

The Atom is clearly a hi-fi product, from a brand well- known in audiophile circles. The reason that it is of interest to HCC comes in the form of an optional connection.

For an extra, Naim can fit its one-box with a single HDMI input that allows it to receive the ARC signal from your TV. There’s no surround processing here, of course, so the signal needs to be stereo, but it still puts it in a unique position among systems of this nature, and gives it the potential to be a genuine central hub for all your home entertainment needs. If you’re not interested in surround sound, that is.

No less relevant to attracting a wider audience is the Atom’s design aesthetic. Forget what you know about traditional British hi-fi and revel in a truly stunning piece of industrial styling. With its large, bright full-colour LCD display on the front fascia, and wonderfully tactile illuminated volume control on the top panel, this manages to look and feel special. Even the side-mounted heat sinks have eye-catching charm. It would be foolish to call the ,900 Atom ‘affordable’ but you can see where much of your money goes.

For operation you will probably find yourself using the excellent Android and iOS control app, as this is a conduit to your music libraries, but the bespoke remote handset is a fine alternative.

Hooked up to my Panasonic plasma’s ARC-enabled HDMI connection, the Atom has no trouble handling the audio signal from a Cambridge Audio 752BD, Sky+HD box and the TV’s in-built Netflix client.

Watching Moana, the most notable element of the Naim’s performance is that after no more than a few minutes, the lack of surround effects ceases to matter much. In the climactic attempts to restore the Heart of Tahiti, this little hub and my connected PMC speakers create a soundstage that is entirely free from any gap in the middle, and unearth an impressive amount of detail within the soundtrack at the same time. It’s a tactile presentation, with delicate imaging.

Also impressive is the tonality. When Moana begins to warble, the way that the Atom handles Auli’i Cravalho’s vocals is absolutely outstanding; rich and life-like.

Where this processor/amp really excels is making everything sound like it should. With a giant lava monster that’s a fairly abstract concept, but with the snarling engines of The Fate of the Furious it massively helps the suspension of disbelief.

This material does show up that, even via the sizeable PMC speakers, the Atom is not the most seismic performer.

Compared to a more powerful (and rather more expensive) Naim Supernait2, it doesn’t hit as hard, and this is more noticeable when you substitute a pair of rather more affordable speakers (in my case some KEF Q350 standmounts).

You can, of course, use an active subwoofer via the Atom’s stereo pre-outs. Adding one of the REL T7 is that was still to hand worked well at providing a bit more welly, particularly helping to fill out TV soundtracks that can sound fractionally lightweight without it. As there’s are no onboard crossover settings on the Atom, you will need to use your sub’s own controls to dial it in.

It’s assured with TV and movie material, but you wouldn’t buy the Atom solely to wire up to your flatscreen.

Indeed, where this black beauty really opens a gap to more mainstream rivals is when you switch to playing music.

It isn’t ‘good for an all-in-one’ system, it’s good full stop. The beautifully integrated streaming front-end sounds punchy and dynamic without ever forcing slower and more considered material. Integration of your own music and albums available via streaming services on the control app is effortlessly slick, and makes extended listening sessions a genuine pleasure. The result of attaching a Rega Planar 6 turntable and its supporting Fono MC phono stage to the Atom’s analogue input is no less musically satisfying and works brilliantly, too.

Naim’s Uniti Atom is an enticing proposition for audiophiles, catering to physical and streamed sources with attention to usability, design and performance. And the HDMI upgrade extends its appeal – I can see this fitting into a high-end second room system, where stereo prowess and compact dimensions are more important that authentic surround. You are limited to using your TV as a source switcher, but the payoff is a product that looks and feels fantastic while delivering sensational sonics

Not inexpensive, and resolutely two-channel, but the Atom is intensely desirable. Perhaps a perfect partner for a premium TV and stereo speaker pair.

1. A proximity sensor wakes up the front display when you approach it. Clever

2. Control is via the Naim App or the neat, clutter-free handset

KEF Q350: The Q series has been retooled for 2017, and the range includes these compact models (-per- pair) toting a single UniQ driver. There are also Q Series floorstander and centre models – plus Atmos modules on the way…