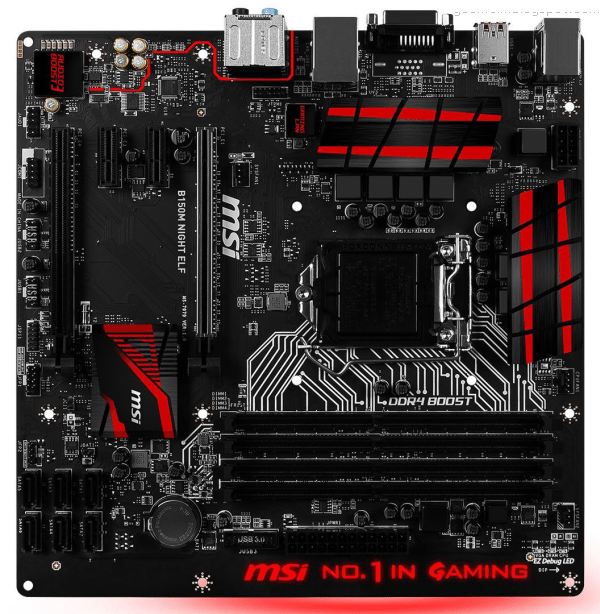 While most of the gaming motherboards for the Intel 6th generation Core processor, aka the Intel Skylake, out there on the market right now is equipped mostly with the high end Intel Z170 chipset, some people do not really want all the features that are present in the chip. Some just want a no nonsense, good to go motherboard with a chipset that just does the job, as well as a bit cheaper.

Hence today, we will take a look at MSI’s offering in this segment. Equipped with the much cheaper Intel B150 chipset, this gaming motherboard looks like a good answer for those wanting a good motherboard without having to break the bank.

The msi b150m night elf review motherboard comes in a rather swanky red box, featuring what else, but an elf on the front of it. The box, as with many motherboard boxes nowadays is two tiered, with the motherboard in an anti-static shield on top. On the bottom, all the other extra peripherals can be found, including a few SATA cables, manuals as well as driver DVDs. No frills here.

The board itself is a half-sized ATX motherboard, meaning it’s a bit short height wise. The color combination of black with red and gray accents looks quite pleasant to the eye, although we would have preferred if it used only one accent colour. A rather large “MSI. No 1 In Gaming” logo is etched in red at the top right side of the motherboard.

The msi b150m night elf review comes with a rather nifty new proprietary technology called the DDR4 boost. What it does is to use various techniques to make sure that the processor will have the best direct W connection to the memory. This includes having a direct, shorter connection from the memory to processor, an isolated memory circuit, as well as optimized routing. This yields better memory performance. The motherboard itself supports up to four banks of DDR4 RAM, with speeds up to 2133Mhz.

The RAM slots for the DDR4 is quite close to the LGA 1151 socket. And on the right side of the socket there is another chip sitting quite close. We do think some overly large third party cooler might have some difficulties staying attached.

One thing that you would immediately notice with the MSI B150M Night Elf is that the first PCI-e x16 graphic slot is colored in chrome. While functionality wise, there is nothing to gain, it looks really cool, especially with the motherboard’s color scheme. The slot is rated PCIe 3.0 x16.

Speaking of PCI-e, the motherboard also includes two PCIe x1 slots as well as another PCie X16 slot, although this one is only rated at 4X speed. This means that the motherboard could only use AMD’s crossfire for a multi-GPU configuration.

In terms of storage, the MSI B150M Night Elf offers users up to six SATA 3.0 ports, rated at a speedy 6.0Gb/s. Sadly there is no option for anything faster, as the motherboard lacks an M.2 SSD slot. This is maybe for cost cutting purposes, but if you’re looking for a 10Gb/s connection, you’re out of luck.

One thing that we are concerned about is that the SATA ports are located straight up the center of the motherboard, instead of on the side like many other models. This could hinder users if they opt to use the lower PCIe X16 slot as we can see long cards covering the SATA ports.

Interestingly while the motherboard lacks the M.2 connector, it makes up with the USB 3.1 ports. All four of them! They can be found at the rear I/O, and are of Type A rated at 10Gb/s. Two more can be connected using the onboard header. The rest of the I/O includes one PS/2 keyboard/mouse combo, two USB 2.0 ports, one Intel Gigabit LAN, as well as a 7.1 analogue audio connector.

There is also a dual link DVI connector to use with the onboard Intel HD. We would love to have an extra graphic output or two, but usually people would be using their own discreet GPU card with a motherboard like this.

MSI has gone out all the way to make sure that this motherboard is the best gaming motherboard that your money can afford. For one, the motherboard utilities the MSI Gaming LAN, which includes the Intel 1219 LAN chipset for optimised gaming throughput, the MSI Gaming LAN Manager to prioritize games packets, customize bandwidth, change traffic priority, as well as LAN protect, a 15KV anti-surge protection to make sure that your LAN port is well protected from a lightning strike.

Also included is the Audio Boost 3 technology. This is to make sure that you have the best audio quality there is, without even having to rely on a discreet audio card. MSI does this by using an EMI shielded HD audio chip, which is isolated from the rest of the board for a clearer audio signal. It also uses chemi-con audio capacitors for high fidelity clear sound, as well as dual headphone amps with quality up to 600?.

For such a small motherboard, the MSI B150M packs quite a punch. Intel XMP support means that you can easily overclock your RAM that is compatible. This helps since the B150 does not support CPU overclocking. Our benchmarking reveals that it’s quite a good motherboard as well. It has the looks, and would certainly fit any casing that features side windows nicely.

Affordable and does its job well. What’s not to like?