In recent months, we’ve reviewed a number of the high-end motherboards GIGABYTE released this summer, including the G A-Z170X-U11 ra Gaming, GA-X99-Ultra Gaming, and the GA-Z170X-Designaire. For those who haven’t kept up, the thing these boards all have in common is support for up-and-coming technology, such as devices that connect via U.2, USB 3.1 Type-C, and Thunderbolt 3. GIGABYTE also has made some notable aesthetic improvements with strategically placed LEDs that illuminate the PCB like never before. The GA-Z170X-UD3 Ultra offers nearly identical hardware support to the GA-Z170X-Ultra Gaming and GA-Z170X-Designaire. But where the Ultra Gaming uses red LEDs and the Designaire features RGB illumination, the GA-Z170X-UD3 Ultra lights up blue. 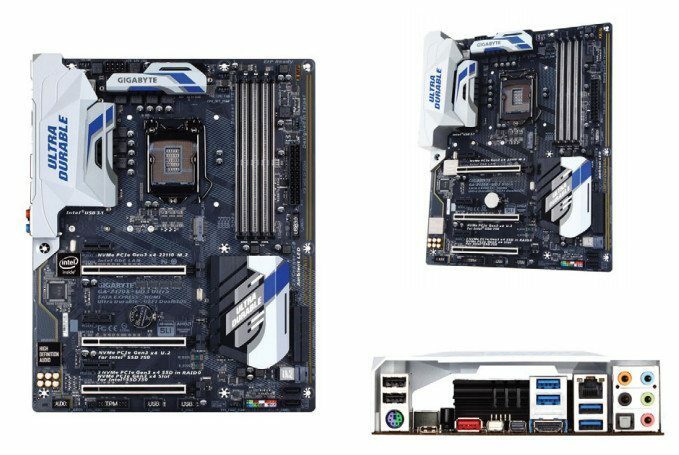 Your preference, of course, may also come down to whether your build’s color scheme includes blue or red. If neither color suits your build, the Designaire’s RGB lighting might be your best course of action. Whatever the case, GIGABYTE’S motherboard variety assures you’ll be able to make your build look great. We particularly like the diffused LED lighting in between the DIMM slots and the LEDs below the PCIe xl6 slots, because the illumination helps to show off key components in your rig. There are also LEDs along the right and left side of the board, which creates a glow around the edges of the PCB.

Beyond good looks, the GA-Z170X-UD3 Ultra has all the tools you’ll need to build an outstanding gaming rig. There’s support for SLI and CrossFire setups, and you can install up to 64GB of DDR4-3866 memory. You have a variety of choices when it comes to PCIe SSDs, as GIGABYTE includes an M.2 slot (Type 2242/2260/2280/22110 form factors), a U.2 port, and a third PCIe xl6 slot that runs at x4 speed—ideal for PCIe SSD add-in cards.

Other Z170 motherboards offer similar connectivity for PCIe SSDSs, but often, the M.2 or U.2 ports share bandwidth with a PCIe xl6 slot— preventing you filling up a rig with multiple PCIe SSDs. GIGABYTE designs the GA-Z170X-UD3 Ultra so you can populate the M.2, the U.2, and bottom PCIe xl6 slot with PCIe SSDs, and you can even RAID the SSDs for ultimate storage speed. The PCIe storage ports do share bandwidth with the six 6Gbps ports, though, so anyone using an HDD or SATA SSD will want check the user manual for which SATA ports are disabled when a PCIe SSD in installed. 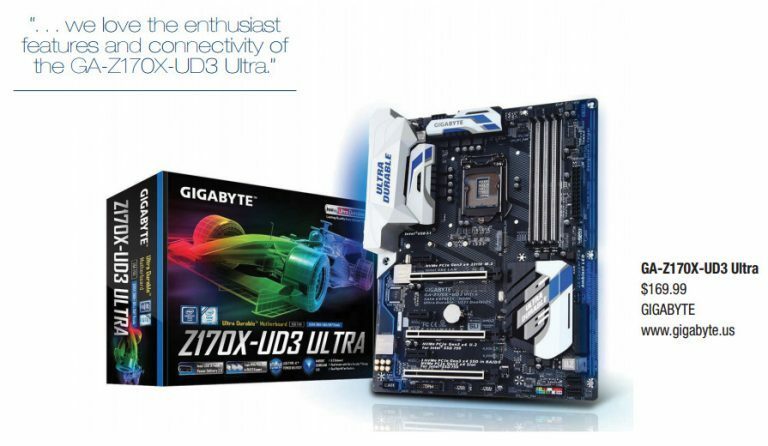 Quality rear I/O connectivity in motherboards is vital for power users. On the GA-Z170X-UD3 Ultra, GIGABYTE includes a USB 3.1 Type-C port that can also serve as a Thunderbolt 3 port after you install a simple firmware update. Thunderbolt 3 offers a bandwidth of 40Gbps, a significant boost over USB 3.1’s 10Gbps, which itself is double the speed of a USB 3.0 port. The Thunderbolt 3/USB 3.1 Type-C port also supports Power Delivery 2.0, which allows it to provide 100 watts of power to connected devices. In short, GIGABYTE makes sure that anyone can utilize Thunderbolt 3 to its fullest extent. The rear panel also features a USB 3.1 Type A port, four USB 3.0 ports, two USB 2.0 ports, and a PS/2 port. 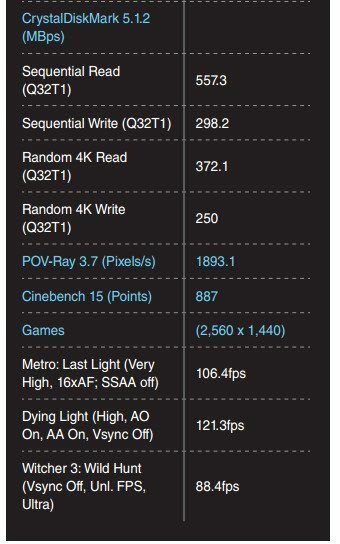 The GA-Z170X-UD3 Ultra’s benchmark numbers are nearly identical to the GA-Z170X-Designaire we tested last month, which makes sense because each board was tested with the same set of components. The exceptionally powerful GIGABYTE GeForce GTX 1080 Xtreme Gaming helps our test system to produce more than 100fps in Metro: Last Light (106.4fps) and Dying Light (121.3fps). The GA-Z170X-UD3 Ultra and Intel’s Core i7-6700K produce speedy numbers in Cinebench 15 (887 points) and POV-Ray3.7 (1893.1 pixels per second).

Just like the GA-Z170X-Ultra Gaming, we love the enthusiast features and connectivity of the GA-Z170X-UD3 Ultra. Among comparably priced Z170 motherboards, the GA-Z170X-UD3 Ultra’s support of Thunderbolt 3 is particularly notable. The board’s blue and white scheme on the board might not be for everyone, but it’s an attractive option for builders looking to get away from the red and black colors so common in today’s hardware.