The ever-cheerful, happy-go-lucky Mayank Sharma hunkers down in his Debian-based distro bunker and awaits the coming Ubuntu apocalypse. 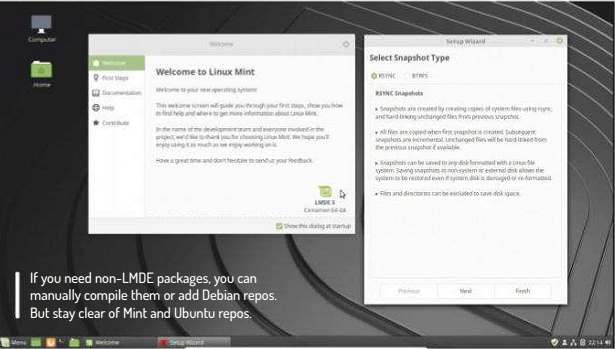 All kinds of distributions, from the desktop- oriented MX Linux to the privacy-centric Tails, are built on top of Debian Stable. While you can install Cinnamon over a Debian Stable- based distribution. LMDE is unique because it’s used by Cinnamon developers to develop and test the desktop.

Most(if not all) of you are aware of the fact that the headline Linux Mint release is built on top of Ubuntu.

But what if Canonical decides to axe the Ubuntu project one day? This question prompted the Linux Mint development team to experiment and swap out the Ubuntu base with a pure Debian one.

The result of its no-small-feat experiment, christened Linux Mint Debian Edition (LMDE). has just had its third major release and is based on the current Debian 9 stable branch. LMDE doesn’t have point releases, which is why this is only the project’s third release since version one all the way back in 2010.

The Linux Mint developers initiated the LMDE project to quantify the amount of work it would require to change the underlying software if. One day, the abacus keepers at Canonical think Ubuntu’s no longer viable. It wouldn’t be wrong to think of LMDE as a very important, but not very urgent project inside the Linux Mint camp.

The base Debian packages don’t change between releases save for bug and security fixes, but the desktop-centric Mint packages are updated continuously. In fact. LMDE acts as a sort of testing ground for Linux Mint.

New desktop-centric features such as updates to the Cinnamon desktop are rolled out to LMDE users as soon as they’re ready; users of the main Ubuntu-based Linux Mint only get them with the next point release.

On the downside however, packages that arrive in Linux Mint via Ubuntu are more recent versions than those that come directly from Debian stable. This means that despite updates, some packages on LMDE could be several years out of date by the time the next release comes out. For instance. LMDE 3 ships with a kernel based on v4.9 which is at least nine point releases behind the latest one. The version disparity continues on the desktop as well, because the programs in LMDE 3 are from Debian’s thoroughly tested Stable branch that are several notches behind their latest upstream releases.

Overlooking the version disparity, there doesn’t appear to be any visual difference between LMDE 3 and Linux Mint 19. They both offer the same user experience thanks to an identical rendition of the Cinnamon desktop. In fact. LMDE 3. unlike the main Mint edition, is only available with the Cinnamon desktop. By default. LMDE 3 uses Linux Mint’s own installer that works well, but hands over partitioning to gparted. For an improved partitioning experience, there’s also the Calamares installer rolled into the menus. Besides partitioning convenience. Calamares also offers useful features such as full-disk encryption. Furthermore, both installers support the older BIOS and the newer EFI installations.

LMDE 3 boots up with Mint’s familiar welcome wizard that include pointers to tools that help influence various aspects of the installation. In addition to the familiar ones like the Software Manager and System Settings, there are also newer ones like the Timeshift tool that takes snapshots of the filesystem using either rsync or btrfs.

The one casualty of the switch from Ubuntu to Debian is the Driver manager, which is conspicuous by its absence.

All things considered who would we recommend LMDE 3 to? The distro would appeal to users who are displeased with Mint’s choice of Ubuntu as a base, but like its customisations including the home-brewed tools and the Cinnamon desktop. If you prioritise stability and security, then LMDE is the Mint edition you should consider.

LMDE 3 offers a better proposition as compared to a stock Debian Stable installation with the Cinnamon desktop, hanks to its newer and coherent integration of the desktop.