With the release of Nvidia’s new mobile Pascal series, gaming notebook performance has taken a giant leap forwards. Last month’s review of the Asus GL502 with Geforce GTX1070 mobile showed that we’ve entered a new era of gaming performance on the go. almost doubling the performance of what we can expect.

Now along comes Metabox to show us what can really be done with this new hardware. It packs twin GeForce GTX 1080 cards into a humungous shell and absolutely obliterates any mobile performance numbers we’ve ever seen before. There’s a reason it’s almost seven grand, and those twin GTX 1080s are why.

Nvidia hasn’t taken a chainsaw to its mobile variant of the GeForce GTX 1080. It packs exactly the same number of CUDA cores (2560). Texture units (160) and ROPs (64) as the desktop part. This is a huge contrast to Nvidia’s old approach of identically naming desktop and mobile parts that were radically different.

The only difference is a slight downgrade in frequencies – the desktop GeForce GTX 1080 has a Core clock of 1607MHz. while the mobile variant drops this to 1556MHz. Yet the Boost Clock remains identical, at 1733MH. and it has the exact same memory configuration; 8GB of GDDR5X over a 256-bit memory bus running at 10GHz. Yowsers.

This is not the kind of laptop you pack into your backpack and haul around all day – dominated by a huge 17.3in 4K screen with G-sync. it harks back to the old school days of enormous laptops. It’s only a 60Hz display, but Metabox will soon be offering a 120Hz option. We’re not sure how heavy it is. but it must easily exceed 5kg. The screen is magnificent, with incredibly rich colors and beautiful contrast. The chassis itself is relatively simple, with a square design offset by a couple of tiny lines of LEDs on the top. Twin power packs are required to run the laptop in SLI mode, but Metabox says only one can be used “if portability is required”. Considering each powerpack probably weighs more than an Ultrabook, we can understand why.

An over-the-top amount of 64GB of DDR 4 memory is installed, along with a Samsung 950 Pro 512GB M.2 drive and 1TB 7200RPM mechanical drive. Killer has been called upon to deliver the networking goods, with 1535 AC Low Latency Wi-Fi and Bluetooth. Twin DP out sit alongside twin Type-C USB 3.0 connections, while on the other side, three USB 3.0 type-A connections are alongside dual Ethernet out.

Intel’s hearty Core i7-6700K Processor (8M Cache up to 4.2 GHz) processor has been included, which can even be overclocked if you’re brave enough. We wouldn’t recommend it though, as this thing did pump out quite a lot of hot air while in action. In fact, the entire chassis got rather warm, so you’ll be needing a desk to use it on unless you want to fry your privates. And yet it wasn’t too noisy, measuring just 46dB on our sound meter; very impressive for this kind of performance. 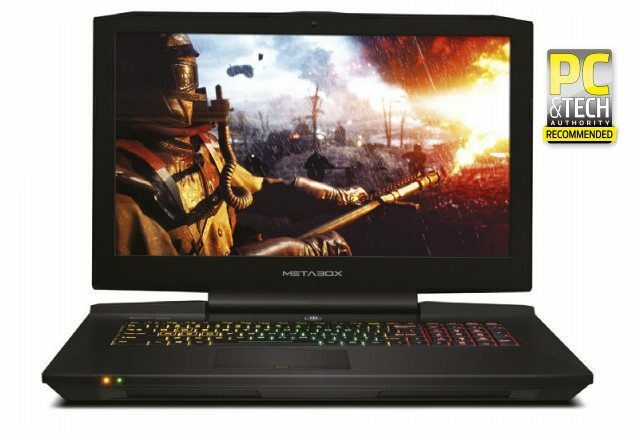 If there’s one thing we didn’t like on this unit, it’s the horrible touchpad, which is incredibly inaccurate. Considering every gamer will use a mouse instead, it’s not an issue.

Given the rather ridiculous hardware specs, it’s no surprise to see that this is the fastest laptop we’ve ever tested. Unfortunately we had to do all of our testing at 1080p to provide comparative results with earlier laptops, but we think the Metabox Prime-X has the guts to deliver 4K gaming if you don’t mind dialling down a couple of the detail settings. 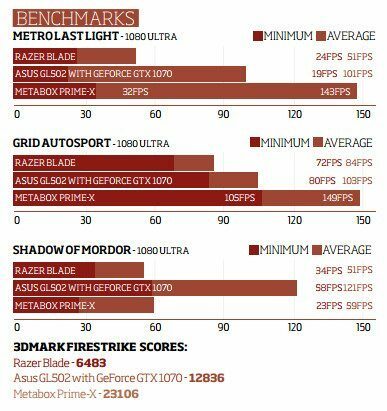 It’s huge, hot and heavy, not to mention downright expensive, but this is currently the fastest gaming laptop in the world. For many, the knowledge that you can’t buy anything faster than this will easily offset the price tag.

It’s huge, hot and heavy, not to mention downright expensive, but this is currently the fastest gaming laptop in the world. For many, the knowledge that you can’t buy anything faster than this will easily offset the price tag.

The Asus ROG Flow X13 is one of the most exciting gaming laptops on the market right now, as it's not just a laptop. This machine is at its best when you buy it alongside the ROG XG Mobile graphics dock, which turbo-charges its gaming ability. The ...
Added to wishlistRemoved from wishlist 0
Add to compare
8.7
$4,060.42
Buy product
Read full review
Specifications
2 x GeForce GTX 1080 Mobile • 64GB DDR4 memory • Core i7-6700K Processor • Samsung 950 Pro 512GB M.2 drive and 1TB 7200RPM mechanical drive