Maui linux – Can Maui show that simplicity and functionality are a winning combo for all KDE-based distros to follow?

Despite Ubuntu no longer being the only distribution (distro) for Linux newcomers, it hasn’t stopped an array of emerging distros based on it. One of the newest on the scene is Maui Linux, based on Netrunner (which is based on Ubuntu, which is based on Debían) but with an all-new focus on KDE at its core. Since its initial release, the distro has gained a small following, but its recent 17.3 release has promised big changes.

Installation hasn’t changed much since the initial release of Maui, and still focuses on the Calameres installer. Now updated to version 3.1, Calamares has proven to be a big aid in most modern distros and remains a vital part of Maui’s overall appeal. 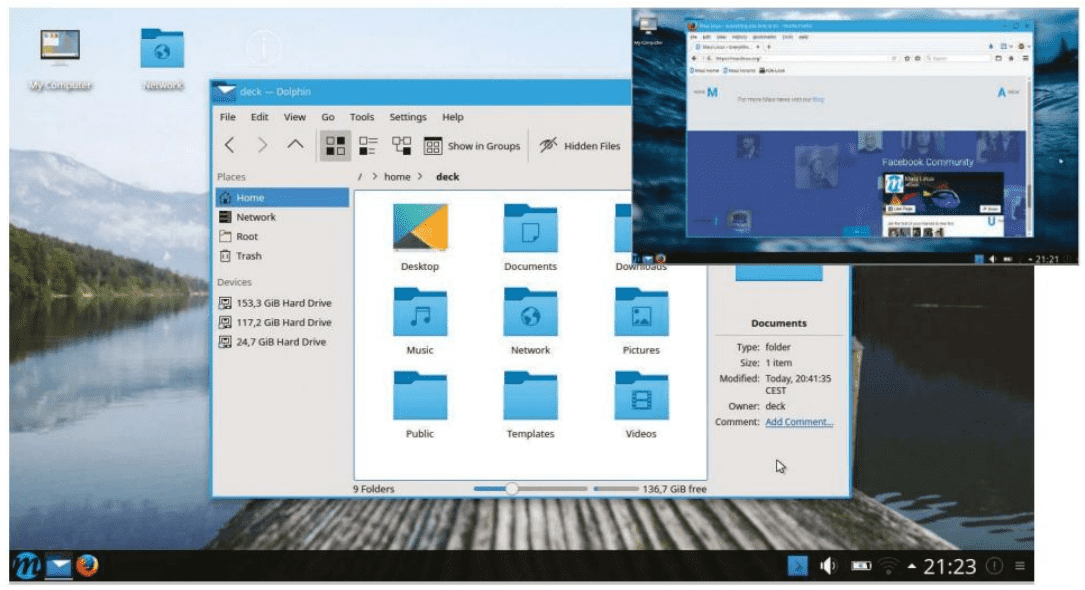 The install process is streamlined from beginning to end. and it’s even easier to install subsequent language packs when needed. One caveat, however, is that users can find themselves needing to toggle a desktop’s network access, which proves to be fiddly through Calameres’s window-based system.

You’ll get all the joys of what KDE offers, so things like simplicity and usability are at the forefront of Maui

Once installation is done and dusted, users are greeted with the familiar KDE Plasma desktop.

For a longtime now, KDE Plasma has been a focal point for a good number of Ubuntu-based distros and while there’s nothing overly unique about its implementation here, it works well. For users, you’ll get all the joys of what KDE offers, so things like simplicity and usability are at the forefront of Maui – and we should mention at this point that Plasma is a great desktop to have around on low-resource machines. Of course, some users will prefer to make it their own. which is possible thanks to numerous options available when it comes to window management, background and general layouts. They don’t necessarily change up the user experience, but they certainly look good.

The main new feature of Plasma’s integration within Maui is a new volume applet, ideal for controlling individual sound levels on your desktop. There’s also a new Minimize All corner trigger, used to gain instant access to your desktop. In principal, it’s a great inclusion, but can be a little tricky to activate correctly at times. While not new, X Window has also got some much-needed TLC here, with the essential development tool now providing support for a greater range of interface toolkits. If you’re at all interested in tinkering with Plasma or Maui in more detail. X Window is essential.

When Maui first launched, one of its weakest areas was its choice of bundled software. Thanks to its KDE integration, that isn’t an issue now. with most of the software choices hand-picked to work flawlessly on the Plasma desktop. Firefox is the native browser of choice and has been updated to version 51, while the latest version of Thunderbird is also included. Both Krita and Kdenlive are also welcome additions, but the latter does seem to cause some occasional slowdown. Managing packages is a strong point in Maui, with the highly successful Synaptic Package Manager taking center stage here. It makes light work of managing and merging packages in one place, but installation is another area where slight slowdown seems to occur.

One of the reasons we’ve grown to really like Maui Linux is that it works out-of-the-box: you could install it and really not need to do anything else with it. That being said, it doesn’t bring anything new to the distro scene, and more seasoned users won’t find much here to enjoy. It’s a good distro. but nothing that we haven’t seen already.

Maui offers all the basic elements that new Linux users could want. It’s easy to use, customisable and has everything you need. But it lacks that identity that has helped take other distros to the next level. There’s nothing really wrong with Maui, mb but there’s little to M get excited about.

Maui offers all the basic elements that new Linux users could want. It’s easy to use, customisable and has everything you need. But it lacks that identity that has helped take other distros to the next level. There’s nothing really wrong with Maui, mb but there’s little to M get excited about.