Marantz PM7005 Amplifier Review – The return to stereo has been almost as remarkable as the resurgence of interest in vinyl. At one stage it looked as if multichannel home theatre had all but exterminated the stereo market, leaving the two-channel segment to a motley crew of purists, traditionalists and music lovers. 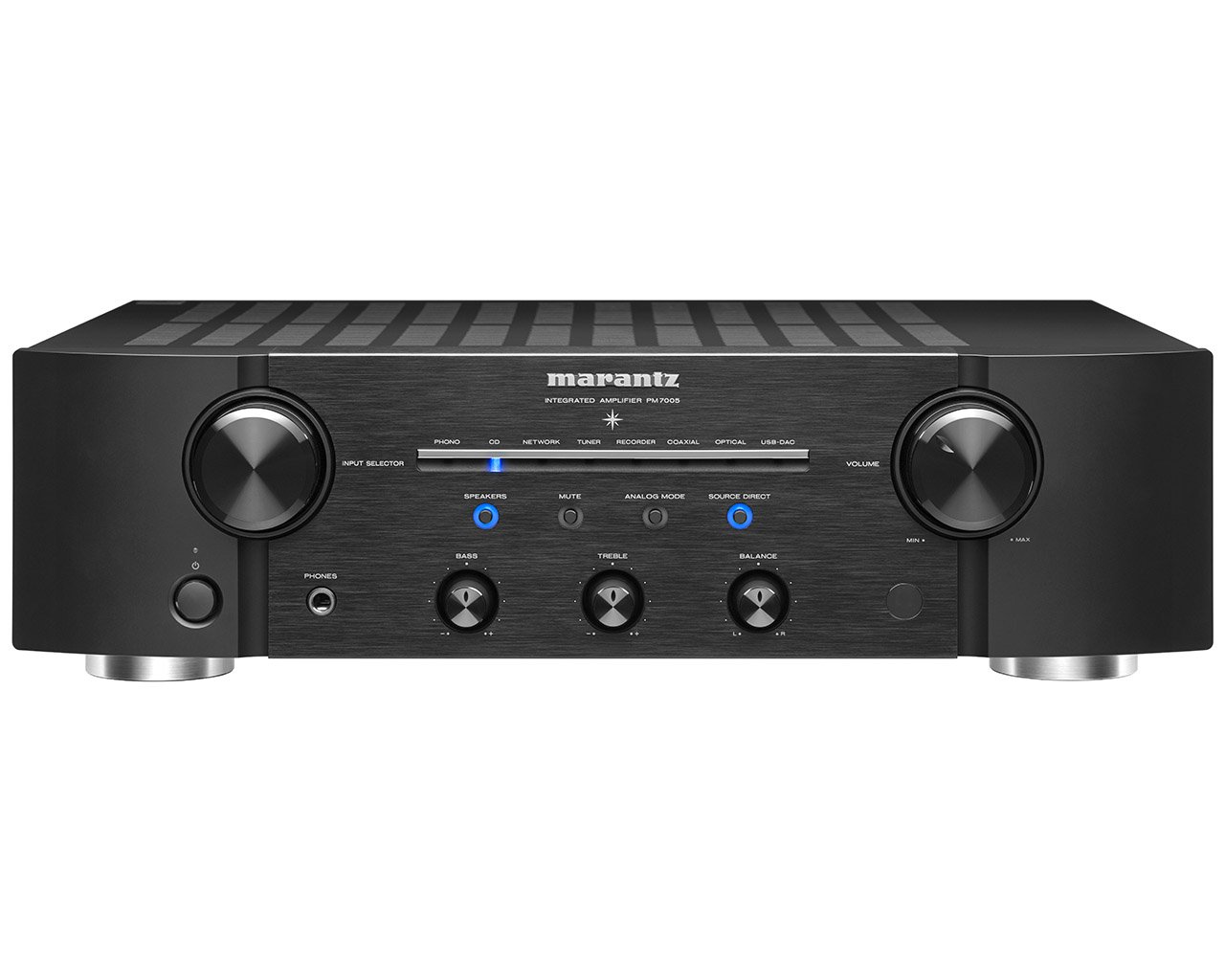 Home theatre has always been sold as home entertainment for the whole family, while stereo is often considered a somewhat solitary pastime. That notwithstanding, stereo is back on the map, encouraging the emergence of a new generation of two-channel gear.

The Marantz PM7005 Amplifier is a good case in point. The neatly styled integrated amplifier is unmistakably Marantz, thanks to the subtly curved fascia, while blue indicator lights confirm which source has been selected. The switchgear layout is straightforward and intuitive.

Large rotary controllers look after source selection and volume, with smaller versions provided for treble, bass and balance adjustment. Small, blue-illuminated buttons are provided for mute and speakers on/off (useful when using headphones), as well as direct and analogue modes.

Direct mode is a familiar feature of many Marantz amps, and cuts out the tone adjustment circuitry in the interests of shorter signal paths to the benefit of signal integrity. But analogue mode is something new: it only operates when used in conjunction with analogue sources, and when invoked, switches off all digital circuitry to prevent digital noise interference.

The rear panel is pretty straightforward, with two exceptions. Firstly, the PM7005 makes provision for hooking up a turntable via a moving magnet-compatible phono input – further confirmation of just how popular vinyl has become.
Ironically, the other innovation offered by the Marantz PM7005 is its integrated digital to analogue conversion via a Cirrus Logic CS4398 DAC chip. The amp offers three digital inputs: coaxial, Toslink optical and a Class 2 asynchronous USB Type ? port.

The USB interface is meant for use with a PC or Mac, and supports PCM files up to 192 kHz/24-bit resolution. But it also handles 2,8 MHz and 5,6 MHz DSD files for those with an appetite for the highest possible resolution.

For this review, the Marantz was asked to drive a pair of KEF R500s, which don’t pose a particularly difficult challenge in load or efficiency terms, but still demand reasonable urge. Also at hand was a pair of Sonus Faber Venere 1.5 stand-mount speakers, which were a tad more revealing, but weren’t able to show off the PM7005’s tonal range as effectively.

Providing the source signal in both analogue and digital form was our Oppo BDP-95EU universal player, while the USB port was fed high-def material from my MacBook Pro, running Audirvana 1.12.5.

I kicked off my listening session with the quite brilliant rendition of Mozart’s Concerto in A Major, KV 219 (2L Records) performed by violinist Marianne Thorsen and the Trondheimsolistene ensemble. The Marantz did well to capture the effervescence and energy of the strings in the opening movement, while paying homage to the sweet, liquid solo violin of Thorsen.

The trebles were keen and lively, but never antagonistically so, while the midrange was smooth and open, offering ample insight and detail, yet steering clear of overindulgence. Lower registers were delivered incisively and confidently. 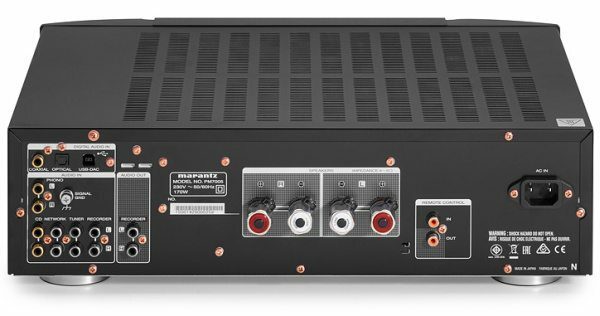 There was a lightness of touch and a clarity that encouraged engagement with the music, while the timing was immaculate, really capturing the spright-liness and sparkle of the performance. Add a convincing ability to recreate acoustic ambience and air, and listening to the Marantz quickly became a pleasurable pastime.

The smooth jazz quartet Fourplay’s silky, late-night numbers on Yes, Please (Warner) were treated with bold, composed confidence, with the Marantz easily recreating the generous soundspace, and populating it with ample ambient and musical detail.

It controlled the often rampant bass well, asserting an authority rarely achieved by modest integrated amps, while the trebles remained liquid without hampering the vivacity of the high notes.

Feeding the Marantz a digital signal from our trusty Oppo BDP-95EU universal deck highlighted the talents of the Marantz PM7005 Review’s in-built DAC: the sonic image was generously presented in all dimensions, with a satisfying sense of air and height, allowing unencumbered access to the music’s canvas of sound and tonal hues.

In this configuration, the amp had no trouble reproducing the rich tonality and incisive attack of cellist Steven Isserlis’ on Tchaikovsky’s Rococo Variations, (Virgin Classics) accompanied by the Chamber Orchestra of Europe under the sympathetic baton of John Gardiner.

The amp easily followed the cello’s intricate solos while doing full justice to its timbre and presence, and presenting it against the generously painted back-drop of the orchestra, creating a sense of dimension and majesty that was both involving and thoroughly entertaining.

That talent for scale and dimension was equally persuasive on Jean Michel Jarre’s live set, The Concerts in China (Sony), which crackled with energy and atmospherics. Jarre’s almost pyrotechnic style, shimmering synths and vast sonic vistas were delivered with immersive verve and authority, and despite the recording’s slight upper-mid bias, the Marantz was able to recreate a sense of majesty and sonic muscle.

The phono stage did a decent job of keeping the incoming signal clean: our elderly but willing Rega Planar 3/Moth RB250/Ortofon 2M Red sounded sprightly and agile, with a low noise floor and a pleasing tonal balance. It didn’t sound as meaty at the lower end of the spectrum as our regular Electrocompaniet ECP-1, and perhaps lacked a little air, but it was musically enjoyable.

Finally, I played some DSD tracks off the Opus3 sampler: the Marantz revelled in the richness of detail and the atmospherics of Cyndee Peters’ unusual, almost languid rendition of the Animals classic, ‘House of the Rising Sun’.

Her almost delicate vocals were carefully juxtaposed against the fat-timbred sax, plaintive acoustic guitar and impactful percussion, and the Marantz had no trouble creating sufficient sonic space for each element to be represented with clarity and realism.

The Marantz PM7005 is a fine amplifier with a raft of talents. Its integrated DAC is both musically proficient and versatile, especially its ability to accommodate PC/Mac-based music streams and DSD files, while the phono stage is a welcome addition, too. The amp’s delivery is powerful and incisive enough to drive a wide range of loudspeakers, while its engaging, musically sympathetic approach should ensure wide appeal. Deon SchoemanAn energetic and musically vivacious amplifier that delivers its sonic wares with real verve and enthusiasm. Integrated DAC adds sonic class.