Mayank Sharma tests a user-friendly Arch-based distro, ignoring the jibes of being called a pseudo Arch user by one very vocal advocate.

Based on Arch Linux, Manjaro is one of the most popular derivatives that focuses on user- friendliness. It supports a wide variety of desktops in both official and community- supported editions.

Manjaro is a fully rolling release distribution that also occasionally puts out install mediums (only for the 64-bit architecture), like the one being reviewed.

Manjaro has occupied the top spot on the distrowatch.com’s page hit rankings for quite some time now. It might not be an accurate reflection of the project’s popularity, but at least shows a steady interest in the distribution.

Manjaro is everything its progenitor isn’t. It’s designed to be user-friendly and aims to provide a complete working installation right out of the box. both characteristics that are antithesis of Arch. While Arch is popular as a do-it-yourself distribution that enables power users to construct their installation from the ground up. Manjaro ships with a user-friendly graphical installer to enable everyone – irrespective of their skill level – to get a taste of Arch’s awesomeness as an everyday desktop.

Manjaro is available in three officially supported flavours, with the Xfce edition being the flagship offering. The latest release sports a new theme named Adapta- Maia along with some other minor visual changes across the system to enhance the user experience. All editions use a customised Calamares installer, which in addition to the cosmetic differences, also enables you to encrypt the partition in which you plan to install the distribution.

Advanced users will appreciate Manjaro-Architect, which is a command line installer that’s designed to help users install a completely custom build with their choice of components including the kernel, init system, desktop environment and more, and will fetch the latest versions of all packages from the repositories. Besides the three official editions, the project also hosts a slew of community-supported editions based around different desktop environments including Budge. Cinnamon. Deepin, Mate, LXDE and more.

The boot menu of the Live environment gives you the option to boot the distribution using either the open source drivers for your graphics card or the proprietary ones. Later on. you can use the Hardware Detection panel in the Manjaro Settings Manager to install and switch between the open source and proprietary drivers for your graphics hardware.

The Xfce edition of Manjaro 18 bundles the latest version of the desktop 4.13. The lightweight desktop follows the conventional desktop metaphor and will suit a large number of users. However, despite the enhancements the desktop experience can still benefit from a tuneup. Many entries in the Whisker menu as well as on the desktop have incomplete names, which look like an eyesore.

Some of the Xfce apps haven’t been tuned correctly, particularly the terminal. It’s transparent, which might work if it’s the only app open on the desktop. However, the transparency makes the text inside the terminal completely illegible, especially if you’ve got some other program windows open in the background. Xfce’s failure to resolve long-standing issues doesn’t help 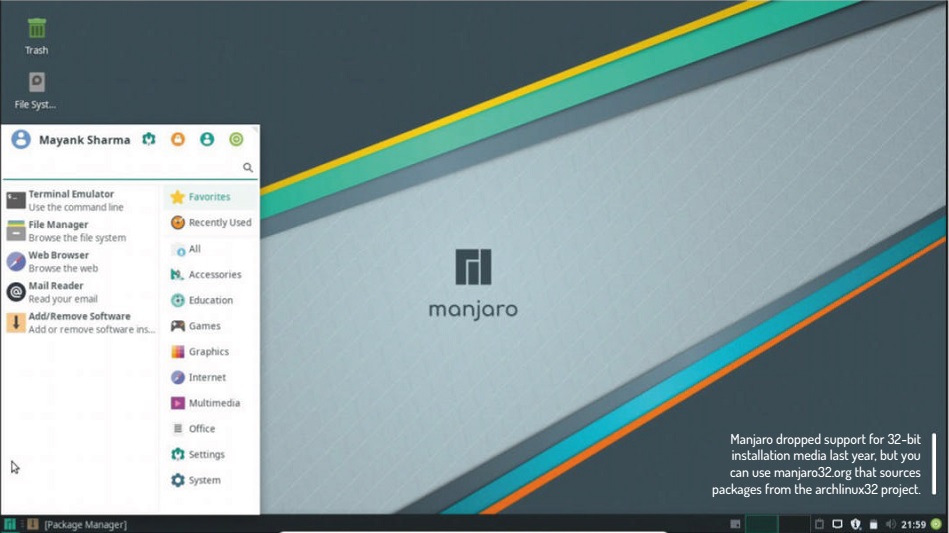 Manjaro dropped support for 32-bit installation media last year, but you can use manjaro32.org that sources packages from the archlinux32 project.

Manjaro’s usability cause either. One such issue with Xfce’s mousepad text editor is the possibility of accidentally overwriting a file. That’s because it opens different files in different windows (not tabs) and doesn’t warn users when saving changes to a file that’s open in another window.

But it’s not all doom-and-gloom on the usability front. One of the new features of this release is Display- Profiles that enables users to save different settings for all the plugged-in monitors. Furthermore, you can ask Manjaro 18 to automatically switch to a saved monitor’s profile as soon as it’s connected. It might not sound like much, but it saves a lot of configuration hassles for users with multi-monitor setups who regularly plug in different external displays, like for instance road warriors shuttling their laptop between the monitors in their home and office.

Upon booting, the distribution greets users with the Manjaro Hello greeter utility that provides quick links to the project’s documentation and support resources. New to this release is the addition of the Applications button that displays an extensive list of popular programs across various categories that you can use to flesh out your installation. That said, unless you have some particular requirements, you can safely skip over installing any additional applications since Manjaro 18 ships with a full complement of programs and can be used straight out of the box. You’ll find all the usual mainstream popular applications such as the LibreOffice suite. GIMP, VLC, Firefox, Thunderbird, Steam client and a lot more.

One interesting tool that caught our attention was Microsoft Office. Spliced in the Office menu are links to Microsoft Office Online that runs as a native program besides the other Linux applications thanks to the JAK wrapper. While LibreOffice’s support for the proprietary office format has grown in leaps and bounds, having access to the proprietary tool itself will make Manjaro more inviting. The mainstream programs are well complemented by the handy utilities from the Xfce stable.

When you do need to flesh the installation from the repos, you can use Manjaro’s Pamac package manager that also doubles up as the update manager. The latest version of the package manager. Pamac v7.2, includes a new command-line tool named pamac-cli, which is similar to Debian’s apt-get. For some reason, the KDE flavour doesn’t use Pamac. It uses the popular pacman frontend, Octopi. And yes. you can still use pacman on the CLI on all the Manjaro editions.

Another major USP of Manjaro is the distro’s custom tools encapsulated in the Manjaro Settings Manager. One of the best tools in its box is the kernel switcher. Manjaro 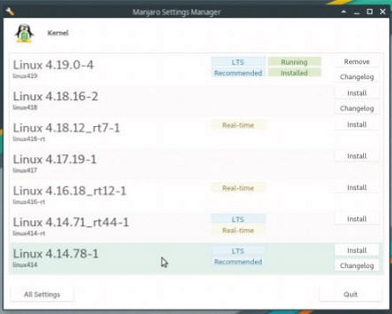 The project has extensive help and support resources. Their wiki is fairly detailed and well categorised and the distribution bundles a detailed PDF user guide.

18 enables users to choose from eight different kernels – from the latest v4.19 all the way back to v3.16. including three real-time kernels. This wide range of kernel support ensures that Manjaro 18 can run on the latest hardware as well as on legacy hardware. Bonus points to the distro for taking the complexity out of two of the most common but cumbersome processes of Linux administration: compiling and installing kernels and switching between free and proprietary graphics drivers.

With its custom tools and bundled apps. the ready-to-use desktop scores highly in both form and function.

The Manjaro project occasionally produces limited-edition hardware for its ardent community of users. The latest of these Manjaro- certified devices is the Bladebook Fall 2018. These devices sport a 13.3-inch FHD IPS display and are powered by the Intel Celeron N3450 processor along with Intel HD Graphics 500. They use a 64GB eMMC disk as their primary storage device and come with 6GB of DDR3L RAM and an 8000mAh battery that can power the portable computer for up to eight hours. Manjaro has put up 100 units of the Bladebook in its online shop and you can get one for CHF 259.05. which is just a shade under £200.

Surprisingly, instead of the marquee Xfce edition, the Bladebook runs the KDE-flavoured Manjaro. This is the KDE edition that ships with Plasma v5.14 and the KDE-Apps vl8.08 set of programs. It gets a newfangled Display Configuration tool that will be useful to those who regularly use their laptops to connect to projectors for giving presentations. While the KDE desktop does look a bit more polished than the Xfce one. using a transparent background in the Kickoff application launcher looks out of place.