GT75VR 7RE Titan – 018AU Review – This is a rather unique review for us, as the unit supplied isn’t the one that is currently available. The existing MSI GT75VR on the market is equipped with a GeForce GTX 1070, while our review sample comes with a GTX 1080. Thankfully the name should change – the 1070 equipped version is the GT75VR 7RE Titan – 018AU, while the 1080 equipped version will be known as the GT75VR 7RF Titan, and is due for release in late 2017. 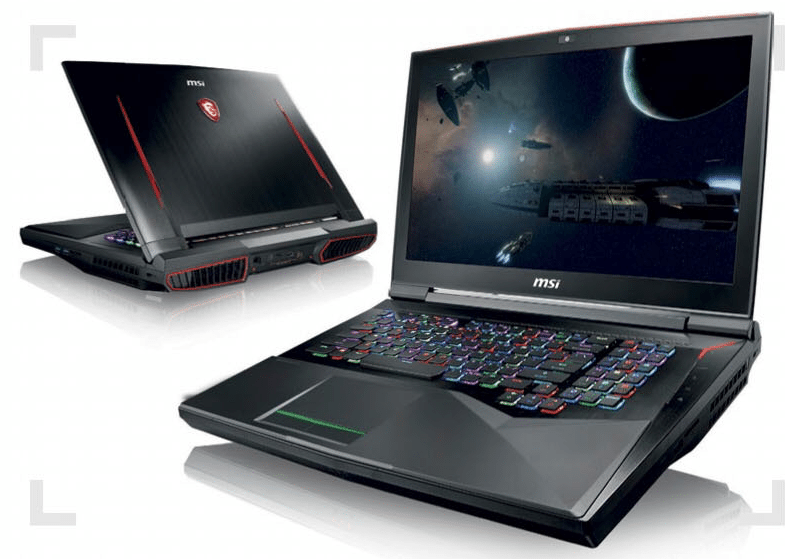 As a result, our benchmarks don’t really indicate the true speed of the GT75VR 7RE Titan – 018AU; you can expect performance to drop by around 20 to 30%. Other than the GPU though, the rest appears to be identical. This is a true gaming laptop, tipping the scales at a back-breaking 4.4kg, and that’s without the huge power brick.

It’s got a full 17.3-inch HD 1920 x 1080 display, which comes with both a 120Hz refresh rate and Nvidia G-Sync. It’s a stunner of a screen, and is exceptionally bright; we had to lower the brightness a little so it wasn’t quite so blinding. The keyboard is made by SteelSeries, and it’s a real winner when it comes to how it feels. It’s definitely got the look of a gaming machine, and the Steel Series keyboard has per-key RGB lighting. Our review sample came with a twin Samsung M.2 SSDs setup in RAID 0 mode, for a total capacity of 475 GB. Backing this up is a huge 1TB 7200RPM mechanical HDD. Finally, an i7-7820HK CPU handles processing duties.

HDMI out, mini DP out, mic in and audio out. Streamers will appreciate the extra audio in and out ports. This model comes with 32GB of DDR4-2400MHz of memory, while Killer supplies both Ethernet and Wi-Fi networking, with its Killer DoubleShot with Killer Shield tech.

In terms of performance, it’s hard to say where this machine stands; as mentioned, our unit came with a 1080, while the retail unit has a 1070. As such, we’d round the results down

given the hardware, we weren’t surprised to see the 112 minute battery life

by about 30%, which seems to be the average difference between a 1070 and 1080. Given the high-end hardware, we weren’t surprised to see the 112 minute battery life during our PCMark 8 Home Accelerated battery test.

When measured against other laptops in the same range, MSI has delivered a behemoth that stands up well against the competition, slightly outdoing the likes of the Gigabyte Aorus X5 v7. Don’t expect to move it around much due to the weight, but if you’re looking for a powerful, full-sized gaming laptop, this will fit the bill nicely. BENNETT RING

MSI has stacked this 4.4kg slab to the brim with the best of the best.