An exceptional screen and brilliant audio, but this fine laptop runs hot – and that hits battery life

It isn’t only Microsoft making its laptop debut this month: Chinese phone giant Huawei has also just launched the MateBook X, and what an excellent debutante it is. For a start, it squeezes a 13in screen into a body the size of a 12in MacBook.

Huawei achieves this through delectably slim bezels surrounding the display: a mere 4.4mm on either side of the screen, with 8mm at the top to allow the placement of a webcam (take note, Dell). 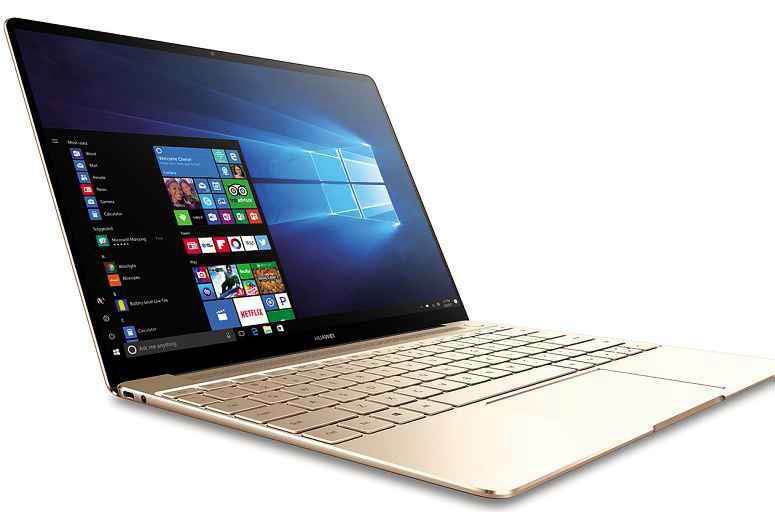 It’s done this without adding weight – the whole package tips the scales at a mere 1.05kg – which is all the more impressive considering it has an all-metal body. It’s available in three colors – gold, rose gold (aka pink) and grey – but don’t choose the pink version unless you want to stand out. I had more comments about my laptop from colleagues than any machine I’ve reviewed.

The keyboard is nicely laid out with large keys and a light action that’s not too mushy. There’s a dual-purpose fingerprint reader and power button at the top right above the keyboard, which works well; a wide, usable touchpad below it; and a pair of USB-C ports, one on each side to the rear.

This is where the first negative note comes in. Only the left port can be used for charging the laptop, and only the right port supports external monitors. Yes, that’s right: you can forget about powering your MateBook and using a screen with a single cable, which is one of the most joyous things about a laptop with a correctly configured USB-C port.

But I can forgive this, because the MateBook X’s screen is phenomenal.

Those small bezels I mentioned earlier deliver an astounding 84% screen-tobody ratio. It’s at the now-fashionable 3:2 aspect ratio and provides 2,160 x 1,440 pixels, which is ideal from normal viewing distances.

Brightness reaches 414cd/m², so you won’t struggle to read the screen even in the brightest of conditions, while sRGB coverage is a decent 92.8% and the contrast ratio 925:1. To my eyes, this is the nicest screen I’ve seen on any laptop from any manufacturer.

Developed in partnership with Dolby, the speakers deliver audio that sounds not just ‘great for a laptop’ but great, full stop

The subjective quality of a screen is all about the balance between resolution, size, contrast and brightness rather than dry statistics, and Huawei has hit the sweet spot.

ABOVE There’s a choice of three colors, but only opt for rose gold if you enjoy the attention

The MateBook X’s speakers are just as good, delivering audio that sounds not just “great for a laptop” but great, full stop. Developed in partnership with Dolby, they’re the world’s first Atmos-branded laptop speakers, and they don’t let the brand down. There’s not a huge amount of bass (that’s physically impossible for something this size and format), but the sound produced here has depth, presence and clarity.

Where Huawei has made sacrifices is in performance. If you want good performance in an ultraportable, you’re better off with a Dell XPS 13.

Our review sample is the base model and has a Kaby Lake Core-i5 7200U processor with 4GB of RAM and a 256GB PCIe Liteon SSD. That looks pretty good on paper.

The catch is that the MateBook X falls short when you hammer the processor hard, which is almost certainly due to thermal limitations imposed by the design. It’s fanless, and the case gets hot when pushed – I measured it at 46˚C at one point in the tests – which means the processor throttles back to avoid overheating.

Although single-core performance was fine, the MateBook X performed poorly in our demanding multitasking benchmarks, dropping the overall score to 31, or 38% less than the Dell XPS 13. The MateBook X is still the equal of the XPS 13 under normal use, but as soon as you push it hard, it will fade badly.

Battery life is good but not exceptional. The Huawei lasted 7hrs 11mins in our video rundown test with the screen set to 170cd/m². That puts the MateBook X a long way behind the Surface Laptop, but not far off the XPS 13 with a similar resolution screen.

Every laptop design is a compromise between portability, power, battery life and design, and the MacBook X is no exception. It sacrifices power for a fanless and highly portable design that I prefer to the Dell XPS 13, but also forsakes the exceptional battery life of the Surface Book for more power.

It isn’t perfect – note the USB-C niggles and the toasty chassis – but, if you want a highly portable laptop that delivers a decent balance between power and battery life, then the Huawei MateBook X is a great machine.