Nate Drake is like a cat, drawn to dazzling desktop effects and laser pointers.

This is the fifth and current generation of the desktop environment created by KDE primarily for Linux.

Plasma 5 has been in active development since July 2014 and is maintained as a separate software project following its own release schedule. It has an excellent reputation for rich graphics, an intuitive and customisable interface as well as excellent performance. 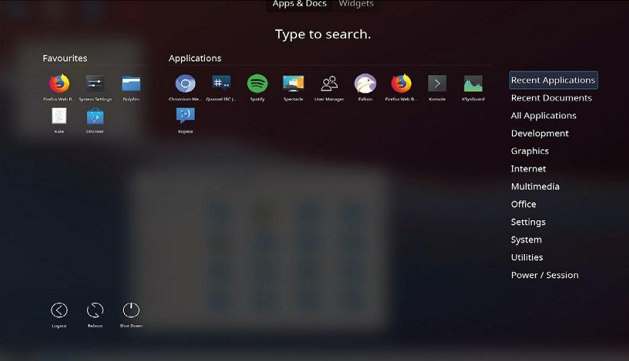 You can now search for widgets to add to your choice of browser.

However, the Plasma team hasn’t relied only on its reputation in this latest version: clear effort has been made to enhance the desktop environment with more features and smoother running.

Plasma 5 has already received online praise for using OpenGL, which makes use of your machine’s GPU. In theory this makes for better overall performance and less power consumption, but occasionally OpenGL drivers can fail due to updates/third-party programs. If this occurs, the latest version of Plasma 5 automatically switches to software rendering. While Plasma 5 has always supported HiDPi, version 5.13 now displays a dialog whenever you connect an external monitor, making it much easier to place.

Blurring and desktop switching effects are now much slicker thanks to the improved KWin. The desktop panel in particular has been subjected to some vigorous coding to help it run more smoothly on older machines.

KDE’s Kirigami Framework has been put to good use to give the interface a thorough polish. Some of these changes are more subtle, such as maintaining as consistent theme for tools, icons and cursor theme pages. The app store now attempts to use your local icon theme to match those on your desktop.

Other changes are more obvious, such as the fact that you can download new splashscreens from the KDE store. The lock and login screens now show the Plasma wallpaper by default. The lock screen also has an elegant ‘fade-to-blur’ transition when you access options. KDE claims that the desktop load time is now faster, although we didn’t see a huge improvement in start-up times in our tests.

Desktops effects have been improved in Plasma 5, and even users of older machines will benefit from the behind-the-scenes changes.

One of the most exciting features in the latest Plasma 5 is browser integration. Firefox/Chrome/Chromium users can install the corresponding plug-in in their browsers’ app stores to ensure that any downloads appear as a notification on the desktop. The Media Controls Plasmoid (widget) also enables you to mute and skip videos when playing in browser.

The Plasma team has continued to work on support for technologies such as Snaps. These are packaged files containing Linux apps and their dependencies, which makes them easy to install, upgrade or remove. Snaps can also be sandboxed: this makes them safer than traditional programs because you can control permissions. Plasma 5.13.0 now supports the snap:// URL format and installation of Snaps that use classic mode. Flatpaks are also supported, which gives you much greater control of your applications. Programs must request your permission for access to hardware devices and user data.

If you’ve never used KDE, consider running openSUSE Tumbleweed. This installs the latest version of software as soon as it becomes available.

Hugely configurable (some might say too configurable), extremely fast and well documented. This isn’t really a daily driver distro, but it’s certainly fun to use!.