juice nano bar review – Juice is a relatively new company formed under the Gusto name, which was born just four years ago. The company centers on developing products for the mobile world, device peripherals if you will, catering for power, connectivity, cables and audio. 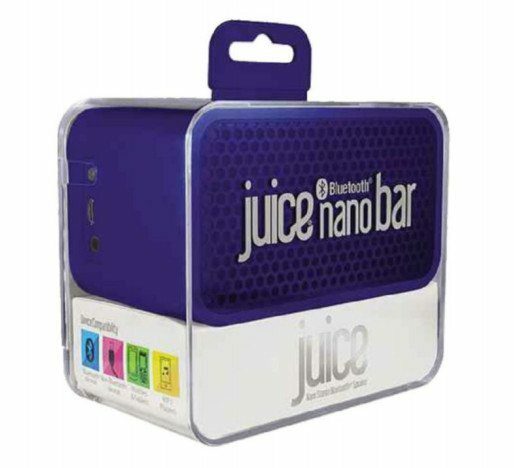 The Juice Nano Bar speaker may be small, but it’s surprisingly loud

It’s the latter we’re interested in here, with the launch of the Juice Nano Bar Speaker, a small, but surprisingly capable stereo speaker that measures 110 x 63 x 63mm and weighs 265g. This remarkable little Bluetooth speaker certainly has a lot going for it, but can it compete with the countless other portable Bluetooth speakers currently available?

A simple and effective design hides a cracking speaker within.

The design of the Nano is better than most of the portable speakers we’ve come across in the past. The rubberised, nonslip chassis is both sturdy and pleasant to look at, coming in either an all-blue colored case or all black, with a glittered effect. The top of the Nano bears the Juice name, with three buttons embossed into the rubbery surface: volume up and down and a function button to pick up, reject and hang up any incoming calls when attached to the device and pause any music played via the device.

On one side there’s a power switch, micro-USB charging port and an aux port for line-in non-Bluetooth devices to play media through. The front and rear are encased in a plastic mesh, behind which the Nano’s pair of 40mm 3W drivers sit. Beyond that, there’s nothing much else to add to the aesthetics; it’s a plain but decent-looking device that’s portable enough to be thrown into a rucksack, handbag or in the supplied cloth bag.

In terms of audio performance, the Nano leaves the other portable speakers we’ve used in the past behind.

It’s loud, clear and with a good level of bass that complements the music you’ll push through it. Although there are only a pair of 3W speakers in use here. Juice has done a magnificent job of producing some of the best portable audio out of our growing collection of Bluetooth speakers.

It’s not just mobile devices that can benefit here either. The Nano does a good job of keeping up with laptops, desktops, monitors and pretty much anything else that you can feed through the Aux port. However, the NFC and Bluetooth connectivity are where the Nano shines, and connection to a device is a quick and painless affair.

Finally, the 800mAh battery manages to last just over ten hours off a single charge, with a zero to full charge taking around three hours to complete. This time obviously depends on the volume and how often you’re connecting and disconnecting from the device, but in our tests we managed to make it drag on for around eleven and a half hours before the Nano’s battery packed in.

The Juice Nano Bar is a fantastic portable speaker. It’s loud enough for outdoor use, without invading on the privacy of those around you; tough for use in the field; and it’s perfect for use in the home. What’s more, it only costs £26.99, which is a bit of steal for such a good Bluetooth speaker, mm David Hayward