Most monitors have a resolution of 1920×1080 pixels, matching a Full HD TV set. If your living-room TV is, say, 48 inches, and your monitor is 24 inches, the monitor will be twice as sharp. And it needs to be, because Windows shows you a lot of fine text and icons that Coronation Street doesn’t. 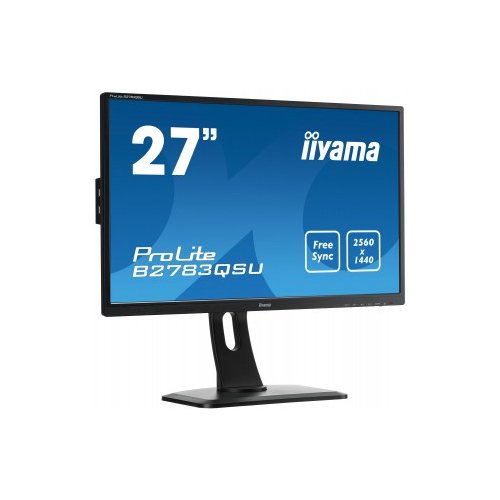 As monitors and TVs get bigger, Full HD is beginning to feel less crisp, and manufacturers would like to sell us all 4K or ‘Ultra HD’ displays, with 3840×2160 pixels. Not surprisingly, they cost more, for basic models that give you the increased resolution but compromise in other areas.

The alternative is a 27in monitor with a middling 2560×1440 pixels. Unlike 4K screens, these can be used in Windows 10’s standard display mode without the danger that text and icons will be too tiny to make out, meaning you don’t have to fiddle with Microsoft’s scaling options. Iiyama’s ProLite B2783QSU costs less than many high-quality Full HD monitors, and besides the higher resolution it comes with FreeSync, which makes games play more smoothly if your PC has a recent AMD Radeon graphics card.

The catch is that its LCD panel uses cheaper TN technology. This becomes obvious if you look at the screen from above or below, which casts either the top or bottom of the display into shadow. Thankfully, the stand offers plenty of height and tilt adjustment (you can even pivot the screen 90 degrees to show documents vertically), so getting the right angle isn’t hard. We also noticed some ghosting, though, on moving elements such as the cursor, and that won’t impress gamers very much.

On the other hand, color reproduction was excellent, covering almost 100 per cent of the sRGB spectrum with generally high accuracy, although reds were slightly off. The backlighting was bright and even, so this would be a good choice for photo and video work. A two-port USB 3.0 hub lets you plug in USB drives and other accessories without reaching to your PC or trailing extra wires.

The ProLite B2783QSU is a good monitor in most respects, and some users will find its flaws easy to put up with. It has competition, though, from the likes of AOC’s Q2778VQE, which is even cheaper and doesn’t have the same problems with viewing angles or ghosting, though it lacks the adjust ability.

Sacrificing LCD quality for pixels may not be an entirely bad idea, but it makes this monitor feel like a compromise.