There’s a lot to like about the spec list attached to HP’s Omen 27c. This monitor’s 27in panel has a 2,560 x 1,440 resolution, a 240Hz refresh rate that’s compatible with both FreeSync and G-Sync, and a VA panel with a 1ms response time. It has a 1000R curve too, which does a great job at increasing immersion. Read our HP Omen 27c Review.

The panel has slim bezels and a diamond-shaped base, and the similarly diamond-shaped section on the rear means the ports don’t face downwards, so they’re easy to reach. In terms of ports, the HP is equipped with single HDMI and DisplayPort connections alongside a USB Type-C port and two USB 3.2 Gen 2 connectors. There’s also a robust joystick on the rear for controlling the responsive on-screen display.

In other practical areas, though, the HP is inconsistent. Its stand has 130mm of height adjustment and 25 degrees of tilt movement, but there’s no swivel or pivot motion. It’s awkward to build too – the stand attaches to the display with two downward-facing screws that are difficult to reach.

Comparatively, the Asus TUF Gaming VG27AQ arrives with its stand pre-attached, and the AOC AG273QZ has a tool-free assembly mechanism. Those rivals are more compelling in some other areas too – the Asus has an IPS display and Extreme Low Motion Blur (ELMB), albeit at 165Hz, and it now costs £. Meanwhile, the AOC monitor pairs its 240Hz refresh rate with a 0.5ms response time, but it uses TN technology. 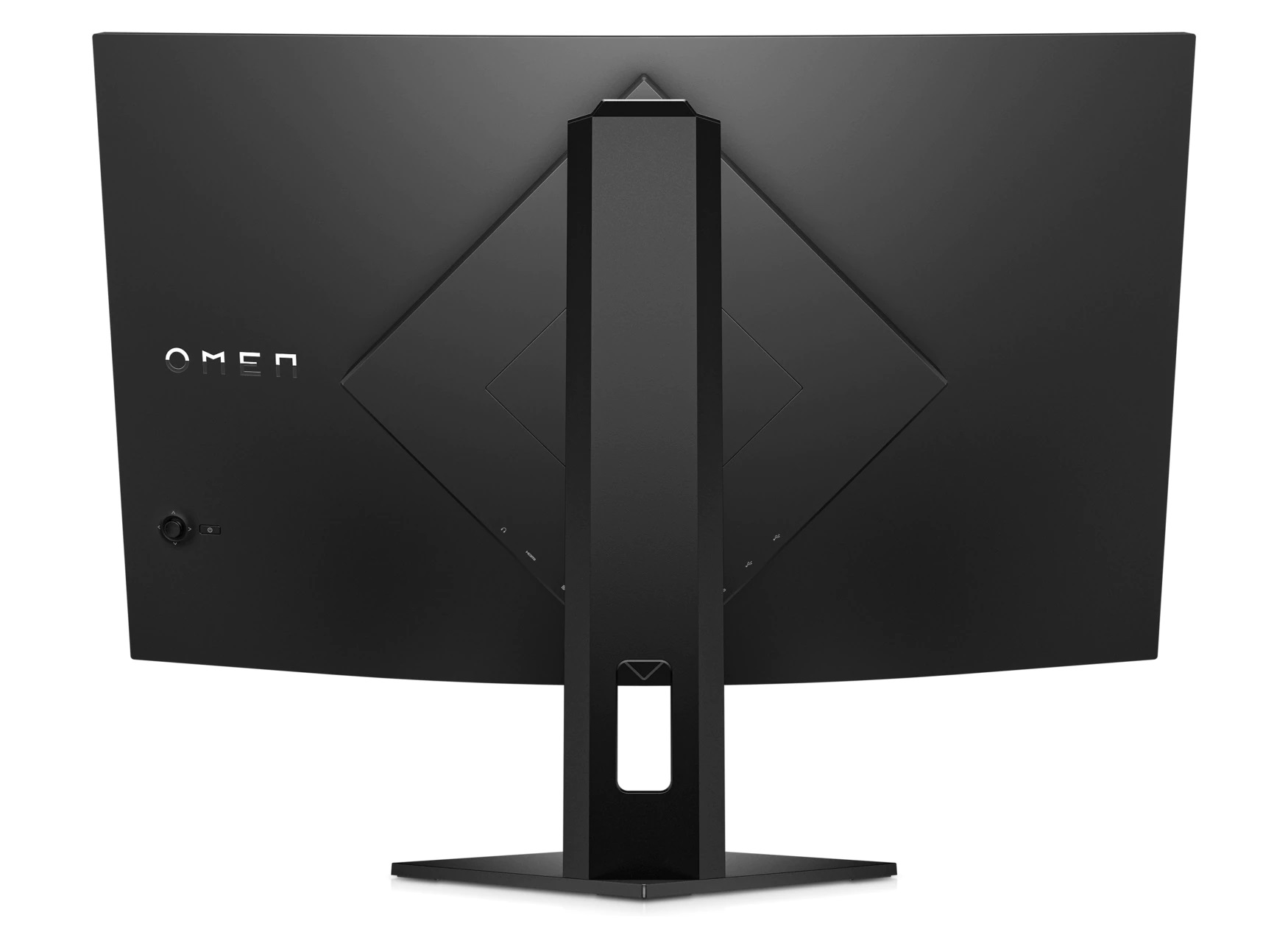 The diamond-shaped section on the rear means the ports don’t face downwards, so they’re easy to reach

The benefit of the HP’s VA panel, however, is its high contrast. Out of the box, the HP produced a brightness level of 195cd/m² and a black point of 0.06cd/m². That latter figure is fantastic, and it means the panel supplies a contrast ratio of 3,250:1. That’s superb, and it helps the HP to create incredible depth and vibrancy, with deep blacks.

Colour accuracy is good as well, with delta E and colour temperature figures of 1.58 and 6308K, although the panel only rendered a middling 88.6 per cent of the sRGB colour gamut. With its TN panel, the aforementioned AOC AG273QZ had poorer contrast, and the Omen’s punchy image looks great in games and video, even if its gamut handling could be better. 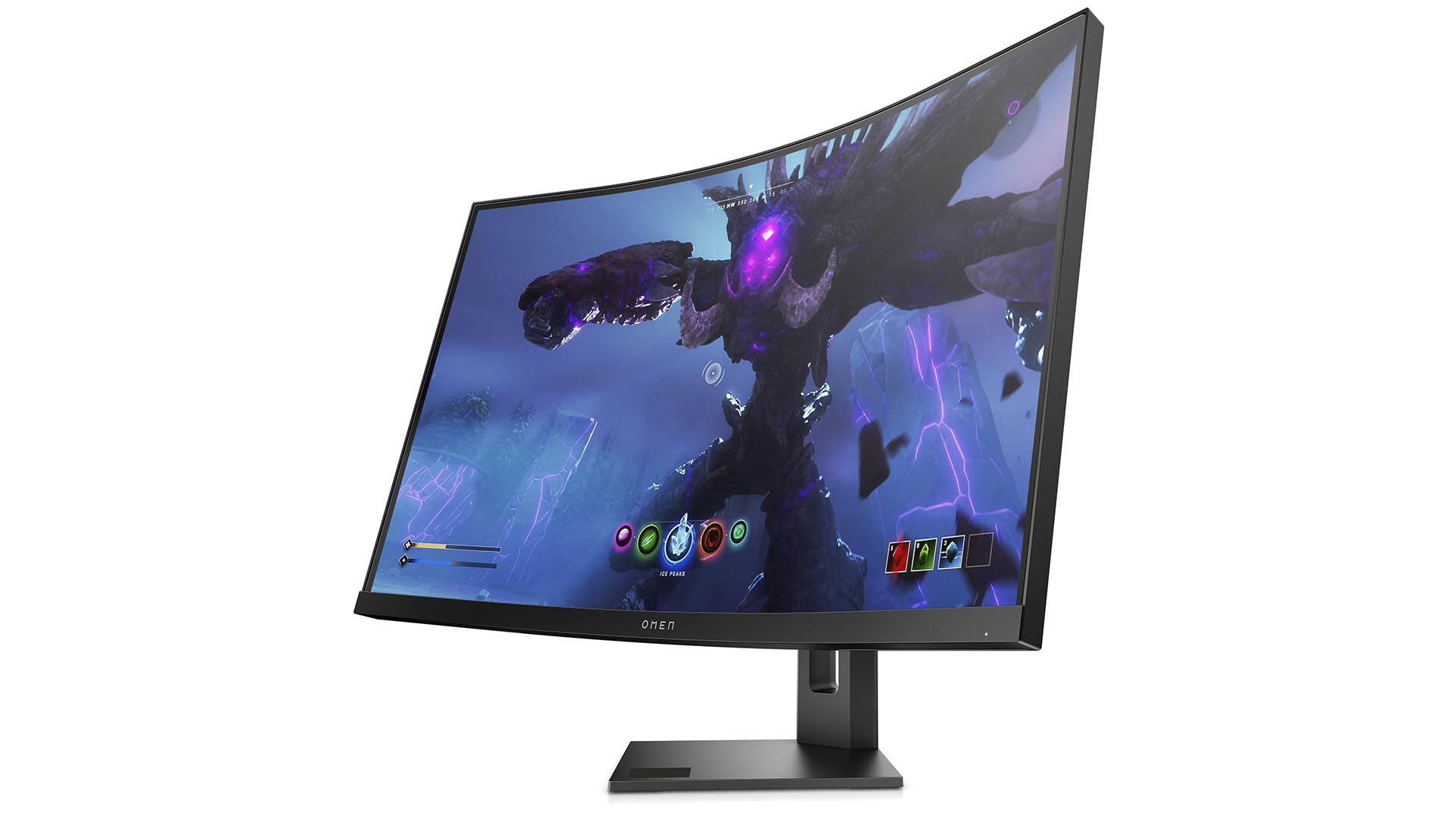 As with other VA gaming panels we’ve reviewed lately, though, while the Omen can indeed refresh at 240Hz, there’s visible ghosting. The OSD has overdrive levels from 1-5 (there’s no 0 option), but even at the lowest level you can see ghosting. At the top level, you could also see lingering ghosting when objects appeared on darker backgrounds and obvious inverse ghosting in lighter areas. The middle overdrive options supplied the best balance and eliminated inverse ghosting, but conventional ghosting never went away entirely.

These issues aren’t terminal if you’re playing single-player games, but they’re not ideal for fast-paced esports gaming. Comparatively, the cheaper Asus TUF Gaming VG27AQ uses ELMB to do a better job of removing ghosting, even if it only runs at 165Hz.

HP’s Omen 27c offers fantastic contrast, an immersive curve and good colour reproduction, resulting in great-looking games. The 240Hz refresh rate provides crisp, fast motion in most scenarios too. It’s a shame, then, that this screen can’t eliminate all of its ghosting, especially for the relatively high price. That’s the Omen’s biggest weakness, and it means this display isn’t really suitable for fast-paced esports gaming, even if it’s great in most other situations.

£208.00
Added to wishlistRemoved from wishlist 0

$976.99
Added to wishlistRemoved from wishlist 0

$202.95
Let us know your thoughts on a product or view reviews from our members, independent experts and other websites.