HP’s Color LaserJet Pro MFP M277DW is a multi-function color laser printer (MFP). Its basic functions include sending and receiving faxes, and making color prints, scans or photocopies, but that’s just the start of things. Connect it to your network using either an Ethernet cable or the built-in Wi-Fi adapter, and you can share it with everyone at home. As expected for a modern MFP, it also supports a wide range of additional features, all of which are controlled using a color touchscreen. 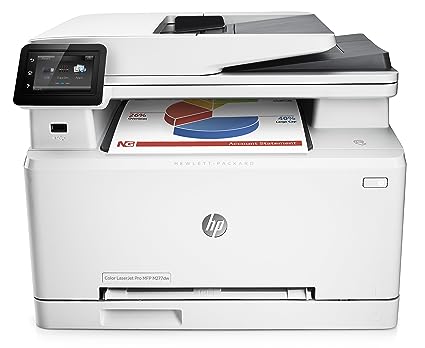 The HP M277DW isn’t as big as you would expect for a laser printer and it has an impressively unfussy casing. The off-white plastic is broken up with the minimum of vents and flaps, and the use of a touchscreen means that the only physical button is the power switch. At more than 15 kilograms it’s deceptively heavy, though – we’d recommend getting help to lift it.

At the base is the paper-input tray which is easy to pull out and load. It’s good for only 150 sheets, though; some rival MFPs manage 250 or more. Above this is a bypass slot for a single page of one-off media, such as an envelope or headed paper. Printed pages come to rest on top of the printer, above which is the scanner and its 50-sheet automatic document feeder (ADF). Using this, you can make unattended photocopies or scans of long multi-page documents.

The touchscreen is excellent. While it isn’t that large, it has clear icons and responds quickly to taps and gestures – it’s like using a simplified smartphone. From here you can control basic tasks such as faxes or copies, but there are more advanced options, such as printing a file stored on a USB stick or saving a scan to one. The USB port itself is located just underneath the touchscreen.

There are multiple ways of printing from iOS and Android devices. You can use Apple’s AirPrint or HP’s ePrint – the latter lets you simply email the files you want to print to the printer itself. There’s also support for Google Cloud Print, which lets you print documents from a Chromebook or indeed any computer connected to the internet. Of course, you needn’t bother with any of this if you don’t own any of these devices; there’s conventional Windows software too.

Tested with our PC, the HP M277DW printed five pages of black text in 27 seconds, and took the same time to print five pages of business graphics. While that’s some way off the claimed rate of 18 pages per minute (ppm), it began to approach this on longer jobs, reaching 14.5ppm over 20 pages. Photocopies weren’t sluggish either, with a single black copy needing only 14 seconds, while a 10-page copy completed in just 45 seconds – it was barely any slower in color. Scans were also fast: it took us just 12 seconds to capture an A4 document at 300 dots per inch (dpi): a middling amount of detail.Scan quality was more than good enough for archiving documents and other office work, while black prints and copies were excellent. We were disappointed, however, with the accuracy of colors in photocopies and prints. The former were a little dark and dingy, while the latter tended to have a bluish tint.This MFP takes four separate color toner cartridges which are available in both standard and high-capacity varieties. It’s cheaper to use the latter, resulting in a cost of 9.2p per page of mixed text and color graphics, while printing just black text costs 2p per page. That’s not unreasonable for a laser MFP at this price, but a comparable inkjet MFP would cost less to buy and run. Despite some strengths, then, the HP M277DW is only fair value.

This MFP has plenty of easy-to-use features, but we’re disappointed by its color prints and copies, and we wish it was cheaper to run.