How to get Windows 10 cheap (or even for free)

How to get Windows 10 cheap (or even for free)

Yes, you can get a properly activated version of Windows 10 for free. by alaina yee 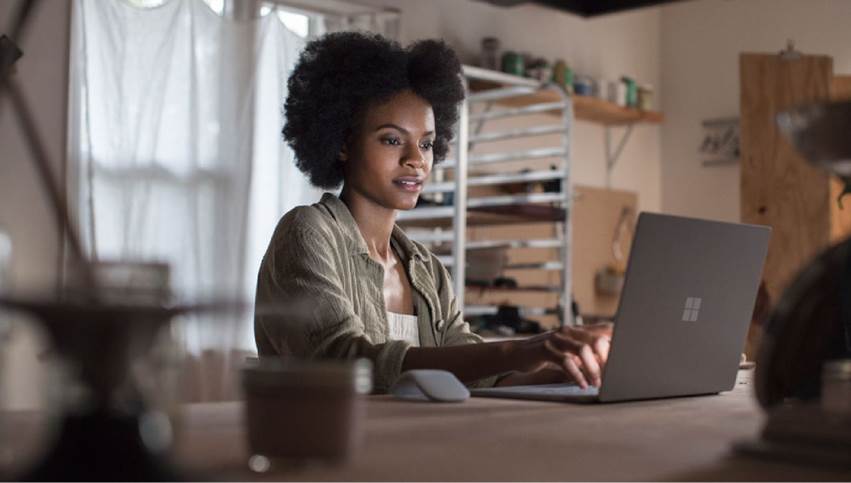 Windows 10 licenses are expensive—almost painfully so. Shelling out $139 for Windows 10 Home or $200 for Windows 10 Pro feels rough when Linux is free and Windows 7 still hasn’t been completely put down. That amount of cash can easily be a third of a budget PC build.

But with less developer support for Linux and the end-of-life deadline rapidly approaching for Windows 7, Windows 10 is an inescapable necessity for most of us. What’s not a given is paying full retail.

Yes, it’s possible to snag a discount on Windows 10. The amount you’ll save depends on how much hassle you can tolerate—as well as your circumstances. If you’re lucky, you could technically get Windows 10 for free. (Legitimately for free, because installing Windows 10 without ever activating it doesn’t quite count as getting a full, sanctioned copy of Windows.)

If you have an old Windows 7 or Windows 8 PC lying around, you may still be able to reuse its key to activate Windows 10. When Microsoft first launched Windows 10 back in 2015, it offered Windows 7 and Windows 8 users a truly free, no-strings upgrade to the new operating system. The promotion was only available for just one year— presumably to accelerate push-up Windows 10 adoption rates—and expired in July 2016 (go.pcworld.com/10fq).

But even though Microsoft officially ended this program three years ago, it still has yet to completely shut everything down. 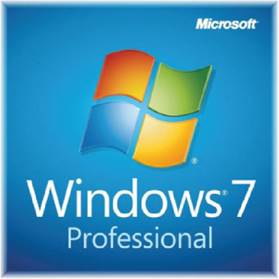 The activation servers have been allowing Windows 7 and 8 keys on some Windows 10 installs.

The Windows 7 or Windows 8 product keys that commonly work for this method are the retail and OEM varieties, while only sporadic reports exist for volume license keys (i.e., enterprise or educational licenses) working with this loophole.

If you don’t have your license key easily accessible, you can find it by using a program like Magical Jelly Bean Product KeyFinder. (You can read our step-bystep guide for how to use that particular program at go.pcworld.com/mgcl.)

Once you have that on hand, you’ll enter it one of two ways: Either when prompted during the installation process if you’re doing a clean install, or through the Change Product Key option in the Activation section of Windows 10’s settings.

If the product key is recognized, you’ll be issued a digital license that associates your machine with the key, so you should be good to go for the future if this method ever expires, as Microsoft had previously said it would. 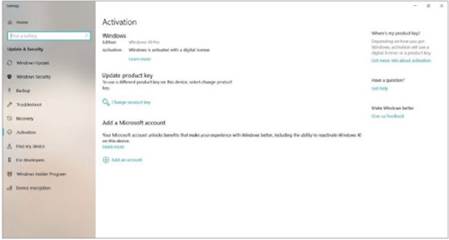 If using a Windows 7 or 8 key works for activation, a digital license will be issued to you. 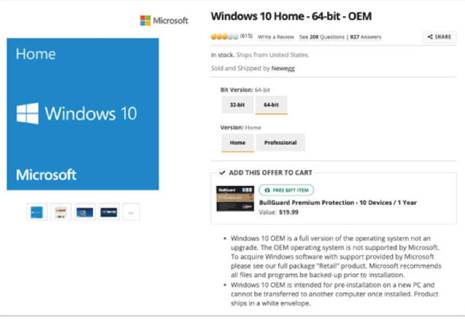 Our next suggestion is a method that’s available to everyone and has the least amount of hassle: Purchasing an OEM license.

License types are different than operating system versions: They dictate what you can do with the software, while OS versions are distinguished by the features available. Multiple Windows license types exist, but the two commonly available to a home user are the retail and OEM varieties. When you walk into a store or pop over to Microsoft’s website, handing over that $139 for Windows 10 Home (or $200 for Windows 10 Pro) gets you the retail license. If you visit an online retailer like Amazon (go.pcworld. com/am10) or Newegg (go.pcworld.com/ne10), you can find both retail and OEM licenses for sale. You can usually spot an OEM license by its price, which tends to run about $110 for a Windows 10 Home license and $150 for a Windows 10 Pro license.

All the features of the operating system version are the same for both license types. The difference is that with a retail license, you can transfer the license key to a different PC later on.

You can’t do that with an OEM license. In exchange for a lower price, you get to use the license key on only one PC, period. If you build a system but roll a new one four years later, you can’t transfer the license (go. pcworld.com/reac) to the new machine.

Also, if the hardware used to identify your system fails—namely, the motherboard—Microsoft’s registration servers won’t recognize your license as valid after you replace the dead part. Microsoft has historically been kind about such 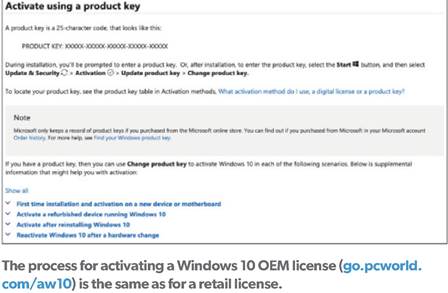 situations, however; you can usually call to reactivate the license after replacing a fried mobo. But it is an extra hassle.

For further savings, you’ll have to wait for the rare sale or Black Friday, when you can get an OEM license in the neighborhood of $85 (Windows 10 Home) to $120 (Windows 10 Pro). Otherwise, if you want to shave down costs further, it’s going to take work—or a deep locus of calm when your associates criticize your life choices. (Skip down to “Low prices with a caveat” for details.)

Not all student discounts are reserved for the under-24 set. Your local community college might be a source for a free or extremely discounted copy of Windows 10—and it’s nearly the equivalent of Windows 10 Enterprise, to boot.

You’ll just have to put in some legwork (perhaps literally) to get it.

As mentioned above, license types determine what you can do with Windows—and who can use it, as well. Through the Academic Volume Licensing agreements, schools can purchase access to Windows 10 Education for their students, faculty, and staff. Some make it available only on campus machines. Others will grant a license for use on a home machine.

In that latter camp are a number of community colleges, and they often make the Windows 10 license free or supremely affordable (usually $15). The catch: You have to sign up for at least one course to qualify for campus discounts.

To get access to the software, you’ll typically need to 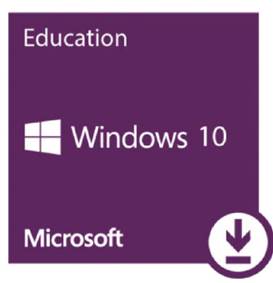 register for your class first, then find and register separately at whatever online store your campus uses for software purchases. (Many community colleges use OnTheHub as their distributor, so you can use their lookup tool (go. pcworld.com/lkup) to begin research about your school’s options.) The storefront will require verification of your student status before you can “buy” Windows 10.

A one-unit class suffices, though, and depending on your state, it costs as little as $76 including administrative fees. Typical 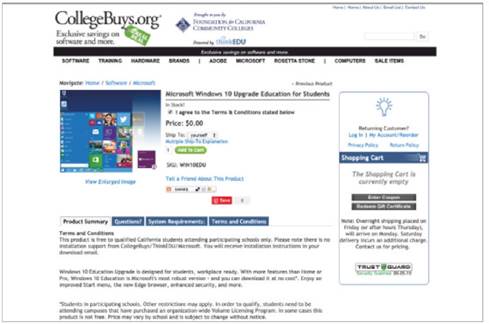 For California’s community colleges, CollegeBuys (go.pcworld.com/clby) is the vendor through which you’ll “buy” Windows 10. Other states use OnTheHub (go.pcworld.com/othb), which has a tool to look up your school. 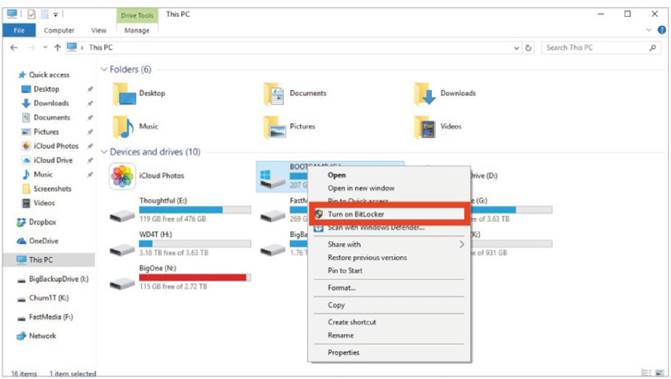 options are usually of the physical education or dance variety (swim, ballet, jazz, boot camp workouts, etc.), but you can also find the occasional class on topics like Beginning Drawing, Intro to HTML & CSS, and Video for the Web.

If you were already planning on taking a class in one of these subjects, you’re getting an amazing deal. Windows 10 Education, which is similar to the enterprise version of Windows 10, includes popular Windows 10 Pro features like Bitlocker encryption (go. pcworld.com/btlk) and the Windows 10 May Update’s Sandbox feature (go.pcworld. com/snbx). You’re essentially getting Windows 10 Pro (and then some) for as much as 60 percent off and you get to learn something new.

Even if you aren’t interested in the classes, you’re still paying considerably less than what you would for even a Windows 10 Pro OEM license. We don’t encourage truancy, but there’s nothing saying you have to show up for class, so long as you’re comfortable with a failing grade on your record.

Obviously, if your local community college doesn’t have an agreement with Microsoft in place, this strategy won’t work. Also, if the total cost of the class, administrative fees, and license fee adds up to more than the retail cost of a Windows 10 Pro license, and you wouldn’t have otherwise taken the class, that negates this deal, too. In those cases, your main options are the OEM license (outlined above) or buying through Kinguin (detailed below).

Note: If you use this method, also keep an eye out for other software deals through your school. For example, your school might offer a free Microsoft 365 account, or a heavily discounted Adobe Creative Cloud account (usually $20/mo).

LOW PRICES WITH A CAVEAT: KINGUIN

Scoring Windows 10 at an 85 percent discount isn’t too good to be true, but this surprisingly low-hassle approach comes with a large dose of controversy.

Kinguin (go.pcworld.com/ kgin) is a website that allows buyers to purchase product keys from third-party sellers—think of it like an eBay or Amazon Marketplace for digital software sales. To buy Windows 10, you’ll look through the Windows 10 Home OEM or Windows 10 Pro OEM listings, pick a seller’s product to add to your cart, and then check out. It’s the same as any other digital storefront.

What makes the license keys so cheap—and opinions about buying through Kinguin so fierce—is that they’re gray market at best. In other words, while not illegal, they’re likely extra keys from a volume licensing agreement that were never meant to be sold individually to home users. Opponents of Kinguin swear the keys will eventually lose their activation status because of their unknown origins.

These keys are also for an OEM license of Windows 10, which means they’re meant for only one PC to use at one time. So as mentioned above, if these keys are already somehow tied to an original (but unactivated) PC, things could go sideways during your own activation process. 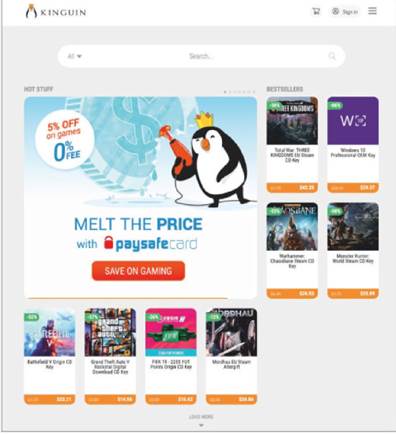 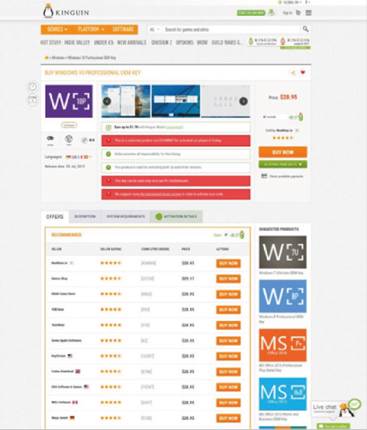 On Kinguin, like on Amazon Marketplace, you pick a specific seller from which to buy the product (in this case, the Windows 10 license key).

Additionally, if you want to transfer the license to a different PC down the road, you can’t. On top of that, if the hardware used to identify your system (i.e., the motherboard) bites the dust and you replace it, Microsoft’s registration servers won’t recognize your system and automatically activate the key.

Though Microsoft has historically gone easy on home PC builders caught in this situation, their goodwill may be harder to rely upon if you can’t prove that you directly purchased an OEM license from an authorized retailer.

Proponents of this method counter that buying Kinguin’s Buyer Protection (go.pcworld.com/kbyp; currently an additional $5.57, and included in the price listed above) covers you in sticky situations with bad sellers and eliminates the risk of troubles. In our office, staff members who’ve advocated this method of obtaining Windows 10 for years have reported no problems so far.

Each camp makes valid arguments, so ultimately, your comfort level with risk and gray market goods should determine whether this is the option for you. If you opt for this path, we recommend ignoring Windows 10 Home. An extra $2 for the Pro license nets you Bitlocker encryption and other Pro features, which are more than worth it. 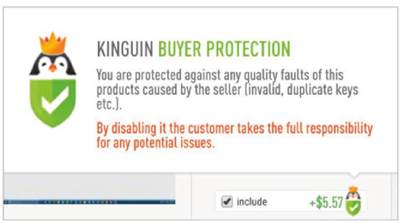 Kinguin’s Buyer Protection works like eBay’s: If anything goes wrong with your purchase, you’re covered. It’s a must if you buy a license key through them.