After some initial enthusiasm, mainly due to the lightness and the very long battery life, I left it almost unused: even if I added to it some Linux magics by setting up Crouton, actually it was a web browsing system.

Few months ago, ChromeOS support for this particular model came to an end: it was time to refresh that small rig with a new operating system.

I decided to eliminate ChromeOS and to install a new operating system, therefore, in order to enable EFI booting and to make the most of the hardware, I removed the write protection screw and I flashed a new firmware by MrChromebox firmware utility script (https://mrchromebox.tech/).

By the way, it is worth mentioning that MrChromebox tools are great: the documentation is crystal clear and the pieces of software are working perfectly.

Afterwards, I tested a number of mainstream distros; however, each and every distro I tested had the very same main issue: internal sound card not working. 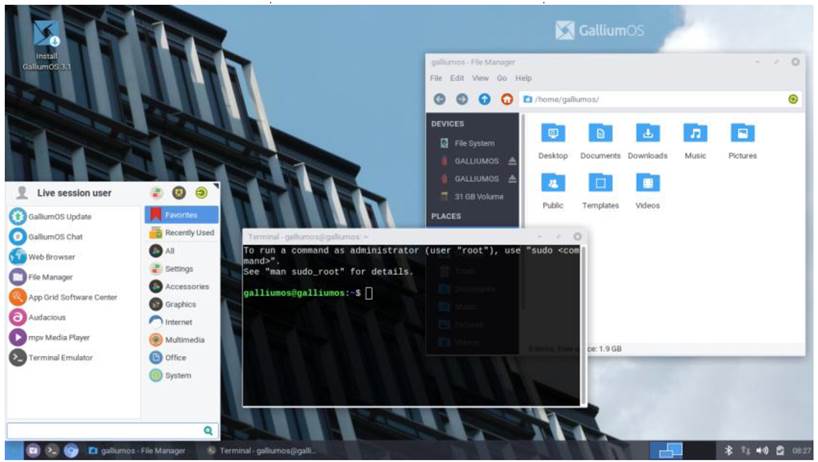 Eventually a web search drew my attention to GalliumOS, the distro specifically dedicated to Chromebooks and Chromebox.

GalliumOS 3.1 is based on Ubuntu 18.04 and it is offering the Xfce desktop environment, which brings limited overhead on resources and great flexibility in setting it up to everyone’s taste and needs; the team is backing 9 different variations of the distro for 9 different architectures of Chromebooks and Chromeboxes.

I tested the GalliumOS specific Bay Trail iso: everything was almost working in the live system, even if the internal sound card volume was very low on both speaker and headset output.

On the official website (https:// galliumos.org/) is to be found a documentation section that, beside other useful pieces of information, gives very precise directions about the installation process, which could be dual-booting with ChromeOS, full ISO installation, or Virtual Machine Installation.

As planned, I went with the full ISO installation.

The installer, Ubiquity, is the same as Ubuntu 18.04 except for the branding; it can be started from the live environment.

After a full update of the new system, and a reboot, GalliumOS was using around 395MB, around 0.5% of my small CPU, and about 5GB of internal storage; after installing the few apps I needed it was using about 6GB out of the 32GB available on the internal storage.

It was possible to choose a keyboard layout that enabled F keys on the first keys row, which hosts volume, brightness, screens, etc. keys, and a second function activated by the search key in my case (overlay key).

The touchpad is working smoothly, right-click is mapped as two fingers tap. Both keyboard mapping and touchpad configuration are precious features added by the GalliumOS team. 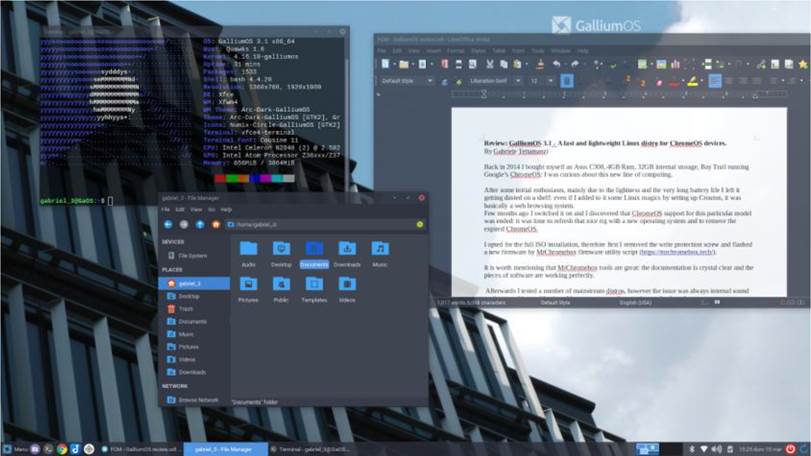 There are a few specific GalliumOS themes, including icons and windows decorations, and there’s the compositor Compton running under the hood to grant a nice looking and tearing-free user interface. I tweaked Compton parameters in its configuration file in order to add some transparency to window frames and inactive windows.

We find two GUI package managers: the well known Synaptic, and AppGrid, a visual software boutique presenting the different applications in a grid, as the name is suggesting. I’m used to using the terminal for package management, if I had to choose between AppGrid and Synaptic, my preference goes to Synaptic, by far more responsive. Gdebi is available too, helpful to install packages not coming from the sources managed by apt.

Two media players are available, Audacious for audio files and Mpv for videos.

The installed browser is Chromium, and the usual good Xfce tools are to be found: Whiskers menu, Thunar file manager, Catfish for file searching, Xfce Terminal emulator and the Xfce Settings manager; inside it is the last one, the panel manager, offering different pre-organized layout with one or two panels.

Out of the box, GalliumOS shows a lean desktop layout with a bottom bar menu and no icons on the desktop. The collection of pre­installed software is essential, I added neofetch and htop (CLI utilities), Gimp (image editor), qbittorrent (torrent client), Olive (video editor), LibreOffice (office suite), Joplin (note taking tool), and Chrome (web browser) to complete it. Oracle Virtualbox, which I installed and used for Android emulation (see below), is working, of course it is suffering from the limited hardware performance. Snap packages are working, however they are significantly slower, especially when starting up, than the installed packages are.

I’m definitely not a game player, and we cannot expect high performance from a computer like this, however I tested Super Tux Kart which runs well.

The project, including bug tracking, is hosted on Github and there’s a friendly community on the Reddit channel, r/GalliumOS. There’s also an IRC channel, I never tested it.

Till now, after two weeks of use, I had some issues with the internal sound card and I wasn’t able to use my smartphone in usb tethering mode. Expanding a bit on the sound card issues, out of the box the headset mic was not working and the volume was poor on

full circle magazine #160 internal sound card; I fixed the two of them by editing the configuration file (HiFi.conf) of my card; furthermore GalliumOS comes with a nice pulse audio interface panel applet, named pastray, which turned out to be the reason for crackling or suddenly muted sound; I replaced it with the standard Xfce volume applet and the issue disappeared.

I tried to install Android emulators (Anbox, Genymotion and AndroidX86) with the aim of running Android apps, however my hardware is too weak to run them decently – to be honest, I did not have Android apps support under ChromeOS, and I do not need them.

Maybe other distributions are more polished than GalliumOS is, however the overall experience is very good – with fast boot, responsiveness, nice looking interface, and long battery life: I do not regret ChromeOS at all.

•    distro tailor-made for Chromebooks and Chromeboxes.

•    very good hardware support when compared to other distros.

•    specific to my hardware, issues on internal sound card out of the box.

•    it runs a GalliumOS kernel, apparently not connected with the Ubuntu 18.04 kernel maintenance system.