After a recent buy-out of the company, John Knight explores the final release of Flint OS before it all changes to something new.

Based on Chromium 62, this is Flint OS’s final build and was released at the end of 2017. Flint OS will now be merged into CloudReady and forked into FydeOS. Designed to run off a flash drive. Flint OS is a portable OS that can make any PC run like a Chromebook. 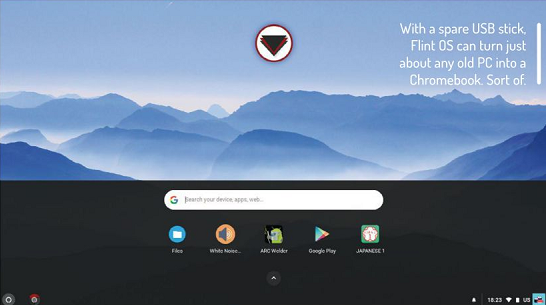 Disit the Flint OS website and the first thing you’ll see is a message saying that Flint have been acquired by Neverware Inc. Flint OS is being merged into Neverware’s existing Chromium distribution, CloudReady, and the existing team will continue working on a new product called FydeOS. But before all of that happens, we wanted to try Flint OS’s final release.

Based on Chromium OS. Flint’s vision for the future is one where all applications and services live in the cloud – where all apps are run through the browser, and installing apps will be relegated to history.

Flint OS is available for PC, VMWare, Raspberry Pi, and the ASUS Tinker Board. Although Flint OS can be installed to a hard drive, it’s designed to boot off either a USB flash drive or an SD card.

On first boot, you’ll need to run through the setup dialog. Flint OS seems to remember your settings on subsequent boots, but bear in mind that each time you use a different PC, you’ll have to complete the setup again. This isn’t a huge problem though, because it only takes a couple of minutes.

Once inside, the actual desktop will look very familiar to any Chromebook user, save for a few branding touches and some light tweaks to the GUI. Most of the team’s improvements have gone into porting the OS over to multiple platforms and making the startup process work smoothly.

Flint OS is meant to breathe new life into old hardware, but performance is difficult to gauge. An old Vista-era laptop of ours ran Linux Mint quite respectably, whereas Flint OS felt quite sluggish. On the other hand, running YouTube in full-screen would cause the laptop to overheat in Linux, whereas in Flint OS the machine was cool and unflustered.

Anything less than 2GB of RAM (at least for PCs) resulted in momentary freezing at random intervals, and the touchpad didn’t work on even common Dell models until we plugged in a mouse and choose different settings. Although you can install it to the hard disk, this is still in testing and you must do so by the Terminal, and use the entire hard disk. Some machines boot, while others just give a black screen.

Although Chrome OS is undergoing fundamental change with Android support, this feature is still under development for Flint OS and not yet available to the public. Chromium OS’s stricter OSS parameters also mean that DRM content such as Netflix doesn’t work under Flint OS, although a workaround is on its way with Widevine.

Despite these limitations, Flint OS is likable and stable where it matters. And there’s no getting away from the fact that an OS you can take with you and plug into any PC is pretty cool. If your computing nirvana is a cloud-based world made entirely of Googley Googleness. then this may be just what you need. Other than a few more IQ points. And reliable internet.

Outside of that niche, Flint OS’s minimalist nature may appeal to schools, charities and medium-sized businesses in particular, for whom old or cheap hardware can be repurposed with a system you can’t really break. While it’s difficult to predict how CloudReady or the Flint team’s new FydeOS will look in the near future. Flint OS and CloudReady have already proved popular among these kinds of clients.

It wouldn’t be surprising if these Chromium-based OSes relaunch a trend in “smart terminals”, especially among large organisations looking to reduce operational IT costs. With the technical legwork already done by Flint to run on multiple platforms, this OS was probably a canny acquisition by Neverware.

Still in the development stage, whatever future is now in store for this little OS. it’s sure to be big.

With a spare USB stick Flint OS can turn just about any old PC into a Chromebook Sort of.

Still in the development stage, whatever future is now in store for this little OS. it's sure to be big.