The Internet can be a dangerous place, full of malicious hackers trying to take advantage of honest and innocent users. Hackers constantly pretend to be companies or websites they aren’t, attempting to fool you into clicking their deceiving links and giving them your personal information so your computer becomes a member of their robot army.

Even the most attentive Internet user can slip up by clicking something they’re not supposed to and end up in a world of pain. Even a simple lapse in installing vital Windows updates that fix flaws leveraged by hackers can wreak havoc.

That’s why anti-virus, or more accurately for 2017 – Internet security software, exists. Anti-virus programs sit in the background, valiantly monitoring your computer, on the hunt for activity that resembles something trying to ruin your day. It would be foolish not to have anti-virus software installed on your computer – just like you wouldn’t drive your car without wearing a seat-belt, you shouldn’t use the Internet without antivirus software.

Dedicated anti-virus software is obsolete though, right? Microsoft has one built-in to Windows – for free! Who better to protect your computer than Microsoft, who know the operating system inside out and have a vested interest in ensuring your Windows experience is not sullied with malware and viruses? Sorry to break it to you, but that hasn’t been the case for years. Windows Defender is the bare minimum in protection against Internet nasties.

In real-world detection tests from the respected AV-TEST outfit, ESET’s anti-virus software detected 98.80% of threats, whereas Windows Defender managed a paltry 88%, putting it amongst the worst performers. Windows Defender’s false alarms rate is much higher too.

In AV-Comparative’s March 2016 test, ESET didn’t present a single false alarm, yet Defender jumped the gun 13 times. Defender even has a higher impact on system performance.

Dedicated anti-virus software such as ESET Internet Security is not only better at basic protection, but offers levels of protection Windows Defender doesn’t, and never will. ESET implements various features to go the extra mile in protecting you online.

Thwarts attempts to acquire sensitive information such as usernames or passwords by fake websites masquerading as trustworthy ones.

A special secured browser through which you can safely pay online that protects you from keyloggers.

Monitors all the processes and applications running on your computer, to see which ones want to use your webcam. It alerts you to any that unexpectedly try to access your webcam, and lets you block them.

ESET is famous for having a small footprint that leaves more power to programs you use daily and extends the lifetime of hardware.

ESET’s Smart Security Premium offers more features than anyone serious about securing their computer even considers.

Lets you safely store and prefill your passwords to avoid password reuse and create strong passwords.

Encrypt files and removable media, such as USB keys so if someone does gain physical access to your data, they can’t do anything with it.

Helps you track and locate your laptop in case it goes missing because of a loss or theft. Mark a device as lost and it activates the webcam and takes screenshots to see who’s got it.

The easy navigation on the ESET Smart Security Premium makes it very easy to use, unlike other Internet security programs, which are slightly more complicated. 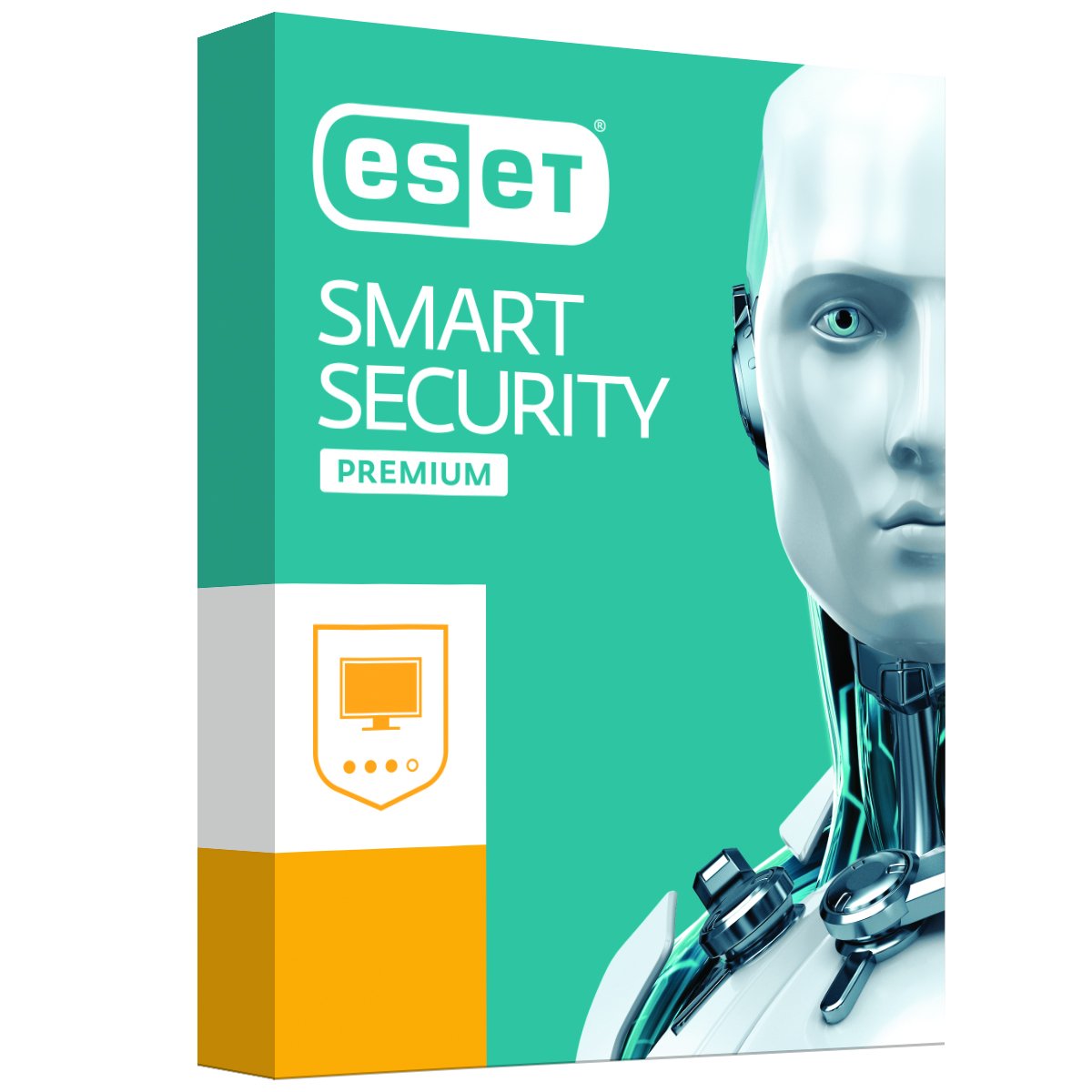 More Ways Than One To Protect

Aside from the usual scans the ESET Smart Security Premium provides, you can also isolate the scans to specific drivers so you can get to the root of the problem.

There is also a Gamer Mode feature, which optimizes the PC for gaming and presentation without causing any interruption.

Having been in the IT security industry for a quarter of a century now, ESET is one of the many household names when it comes to protecting your computer from malicious content on the Internet. ESET Smart Security Premium does just that with a host of features that will protect your PC and any data that you have stored online.

It provides great value for the Internet security services it provides.

Instead of having to use the manual CD that comes with it, you can also install the ESET Smart Security Premium via its website for a hassle-free installation process. All you need from the CD is the License Key, which will be provided. Installation is quick and easy and you can do it while having other programs up and running. After the installation process is complete, you’ll be redirected to the Smart Security Premium main page where you can setup your defenses.

Many Ways To Defend Your PC

With the Smart Security Premium, you can protect your passwords, home network and even your online banking and payments so there will be virtually no way someone can hack into your PC. It also comes with an anti-theft feature, which protects your PC in case it was to get stolen. There is also a Parental Control option if you’re using a home PC where your kids can get on them so you can protect them from harmful websites.

“The ESET Smart Security Premium is a great Internet security service that also provides great protection for your PC.” – Wi-Liam

We sat down with Nick FitzGerald, Senior Research Fellow at ESET to discuss the current threat landscape

What are the latest trends in the type of threats and vulnerabilities ESET works to prevent? Is there a particular type of malware in fashion right now?

Well, right when you asked, everybody was, and still is, talking about the WannaCryptor (aka WannaCry) ransomware worm. The reason WannaCryptor has received so much attention is that it combines one of the most common current forms of malware – ransomware – with fast-spreading network worm functionality. The worm also depended on an element of luck for its success. It used the so-called EternalBlue exploit from the recent Shadow Brokers leak of what are reputedly NSA hacking tools. EternalBlue exploits a vulnerability in a very old part of the Windows networking code that was present in all versions of Windows from at least Windows XP, and maybe even earlier.

Despite all this though, I don’t think that WannaCryptor is the beginning of a trend. The worm functionality of WannaCryptor has seriously jarred quite a number of people out of what may have been an element of complacency.

I strongly suspect that many network firewalls and other security perimeters and controls will have been checked a little more thoroughly than usual over the last few days.

How does ESET stay on top of the constant malware and virus threats that seem to constantly be popping up? It may be rather anti-climactic, but the answer is that it’s ’mostly done through automation’. The huge volume of samples of new malware and other “suspect” activity our products see and log is constantly being mined for interesting patterns and new developments. Of course, there are human researchers overseeing all this, as often their experience means they see things better or sooner than the automated systems. Further, human researchers oversee the testing and validation of new detection patterns and other technologies we deploy, either through the cloud or directly to the endpoint security software.

The new, possibly more challenging and interesting material tends to stick out like the proverbial “sore thumb”. Usually what follows is nothing like typical. Sometimes it takes thinking outside the square, such as how researchers thought to look for what turned out to be early IoT malware and such.

Do you have a favorite piece of malware? Something nasty, but you kinda admire the ingenuity of it?

Not that I’ll identify publicly! Seriously though, you do occasionally come across something whose elegance, or whose key ideas are so simple yet had not been thought of or tried before, gives you pause to admire the ingenuity or skill that resulted in this piece of malice being built. Mostly though, you just groan at the unending ordinariness of it all, or even have to laugh at the abject stupidity and you are left scratching your head wondering how many more errors and bugs would have been needed to render the code entirely useless, as opposed to its current state of nearuselessness.

When ESET detects a vulnerability, what is the typical time frame from when the issue is detected and a response is released to customers?

In the case that we become aware of vulnerabilities in our own products, we work as quickly as possible to remediate and release updates to fix the issue. As the complexity of vulnerabilities can vary greatly, it is very difficult to put a likely or typical timeframe on preparing and shipping such remediations, but in the few such cases since I have worked for ESET, our responses have been measured in days rather than weeks or longer timeframes. Further, it is often the case that we could ship detection updates to detect and block attempts to exploit such vulnerabilities, thus protecting our customers until we can ship a full repair.

In the case that we become aware of vulnerabilities in the products of others, we work to responsibly disclose the vulnerability to the affected vendor and assist them in re-mediating the vulnerability if they wish to work with us. Again, it is likely that we could ship detection updates for exploitation attempts to help protect our customers until the affected can ship an update to fix the issue.

WHAT ABOUT THE WANNACRY MALWARE SCARE?

Ransomware is an insidious piece of software that finds its way on to your computer the same way as malware (i.e: downloading a dodgy program via an email link, banner ad or app that misrepresents itself), but instead of turning your computer into a hacker’s slave, every single file is encrypted.

If you want your files unencrypted, you have to use Bitcoin (a relatively anonymous payment method) to pay the ransom and have your data released.

Luckily, ESET Internet Security includes Ransomware Shield. When Ransomware Shield is enabled, all executed applications are monitored and evaluated using behavioral and reputation based heuristics. When behavior that resembles ransomware is identified, such as trying to encrypt data unexpectedly, the process is blocked and you are notified of what’s going on. It’s not a total replacement for a solid backup of your important data, but another line of defense to ensure your normal activities are not disrupted.

“The ESET Smart Security Premium is a great Internet security service that also provides great protection for your PC.” - Wi-Liam

Add your review  |  Read reviews and comments
TNR earns Amazon affiliate commissions from qualifying purchases. You can support the site directly via Paypal donations ☕. Thank you!