Like Norse mythology’s Loki, Jonni Bidwell is a bit of a prankster and a mischief maker. He’s also quite simple, like Elementary OS Loki.

It’s been about a year and half since the last major Elementary OS release (Freya). That version, while a little rough around the edges (some of which were smoothed with a couple of point releases), showed immense progress and promise, so we were excited to see what this incarnation brings. For those unfamiliar with Elementary OS, it aims (and succeeds) to be pretty and easy to use. It’s even a little coy about the fact that it’s a Linux distro – its website describes it only as ‘a fast and open replacement for Windows and Mac OS’ – and it’s so simple your granny could use it. But Linux it is – hiding under that desktop veneer is Ubuntu 16.04, a welcome update to the previous 14.04 base, which is beginning to show its age. 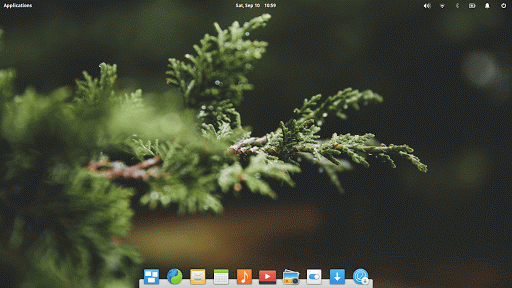 The Terminal gets a nice color scheme with this release, although Gentoo Linux has been doing this since 2003… [Show off! – ED]

In some ways our initial excitement was met with an anticlimax – it’s not that Loki is a worse release than Freya, and it’s not for any lack of tangible change, it’s just that we were expecting so much more. The Pantheon desktop still looks beautiful and runs slickly, there are some lovely wallpapers (but really), it’s easy to install, and comes with a good (if sparse) selection of preinstalled apps. Perhaps we’re being harsh, but it seems like many of the visible changes are merely catching up with other desktops, rather than being genuine innovations. The Applications menu search bar is improved (you can search by keywords, rather than just names), notifications are stored (Windows 10 style) and the volume applet can control playback for many music programs (like Mint 18).

One resounding criticism that has been addressed was the choice of Midori as the default web browser. It was prone to crashing and did not play nicely with some sites. Of course, users were free to install Chrome(ium) or Firefox, but these days one expects a decent browser out of the box. In Loki, the web browser is Gnome’s Epiphany, a more robust choice, but one which many users will still prefer to overrule. One criticism which hasn’t (and perhaps won’t) be addressed is the file manager’s simplicity. You can’t open multiple instances, precluding dragging files between windows, so expect to be copying and pasting more than usual. You only get three options: grid, list and multi column view. The latter makes things very Mac OS Finder-like.

Indeed, once you start looking, you begin seeing Mac-isms everywhere. Firstly, there’s the dock at the bottom of the desktop. Then, in the shortcut key configuration dialog, we find the Windows and Alt keys referred to by the command and option symbols one finds on Mac keyboards.

A clean install gives you 16 applications in this menu, exactly enough for one to spill over to page.

In general, everything looks modern and minimal, and the distro showcases some nice innovations. Its mail client, in particular, is a fork of the now-defunct Geary, which showed great promise before its demise. You can connect your email accounts and the rest of your online life to your desktop, although many will prefer not to. New software and updates are handled from the AppCenter, where libraries and technical gubbins are lumped together under the amorphous title ‘Operating System Updates’ to protect you from their scary names, presumably.

A stylish, easy-to-use distribution that’s easy to install and easy to use. It’s probably closer to Mac OS than any other Linux desktop, and that combined with the many instances of configuration being sacrificed in favor of simplicity, will likely put off many LXF readers. See also: EndlessOS, KaOS, Linux Mint.

Even if you despise the lack of configurability, there’s no denying it’s a good-looking desktop.

The Settings dialog has been rewritten and looks somewhere between that of Gnome and Mac OS.

» Continues its march towards being the premier pretty and simple distro. But you can’t right-click on the desktop.