Before we dive in to this, a few thoughts. This review is the first for a “non-systemd” Distro. I will not get into the aspects or controversies regarding systemd vs Init… suffice to say, both sides have some compelling arguments:

• The anti-systemd crowd concentrate on how systemD keeps growing the amount of things/process it runs/is involved with.

• The pro-systemd crowd points out how aging init was/is and how it needs to be updated to keep with the times.

[That is a very VERY generalized overview of the main arguments, For a more in-depth, google the info and read across the spectrum of articles] I do not review that low-level technical stuff, I concentrate more on what you see and interact with on a regular basis, as a general user. Read our DeVuan Linux Review.

Even though I have screenshots that show my laptop specs, I am including them in the text just in case the pictures lose resolution when enlarging them, or if you are reading a text only version of this review.

Remember, I ran this test by live booting a usb Flash drive and not by doing a minimal or Full install. Now, saying all that, my intro and my laptop specs, let’s get to my review, shall we? 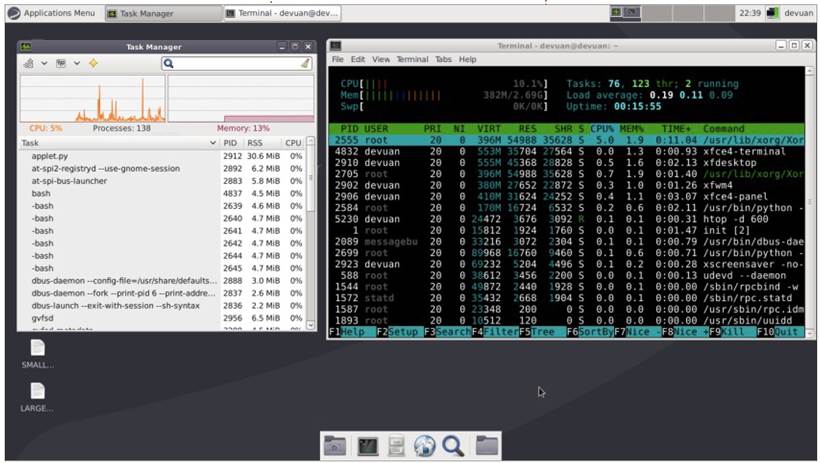 The First thing I noticed, and really liked, about DeVuan is how quickly it booted. Even booting on this “older” laptop, that has USB 2.0, it was less than 60 seconds from selecting to run it live and getting to a working desktop. If it boots that Fast live, I would assume it does so installed to a hard drive as well. So long as you don’t bog it down with tons of startup programs, that is. [Personally I tend to have as Few startup programs as possible. But you may be different, that’s alright! One nice thing about Linux, and many of us Linux users, is you set it up so it works For YOU!].

By default, DeVuan uses XFCE 4.0 For a desktop environment.

This was the First time I had ever really jumped in to this environment. While somewhat “plain” and “boxy” [reminded me of Windows 95/98/98SE and 2000], it worked well. It was quite Fast and light on resources as well. All that equals speed and usability! Based on the usage stats, XFCE will play nice on old hardware, and will be blazing Fast on new hardware.

Keep in mind, while XFCE is plain by default, it can be made to look prettier and Fancier! Unlike Gnome 3.x, and like KDE, by default, I could tweak just about anything my heart desired! From “boxy” windows to “rounded” windows, From Flat to 3D, From bland to shiny… all the options were available! For me, that is a huge plus!

I tested different interface settings, From plain to Fancy, and while the Fancier obviously used more resources, it never got to a point where XFCE seemed “heavy” or “resource hungry” [mind you, I would switch this or that, and have no programs running except neoFetch in a terminal and the system monitor. I used both so I could rate each one’s impact].

Mentioning that I could tweak what seemed like everything, there is a complaint here though. Some tweaks seemed to assume you knew what you were doing, that you had experience. I think, and this is a deficiency in many distros, that maybe, just maybe, some of the options should have tooltips available by default.

One HUGE example here. The panel. Now, in some environments, and in some distros, if you want to 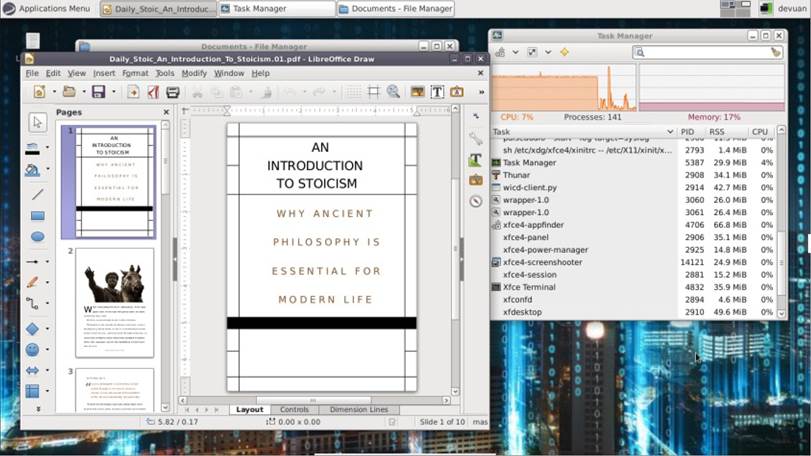 edit the panels, when you select “panel 1”; it highlights which panel you are working with. Not so in XFCE. Panel 1 is the top panel, panel 2 is the bottom, both are there by default. For me personally, this isn’t/wasn’t an issue, but For a newbie or less experienced user, it could cause a headache. I also noticed transparency did NOT work on the top panel. Didn’t matter if I set it to a solid color, or picture, or what… no transparency even though it was an option.

Going through the settings manager, most things worked well.

I did have an issue with my media keys on my laptop keyboard, and a mouse pad issue that we decided was a driver issue and not an XFCE or DeVaun issue – thanks @ Rob Shockley and @ BJ Steeves For the help with that. Being a “driver issue”, it’s logical to think that if I had installed to my hard drive, the problem would have been solved.

As to the settings manager itself. It was laid out pretty standard, pretty much like most are. It worked well also. When changing a setting it applied quickly. The exception to this is the wallpaper manager. It really sort of sucked! I mounted my hard drive, and attempted to browse my wallpaper collection but nothing showed up. Not a jpg [or jpeg] or png or webp… nothing! All I could do, From in the wallpaper manager in the Settings Manager, was browse and use the handful of built-in wallpapers. BUT if I opened Thunar [the File browser] and navigated to my wallpaper collection, I could right-click and set any picture to be my wallpaper.

For my other reviewed distros so Far, I didn’t need to go through those added steps. Makes me wonder how good DeVaun’s implementation oF wallpaper management is.

I mentioned the File manager, Thunar. It is lightweight yet powerful enough to get the job done! Even has a right-click – open in terminal option built in, enabled by default! That is a nice option, makes it a lot easier to edit things or open things via the command-line. You browse in the File manager, Find where you want to be, and then open it in the terminal. A lot less typing and possibly mistyping the directory/file path!

The terminal is standard. It’s XFCE’s implementation of bash. Sadly, regarding the terminal, like pop_OS, DeVaun Failed my “control-alt-t” test. [That being, when you click that key combo together, it’s nice to have the terminal open, like it does in Ubuntu and Linux Mint and KDE Neon.] Thankfully, it was Fairly easy to set up that hot key combo in the settings manager!

The programs on the live image were great! A nice large selection, with some handy extras! They had Firefox ESR [Extended Security Release], two photo/image viewers, GIMP, LibreOffice, and even WICD. [WICD is a more powerful WiFi management program, more powerful than the built-in one that is]. The large selection gives you a good idea of how various things can run on DeVaun. Speaking of running, I was delighted to discover mp3 and mp4 support built in! [Although I tested both in VLC, and not in the other two music players or other one video player. But, really, why use anything else when VLC can do it all? I’m just joking, use what works For you!]

DeVuan is in the “Debian” Family. That means any .deb File can be installed, and it uses apt For a package management system; it also has synaptic installed by default, which is nice! I mention this because, as I look at my ever growing list of distros to test (remember I am now taking requests), not all are in the Debian Family; a Few are in the Red Hat Family, and a Few in the Arch Family. So I plan on starting to mention that aspect as well.

Overall, DeVuan seems solid! XFCE4 as a DE is usable and easy to customize by default! [I can see why Linus Torvalds likes it!]. For some, the Fact it doesn’t use systemd is a huge plus as well. It’s use of XFCE makes it Fairly lightweight. Although, as you can see, sometimes the CPU tapped out at ~100%, usually when First opening a big program, like FireFox ESR or LibreOffice. My complaints about it are Few, and if you are looking For a non-systemd Distro, it’s worth checking out!

Jason M is old millenial who’s been an avid Linux user since Ubuntu Dapper Drake. He lives in Washington State, loves sports, and does plenty of geeky stuff like Ham Radio, web dev and these reviews!