With each new review, I am trying to add something that refines the review itself. If you have ideas, or requests for a Distro to be reviewed, please let me know.

Even though I have screenshots that show my laptop specs, I am including them in the text just in case the pictures lose resolution when enlarging them, or if you are reading a text only version of this review.

Remember I ran this test by live booting a USB flash drive and not by doing a minimal or full install. Now saying all that, my intro, and my laptop specs, let’s get to my review – shall we?

I was pretty excited about giving Bodhi Linux a test drive.

Many Linux people seem to think of it as an “up and coming Distro” [like Elementary Linux, which is next on my list]. After playing around with Bodhi, I can see why it has that label! 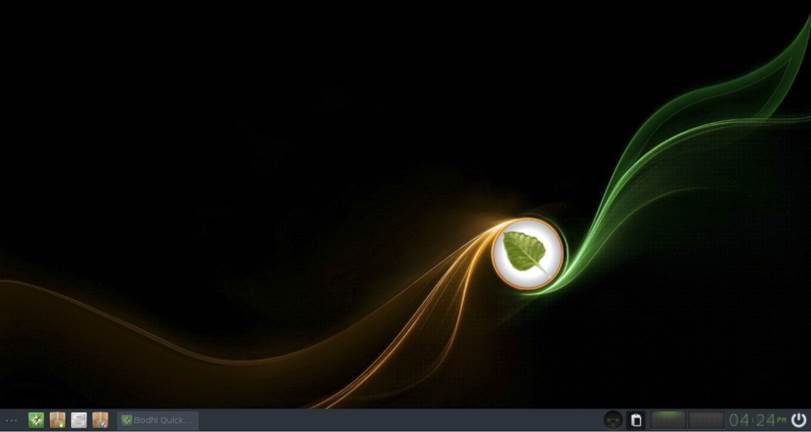 (quotes from their site will be in italics):

As you can see, Bodhi is lightweight. It has both a 32-bit and 64-bit version so it can run even on older hardware! They definitely get points for that – because many mainstream/well- known Distros have [or are in the process of] stopped releasing 32 bit versions.

Bodhi has a smaller team oF developers than many mainstream Distros, but, From what I can tell, they seem to be growing. That should increase their updates and Features, in theory at least.

Their windows manager is called moksha desktop [their own make or Fork oF enlightenment 17, as the team didn’t like the changes put Forth in E-18]. Reading their website, it seems they consider Moksha as part windows manager and part desktop environment [DE]. The idea here seems to be simplicity. That is good For older hardware, but I Found it a little too simple, restrictive almost.

I had to search For the settings to enable my WiFi. It was a supported chip but still took some tinkering to get it enabled and working. The reason it took some work, was the settings manager seemed scattered to me.

After digging around, I Found it and enabled my WiFi; yet once I got the chip “on”, I still had to manually give it my network name as it didn’t scan or show any local networks [there are many networks in and near my house].

Once I had it working and was online, I noticed that there was no indicator showing that I was online in the status/taskbar. What was worse is that I couldn’t Find an indicator For WiFi or network at all. To me that was a huge downside. I don’t get into the indicator overload that some people do, but I like the time, network, and a logout menu, in my bar, yet Moksha didn’t seem to want to let me see I was online. [Granted, I could always install a program like Conky and place a widget on my desktop, but For these reviews I don’t like installing non-deFault programs if I can help it].

Let’s go back to the settings manager For a moment. As I said, it was scattered, clunky even. Most settings use a vertical hierarchy.

The real issue I Found was some categories seemed to make no sense. Even worse, some options in categories made little sense. After tinkering and searching DuckDuckGo, I Found answers, but why not call a dock a dock, or even taskbar, like most other Distros do? They call it a “shelf” which is Fine – they want something all their own- but I Feel they should have kept some things with convention For new users.

I tried to change some

keybindings, and ran into issues there too. Yes, there were options, many of them that you could scroll through, but not many seemed to actually work. Granted, I didn’t have time to really dive into that, and I’d assume this or that command For this or that keybinding maybe conflicted with an existing one. Yet I also never got a notice saying as much, so maybe not?

Okay, so my worst complaints are now done, let’s talk about some of the good points, shall we? The default theme is easy on the eyes and looks really slick! The colors compliment each other nicely, and the look and Feel Flows together very well! Moksha has “built in” compositing which allows For Fancy, smooth graphics and looks – while still being light on resources. They really did a nice job with this department, as good as LXQT has done [see my Lubuntu review For my thoughts on that].

A nice Feature is the left-click menu on the desktop. It’s powerful! The initial options are standard, but the nicest aspect is the Favorites menu that gets populated as you use apps. To pull up that menu, you use a left-click instead of right. That provides a quick-launch Functionality For your most-used apps. IF you are using an external mouse, and if you center- click [click the mouse wheel], it pulls up a windows menu. So three menus in one – sort of. Nicely done indeed!

I mentioned how Bodhi is “light on resources”. Out of my 5 reviews thus Far, Bodhi comes in 1st place For resource use. I tried to lock it up, opening various apps at the same time, playing music in my browser, moving my mouse, etc. Yet it was hard to get it to lock up. Hard but not impossible. Playing media put a little drag, but then again that is no real surprise. Opening photos and ODTs and PDFs, and launching my browser, caused no discernible lag. Knowing the developers aim For lightweight, I think they really succeeded!

There was only a small selection of apps included. But the apps 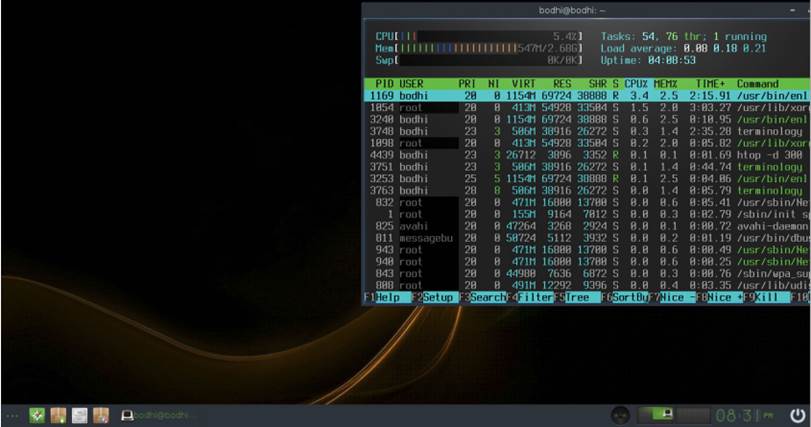 were pretty standard. A browser, LibreOffice, photo viewer, and File manager. No media player though, so I couldn’t test MP3 or MP4 support. I Felt that they could have included a Few more apps and still maintained their lightweight status.

Being built on Ubuntu, which is built on Debian, Bodhi uses the “apt” package manager. Their AppCenter didn’t impress me. But there was also Synaptic and of course the command line! Snap and Flatpak support can be easily enabled as well.

While there were things that I really didn’t like in Bodhi, overall I was okay with it. I can definitely tell what their goals are, and they are making progress towards said goals. IF I had old hardware, and or a 32-bit machine, I would consider Bodhi. On more modern hardware though, I probably would give it a pass in Favor of a more mature Distro, with more options. That being said, it’s not a bad Distro by any means. It is eloquent and resource Friendly, which are both good things!

Jason M is old millenial who’s been an avid Linux user since Ubuntu Dapper Drake. He lives in Washington State, loves sports, and does plenty oF geeky stuFF like Ham Radio, web dev and these reviews!