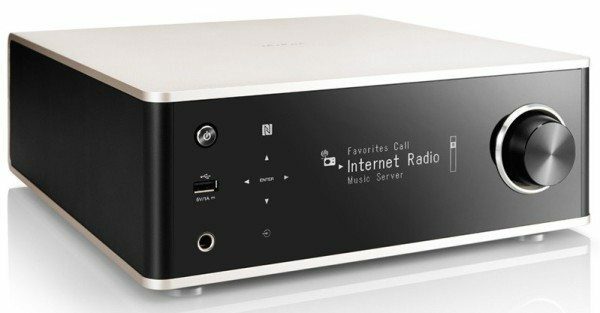 Expanding its Design Series, Denon adds an all-in-one network receiver to the stylish lineup, and Andrew Everard is impressed

Tested Denon’s PMA-50 – the company’s compact amplifier – always had the promise to be the start of something big. Building on the technology of the DA-300USB DAC, it added in amplification and a sleek look combining a gloss black main body with aluminium top and bottom plates, plus a novel design with revolving main display to allow it to be used horizontally or vertically.

It turns out something big was definitely in the offing from this small beginning: the arrival of a whole new Design Series, with the addition of the matching DCD-50 CD player back at the beginning of June. Shown alongside these two was a bigger version of Denon’s smaller products, if you see what I mean: the DRA-100 network stereo receiver takes the ‘-50’ design and applies it to a slightly larger product, packing not only onboard amplification but also network streaming, Spotify Connect, AirPlay and Bluetooth, along with USB connectivity for memory devices, phones and tablets.

Go small and then get bigger? Well, it’s worked for BMW’s Mini brand, so why not for Denon? And anyway, the DRA-100 is hardly a porker, while the use of cool-running digital amplification means it’s easy to slip into relatively small spaces, even if it can’t do that neat ‘use it on end’ trick of the smaller ‘-50’ models.
The fascia is simple, with nothing more than the volume control, power/standby switch and sockets for USB and headphones, the majority of the space available being taken up with the excellent Clear View OLED display. This shows track and title info in a large enough font to be read across the room when using it with the remote, which is unadventurous in its design but benefits from large, clearly labelled buttons.

There is an alternative: provided the system is connected to your home network (if it isn’t, it defeats the purpose of the DRA-100!), you can use the excellent Denon Hi-Fi Remote App. Available for both Apple iOS and Android platforms, it allows all the obvious stuff to be accessed – input selection, volume, tone/balance (complete with ‘source direct’ bypass) and so on – and also accesses network music browsing and playlisting, Spotify, internet radio and the like.
It’s not always a given that such apps will be the last word in slickness or reliability, and having reviewed a lot of equipment of this kind I’m quite used to the ‘kill app, reboot hardware and start again’ routine, but it is not only fast and reliable, even when scrolling through huge music libraries on a NAS, but also has nice touches such as instant access to the online manual and a quick clickthrough to Denon support should you get stuck.

When playing from a NAS or computer over the network, it allows you to play either tracks or whole albums by adding them to a play queue, but scores over similar software out there by loading the data from the server when it connects, thus allowing rapid scrolling through even large libraries by album, artist etc. It takes a few moments to load the library, but after that there’s none of the painstaking page-by-page loading through, which some apps choose to put the user through. It makes connected music playback fast and simple: it’s not quite the slickest network music app out there, but it gets pretty close.

However, what may seem like a glaring omission when it comes to connectivity is the lack of an asynchronous USB input for a direct connection to a computer, but then that’s not what the Denon is about: this is designed as a network receiver, and so will stream content up to 24-bit/192kHz, plus DSD64/128 (2.8/5.6MHz) over both its Ethernet connection and the front-panel USB. The system also has built-in wi-fi, complete with twin antennae – also used for AirPlay and Bluetooth – but I wouldn’t suggest you push your luck with just a wireless connection if you’re going to play hi-res files. That’s not about sound, but reliability – you’re likely to get a lot of dropouts with big files and wireless.

The DRA-100 also has two optical digital inputs and one coaxial, plus two sets of analogue ins, while alongside the speaker terminals there’s also a pair of audio outs, switchable between fixed and variable-level operation, a mono subwoofer out and a headphone output, which has a three-position gain setting to cope with tricky loads.

Under the skin, the Denon uses inhouse Advanced AL32 Processing, which endeavours to give a smoother sound by expanding 16-bit music formats to 32-bit before digital-to-analogue conversion, and also a proprietary master clock design. DDFA (Direct Digital Feedback Amplifier) architecture from CSR, which was recently snapped up by hi-tech giant Qualcomm, is used to deliver an output quoted as 35W per channel into 8ohm, or double that into a 4ohm load.

Using a discrete construction for the output stage in the quest for better signal to noise and lower distortion than rival Class D amplifiers, DDFA uses a fast, high-accuracy digital feedback loop, and is able to combine the functions of DAC, DSP equaliser, preamp and power amp. The DRA-100 isn’t the first Denon product to use this scalable architecture, which was designed for outputs of 20-250W, stereo and multi-channel applications, and used in everything from speaker docks to hi-fi amps and AV receivers: DDFA is also at the heart of the PMA-50 amplifier. 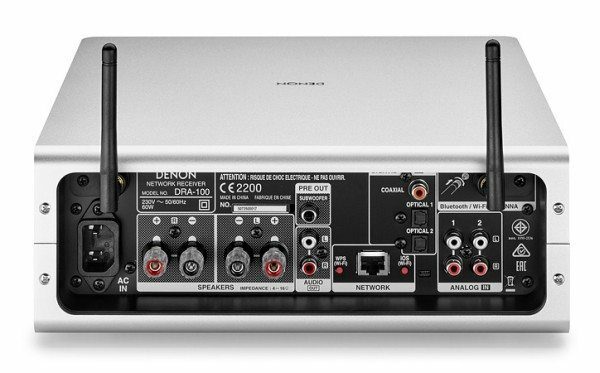 Initial impressions of the DRA-100 aren’t favourable: it takes a few hours from ‘cold’ to hit its stride, and sounds a bit thin and uninvolving while doing so, which has me worried that its output is actually a bit on the feeble side. A quick read of the online manual reveals that, as a default, its maximum output is limited to -30dB (or as the manual puts it, 30dB down from ‘full throttle’): there’s also an option to set this to -15dB, or turn this limit off completely.

Having turned it off completely, and also switched out the tone controls using the ‘source direct’ option, it suddenly sounds a lot healthier, and as it runs for a day or so the sound warms up and fills out. Yes, I know it shouldn’t, what with this being digital amplification and all, but it does, and by the beginning of the second day of use the system sounds both bigger and richer, and loses the bright and splashy treble it displays straight from the box.

Once in its stride, this proves to be quite a remarkable little amplifier, fully able to drive some fairly ambitious speakers to very good effect. As well as the Neat Iotas I use as my desktop speakers, and Monitor Audio’s Bronze 2, the Denon is also used into a pair of PMC GB1 floorstanders. Past experience with the company’s little D-M series micro components suggests it should be more than capable of handling the GB1s – and it is, delivering a big, bold, room-filling sound and only hardening up a little when pushed really hard. Even then the effect rolls in progressively and in a fairly benign manner – too many amps do well until the point where things suddenly go horribly wrong, but no such problems here.

Play something hard-driving, such as a 24-bit/96kHz download of Keith Richards’ Heartstopper (from Crosseyed Heart), and the Denon is clearly playing things slightly safe with its refined, warm sound; however, there’s excellent intelligibility – no bad thing, given the slightly rough vocals – and the music motors along appealingly. Yes, the track has a little more to give in terms of instrumental detail, but it’s hard not to like the way the DRA-100 plays this or the shambolic Blues In The Morning later on the album.

Treat it to a warmer, cleaner recording and the Denon is clearly in its element, cruising through the relatively undemanding noodling of David Gilmour’s Rattle That Lock set, also in 24/96 while still delivering fine vocal and instrumental textures. It’s not a sound to set the world on fire – but then that’s also the case with the album itself – but rather a presentation able to do anything you ask of it: decent bass weight and definition, plenty of detail to capture the attention, but an overall sense of easygoing smoothness and refinement.

Of course, this balance means it’s superbly well suited to high-quality recordings of jazz or classical music, with a lovely presence and three-dimensionality to Gary Cooper’s set of Bach keyboard concertos (on Et’cetera) in DSD64: the solo instrument is clearly focused and has a suitably percussive sound, while the interplay of the splendidly named B’Rock Orchestra is delivered with both detail and real rhythmic punch.

What’s more, the DRA-100 is more than capable of showing the gains in space and presence available when stepping up from 2.8MHz DSD to 5.6MHz: despite that overall warmth and smoothness, comparing tracks from the Trondheim Soloists’ recording of Brittten’s Simple Symphony in both formats shows just a shade more of the exceptional ambience customarily available from recording company 2L’s releases to be apparent in the 5.6MHz version.

By any standards the Denon DRA-100 is a fine-sounding amplifier, well suited to use with a wide range of speakers; that it also offers so much in terms of functionality makes it an even more compelling buy.