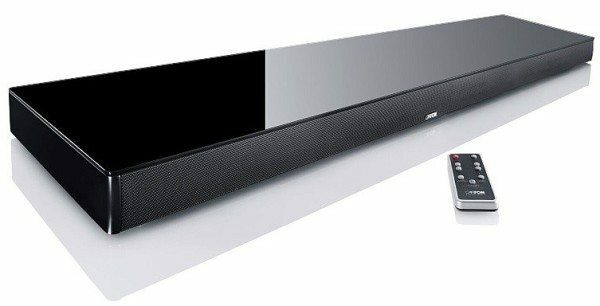 All soundbases pretend they’re ready for the task of doubling up as a plinth for your flatscreen TV, yet some tend to be quite narrow, making them inelegant – and sometimes impractical – partners for larger-sized screens. The introduction of Canton’s lengthy DM100 is therefore a welcome move.

This successor to the previously released (and well-reviewed) DM50 and DM75 models is 1m wide and 33cm deep. This makes it well-suited to screens of 46in and above. In fact, my Samsung UE46F8000 TV looks perfect on it, with the curved stand reflecting slightly in the Canton’s gorgeous black glass top (it’s also available in silver). You can, of course, use the DM100 with a 55in or even 65in screen. Note that it’s rated to accommodate loads of up to 40kg.
Canton’s DM100 isn’t just a larger version of the more junior models with more drivers – two tweeters, four midrange and four bass drivers – and more power (200W). It introduces several new features, including a Voice sound setting to boost dialogue clarity, automatic selection of Bluetooth input, and an IR delete function for the removal of unwanted remote control commands.
Legacy features include the 2.1-channel output, adjustable lip sync, dynamic range control, compatibility with most TV remote controls and the same roster of sockets: one each of stereo phonos, optical and coaxial inputs. So no HDMI, and while those digital inputs can handle Dolby Digital, DTS isn’t supported. For the simplest hookup, use your TV as a hub, feeding the DM100 via optical.
For operation, the Canton provides no onscreen display, just a three-character LED hidden behind the grille. This isn’t exactly ideal because most of the time you just get a brief indication confirming a change in source, etc, plus a single light to indicate standby or full power.
The candy bar-sized remote control is nicely weighted and has good, rubberised buttons that respond well when pressed. It’s not backlit, though, and you’re required to scroll through inputs. Still, at least you can tweak the volume easily enough and make quick adjustments to the bass and treble.
Kicking off with some music streaming, the DM100’s apt-X Bluetooth mode proves highly adept at serving up an impressively wide dynamic range. The ridiculously deep bass in L$D by A$AP Rocky causes some reverberation and the bass in Martin Garrix’s Animals isn’t buttery smooth but does have terrific kick. With James Bay’s Hold Back The River, imaging is a bit narrow (despite the soundbase’s considerable width) yet the soundfield is wonderfully coherent; the raspy vocals and snare drum don’t project too far forward in the mix. Fully-orchestrated classical music shows off the DM100’s talent for detail retrieval and its ability to go loud, with a hi-res download of Mozart’s Violin Concerto No. 4 in D Major sounding highly polished and balanced through the registers.
The ‘base really gets going with TV dramas and movie soundtracks. Bored to Death (Sky Atlantic) shows its panache with subtle effects, such as when Jonathan cocks a gun, slams a door, sprints and slides on a gravelly pavement. Dialogue is excellent, courtesy of a robust mid-range, and everything again sounds nicely balanced.
Things get even better with Blu-rays. Via the DM100, The Expendables 3 becomes an absolute assault on the senses with guns firing, bullets pinging, bells ringing, helicopter blades whirring, train carriages rattling and more. The soundbase presents this sonic storm with assurance and clarity, so that you’re aware of each effect without feeling overwhelmed. Consequently you feel fully engaged with the movie.
As with streamed music, the bass can be a but unruly at times – when Sly Stallone remotely blows up his own helicopter I hoped for a smooth LF tidal wave washing over me, but got something less distinct – and even the dedicated Voice mode doesn’t reach down far enough to give any extra clarity to Sly’s ultra-low oscillations.
Fantastic Mr Fox’s soundtrack, which is less extreme, is a sheer delight. Dialogue is spot on and soundtrack details – a throaty car exhaust, a ticking watch, a strummed guitar – are an exquisite pleasure to hear. The DM100 does utter justice to the carefully crafted mix.
So Canton’s wideboy soundbase is highly impressive. It makes a worthy rival to Philips’ £450 pancake-fl at Fidelio XS1, which offers HDMI connectivity and a separate subwoofer (which could be a double-edge sword), but measures only 70cm wide. To find another soundbase with this much top-plate real estate you would need to consider Focal’s Dimension, which is nearly twice as expensive.
Easy to use and sounding as good as it looks, the excellent DM100 proves that Canton is still setting the soundbase agenda.
DRIVE UNITS: 2 x 0.75in tweeters; 4 x 2in midrange drivers; 4 x 4in bass driversCONNECTIONS: 1 x optical audio input; 1 x coaxial audio input; analogue stereo phono inputs; subwoofer outputDIMENSIONS: 1,000(w) x 69(h) x 330(d)mmFEATURES: apt-X Bluetooth; adjustable lip-sync; DTS TruSurround; Dolby Digital; can be controlled from existing TV remote control; Voice sound setting to boost dialogue clarity; Eco mode; IR delete function.