We’re big fans of Ethernet here at PCPP, as Wi-Fi tends to be flakier than a leper with dandruff.

As more devices get loaded onto a Wi-Fi network, and nearby networks encroach on your radio waves, we’ve seen supposedly high-power devices fail over a range of less than ten metres. D-Link’s new Taipan router aims to solve these problems by blasting out one of the fastest Wi-Fi networks ever offered to consumers. The question is -does it work?

The AC3200 designation indicates that this thing can churn out 3200Mbps of bandwidth – that’s the equivalent bandwidth of three combined Gigabit Ethernet networks. As usual though, the devil is in the details. The Taipan actually pumps out three different networks – one on the 2.4GHz band with a speed of 600Mbps, and two on the 5GHz band, each with a speed of 1300Mbps. Add these up, and you get 3200. What this means is that no single device on the Wi-Fi network will get more than 1300Mbps of bandwidth; but it also means that more devices can connect to each of the three different networks without slowing down overall performance. 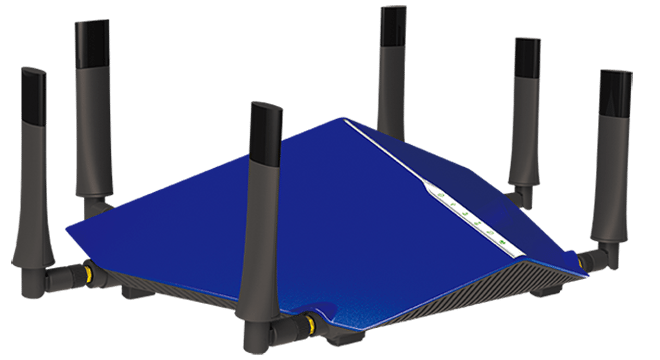 As you can see from the photo, this rather odd-looking router has six positional antennae, and these are used to deliver AC SmartBeam technology. Rather than blast the signal in all directions, it can detect where your devices are, and then direct the signal using the various antennae, even if the device is moving. Unlike most highspeed routers, D-Link has included an ADSL2+ modem inside the Taipan, which is a fantastic inclusion for the millions of Aussies stuck on this copper-based tech until the NBN rolls around. It’ll still handle Fibre-to-the-Home NBN as well, as tested in our environment

Heading into the interface reveals D-Link’s superb user interface. It really is a favorite of ours, with just the basics revealed for casual users, yet advanced options are just a click away. The USB 3.0 port on the rear, next to another 2.0 port allows the connection of a USB 3.0 drive, turning this into a NAS, while four Gigabit Ethernet ports are standard.

So just how fast is this thing? That really depends – while we tested it, our lab is in an inner-city suburb with around 15 other Wi-Fi networks within range. There’s also the fact that our test laptop has a 2×2 receiver – to get maximum speed on the 5GHz channel requires a 4×4 receiver, and these are still extremely rare. We recorded a speed of 427Mbps on the 5GHz channel, placing it in the same league as ASRock’s new G10, which is also a 4×4 transmitter that is damn fast Obviously there’s plenty of spare bandwidth to go around, but unless you’re connecting more than five devices simultaneously, you’re probably not going to max out the Taipan. Finally, if you don’t need the modem included in this unit, D-Link’s DIR-890L/R offers basically the same performance and features for $350, which is a considerable saving.

Rather than blast the signal in all directions, it can detect where your devices are, and then direct the signal

Whether you’re loading this up with lots of devices, or have an eye on future performance, the Taipan bites just right