Getting a sound boost on a PC used to be invasive – requiring you to buy and install a sound card to get the best audio from your PC. Portable DACs and amplifiers have made it easier, but console gamers haven’t always been so lucky. But that’s a problem Creative’s new Sound BlasterX G6 hopes to solve. Read our Sound BlasterX G6 Review. 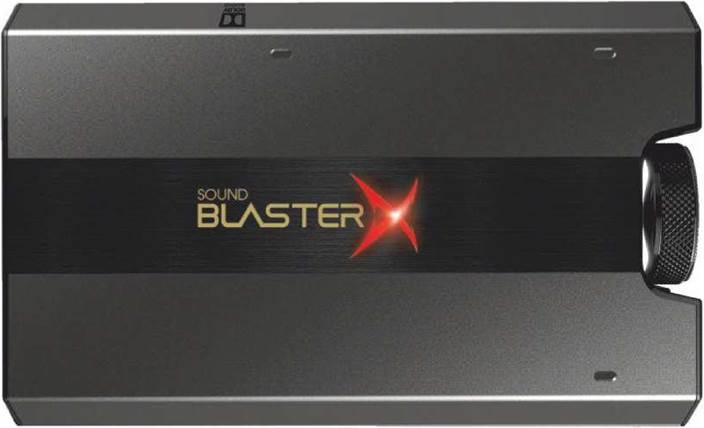 Somewhere in between an external sound card, amplifier and an exceptional DAC, the G6 is anything but a one-trick pony. Creative has made it versatile enough to work with Windows, the PlayStation 4, Xbox One and even the Nintendo Switch.

The G6 is the successor to the G5, but also carries the legacy of the E5, a mini-amp that worked wonders with both PCs and mobile devices. With a 130dB and 32-bit/384kHz DAC, plus support for Dolby Digital decoding and 5.1 and 7.1 virtual surround sound, there’s a lot under this small hood.

The device is only a little bigger than a deck of cards, so it doesn’t need a lot of space, although cables need to be plugged in at both ends. While small and simple, the G6 isn’t clutter-free.

The chief advantage of a device like the G6 is compatibility on both ends. The PC or console side is one thing, but because it’ll work with any pair of headphones you won’t need to buy a dedicated gaming headset. There’s a lot of technical stuff going on to make this happen, and it’s not that important to recognise how it works – the fact it consistently does is good enough.

In effect, the G6 amplifies the left and right channels individually using discrete components that boost and clarify the audio output. Standard headphone amps do both channels at once, which is fine for music but not for games that have separate signals going to each ear.

The G6 needs a constant power source throughout, which comes via the micro-USB port on one end. An optical input and output is on one side, with a headphone jack and microphone jack on the other, flanking a volume knob. Along one edge you’ll find the Scout/Direct Mode button, an SBX button, a headphone gain switch and LEDs for the headphone indicators.

In the box, Creative includes a micro-USB cable and optical cable to facilitate the key connections. We would’ve liked a longer optical cable for console setups because, as is, it doesn’t cover that much ground. There’s also no power supply for the USB-A side to plug into a wall.

You don’t have to be an audiophile to get the G6 up and running as there’s no calibration to speak of.

We tried it first on a games console, where we connected the 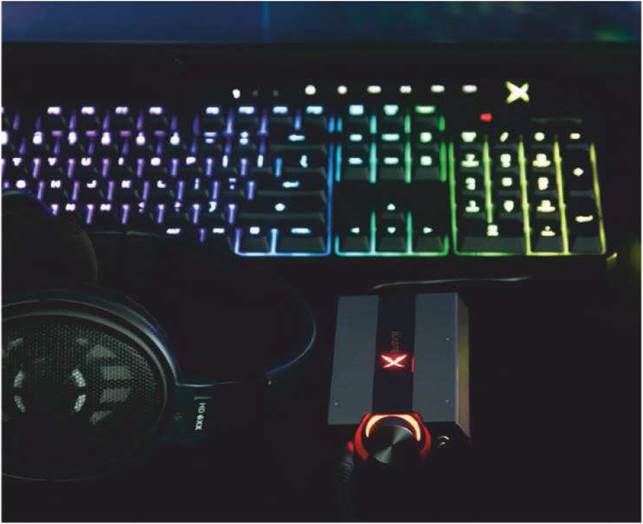 optical cable to the port in the back and one of the USB ports in the front. After plugging in a pair of headphones and starting up the console, we eventually got audio to come through.

On a PC, it’s a little different because of the Sound Blaster Connect desktop app, which offers greater customisation. It would’ve been nice to carry some of the settings from the PC to the console however, because the G6 doesn’t have internal memory to store settings like that, and you won’t be

able to replicate any of the custom features when playing on a console.

You’ll notice an immediate audio boost once you fire up the G6 – thanks, especially, to a Creative technology called Scout Mode that enhances the ambient noises and not only add some character to a game, but also help determine a course of action. Footsteps or voices come through a little clearer and louder, offering a tactical advantage when moving or hiding to avoid and ambush enemies – and all of that is done without also cranking up the volume.

But if you want, you can boost it by switching the gain from low to high, amplifying all audio coming through the headphones. In Wolfenstein II, for instance, this helped tip us off when an enemy was moving closer without having to have eyes on them.

SBX Mode also impresses – it feels like having a surround system between your ears. This mode not only amplifies things further, but adds spatial audio enhancements to simulate a wider soundstage.

You can never fully replicate what multiple physical speakers can do. Instead, Creative has tried to simulate the experience, and the results are easy to like. We not only heard footsteps, gunshots, voices and other sounds, we also knew precisely where they came from.

Nevertheless, it’s an acquired taste. The algorithms, as good as they are, don’t necessarily adjust volume levels for different sounds. For instance, you may be in a quiet area in a game, only for the music to jolt your ears once something dramatic happens. That’s not entirely Creative’s fault, since they don’t engineer the games, but some additional work would be good there.

We tried different headphones to gauge any differences, concluding that quality helps get more out of the audio amplification. That’s probably stating the obvious, but

the good news is that even old gaming headphones will feel like they got a new lease of life.

The Sound BlasterX G6 isn't cheap and its focus is somewhat narrow, but if sound matters to you, you're guaranteed a boost here without having to invasively tinker with anything. Unfortunately, you'll have a tougher time applying this to other use cases outside gaming: Yes, you can plug this in directly to a TV's optical input - that way, you could watch movies and shows with a 3D audio effect - but you'll need longer cables to pull that off if you're leaning back on the couch. We had fun with the G6 and recommend it first to gamers looking to boost sound quality and gain a competitive edge. For anything else, Creative and other sound companies of its ilk probably have something better suited. A great, but pricy, way to boost sound when PC gaming - for other uses look elsewhere.