Bliss OS 7.2 Review – Still mourning 2017’s demise of Remix OS, John Knight explores what else the world of desktop Android might have to offer… 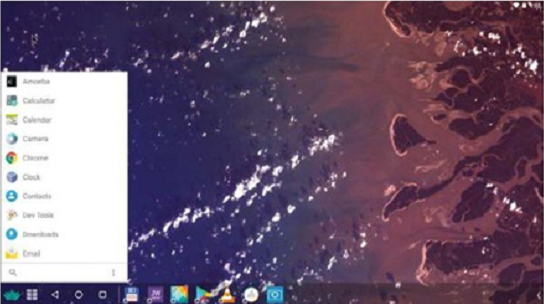 Based on Android Nougat, Bliss OS is designed to run across all your tablets, phones, and PCs. with a choice of optimised interfaces: Pixel for phones and tablets, or Taskbar for PCs and laptops. Taskbar provides a pleasing desktop interface that should be familiar to PC users. Support for some niche hardware is impressive with builds existing even for Pine64.

BlissOS is an ambitious Android-based project that aims to “bring the Open Source community a quality OS that can run as a daily driver, syncing your apps, settings and customisations across all platforms you run Bliss on”

Team Bliss writes that it will run on most Intel/x86 PCs. tablets, and laptops, most Android tablets and most Android phones.

There are numerous versions available to download for free straight from the project’s front page. We tested the latest stable release of the x86 64-bit edition for PCs and laptops, based on Android 7.1.2 Nougat.

Around this point you will encounter an error message about a service stopping. Get used to it. because it’ll be your first of many. These continual crash messages are the Achilles’ Heel of Bliss OS and knock off a lot of shine, especially because the “crashed” application is usually still running.

Once inside Bliss you’ll be given a choice of Pixel, which gives a conventional Android interface with desktop icons, or Taskbar. Taskbar is what you want for a PC. as it provides something akin to a Windows-style taskbar, but cleverly groups your apps in the main menu. As Team Bliss is keen to point out. by using Substratum. Bliss OS also comes with theme support straight out of the box with no need for system rooting.

Any running apps can be pinned to the taskbar, which gives you an excellent way of quickly accessing your favourite apps. Between the start menu and pinned app icons, this is a lovely and efficient way of using Android as a desktop, and becomes genuinely endearing.

Performance on our old Chromebook was respectable and VideoLAN was even playing HD Matroska files smoothly and tear-free. Unlike Remix OS. power management worked perfectly. And once those error messages were out of the way. browsing Google Ray was a joy that almost felt tailor made for the machine.

However, desktop Android – and therefore Bliss OS – is still hindered by its phone/tablet underpinnings. Many applications will want to run full-screen in the wrong

orientation, although Bliss often manages to avoid this with clever window manager workarounds (having said this, some stress testing of the interface did once banish us to broken GUI land).

Although Android purports to support both x86 and ARM. some apps have obviously been written only for ARM and simply don’t run. Furthermore, whether or not Bliss/Android will actually run on your hardware seems to be something of a lottery.

And although not a hindrance to all Android distros. Bliss still uses the old version of Grub. If you’re dual-booting with Linux, modem distros probably won’t detect Bliss and integrate it into your boot menu, leaving you to do so manually. Not fun.

Nevertheless, if you’re willing to persevere, a dual-boot setup between desktop Android and Linux is a very rewarding experience that gives powerful new functionality to PC hardware. Should that experience be through Bliss OS depends on whether or not you can work past its current bugs – particularly those crash messages. After some cleaning up. Bliss OS on PC should be quite a nice experience.

Innovative and worth exploring, but too buggy and immature to recommend just yet Future releases will be more solid..

Innovative and worth exploring, but too buggy and immature to recommend just yet Future releases will be more solid..