We look at some mobile protection this week

There are now several billion active Android devices around the world.

Most are either smartphones or tablets, with a smaller percentage being things like Android TV devices or some other console- esque items of technology. In terms of OS coverage, Android accounts for 82.8% of the global market, which is pretty significant.

Therefore, a number this large isn’t going to be overlooked by those who relish in exploiting the security vulnerabilities that will inevitably be present, no matter how updated the system appears to be. Gone are the days when viruses, digital theft and privacy were exclusive only to the PC; these days, the mobile criminal is well and truly active.

Most of the time, an Android device, used for just calls or texts, is relatively secure. But once you start installing all manner of apps, games and so on, the security levels drop significantly. A recent study has shown that of over 800,000 free Android apps analysed, 35% can access a user’s location, while almost 3% can leak email addresses, 5% can locate and open photos on users’ phones and 10% can read contact lists. Scary stuff indeed.

Bitdefender To The Rescue

The security experts at Bitdefender have been busy updating the company’s first line of defence for mobile users: Bitdefender Mobile Security and Antivirus.

Within the app, you’ll get four main areas of protection: a Malware Scanner, a Privacy Advisor, Web Security and an Anti-Theft element. And there’s an extra element that connects to a smartwatch.

The Malware Scanner has been independently tested to detect, as Bitdefender put it, “100% of the bad stuff”. It automatically scans the apps as you install them to locate anything untoward, and issues a warning should something come up that’s in line with the latest signatures as released through the Bitdefender cloud. This means it’s constantly up to date and works in the background to keep you protected.

The Privacy Advisor works by monitoring the activity and behaviour of the installed apps on your device. Should one of them suddenly decide to leak your contacts list to an unknown location, the advisor kicks into action and displays the errant app. 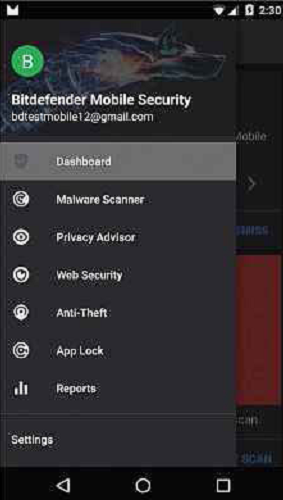 A safe mobile makes for a happy user 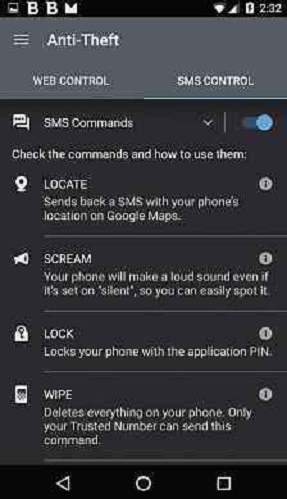 The anti-theft feature is excellent 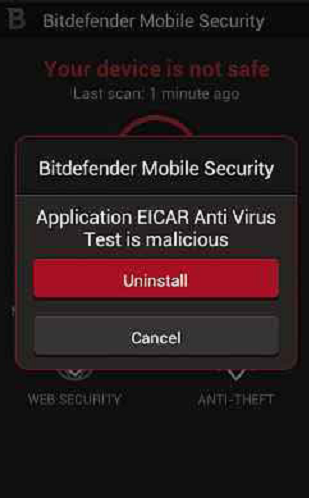 Bitdefender monitors your apps, connection and everything else

Web Security works in much the same way as a traditional online protection tool works on your PC. As you browse the internet on your Android device, it actively monitors the site you’re accessing and keeps away the nasties, as well as helping you to avoid those sites that are designed to foul up your phone.

The anti-theft function is very a cool feature. It uses a web-based dashboard that will allow you to send SMS commands, lock, geo-locate, sound an alarm and wipe your Android from any internet-connected device, should you ever misplace it or have it taken from you. It also allows you to listen in on your phone, alerts you if the SIM card has been changed and allows you to password protect your settings. It’s quite a well- featured part of the protection suite and is an impressive selling point in itself, regardless of the other advantages this app offers.

Unfortunately, we need to take mobile security seriously, which is a sorry state of affairs really, so what better then to install an all-encompassing security suite from the people who create protection suites for a living?

Features At A Glance