Plenty of features and a neat design with great performance, but the price makes this kit hard to justify over the competition

MESH WIRELESS NETWORKING systems make a lot of sense for most people, giving a way to upgrade wireless performance without having to replace your router. The latest to get in on the act is Asus, with its Lyra system.

As with the main competition, Lyra consists of three discs that you can place around your house to expand coverage into any black spots that you might have. Each Lyra access point can be placed flat on its feet, or you can wall-mount them, which may be easier if you want to place the access points in a hallway or just out of the way in a room.

Every access point has dual Gigabit Ethernet ports, which is handy if you want to plug a couple of devices into each access point.

That’s far more flexible than the BT Whole Home Wi-Fi (Shopper 358), where each disc has a single Ethernet port. Only one Lyra access point needs to be wired in, and you have a choice of installation modes. By default, the Lyra hooks into your main network, leaving your existing router alone.

Alternatively, you can change the mode of the router to PPPoE, so you can connect it to 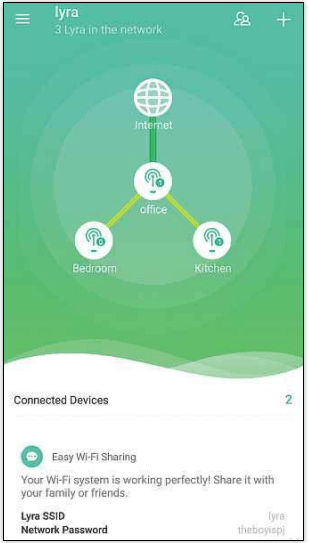 a modem and replace your existing router. Annoyingly, you can only change modes via the web interface, not the app, which you need for installation. In other words, you have to install the system first, then you can sort out replacing your router.

For BT YouView users, the system doesn’t support IGMP proxying, so you can’t watch streamed channels such as BT Sport.

Following the simple instructions in the Lyra app (for Android and iOS), you simply place the other access points around your home. These connect to the first access point wirelessly, building up the mesh network.

As with similar products, the Lyra creates its own network and dishes out its own IP address to connecting devices. There’s no option to change the DHCP address range that’s given out via the app, although you can change the range using the web interface. It’s slightly frustrating that the web interface has more features than the app.

A downside of this system with an existing router is that you end up with a situation where you’re using double Network Address Translation (NAT): once on the Lyra system and once on your main router. This can make configuring port forwarding on some devices a little trickier; if you can, replace your existing router to simplify matters.

The benefit of the way that the Lyra works is that additional services can be baked into the network. As with Google Home, Lyra lets you create user profiles for your family. Each profile lets you assign that person’s devices. For example, you could have your child’s laptop and phone listed under them.

Using these profiles, you can pause an individual’s internet connection, schedule when they can and can’t go online, and add web filtering to block unsuitable content. It’s a great implementation and makes the Lyra a flexible way to control what your family can and cannot do.

Asus also provides a guest network via the Lyra, so visitors can access the internet but can’t see your other devices. This means you can also give internet access without having to dish out your main network password.

AirProtection, powered by Trend Micro, can actively block malicious sites and prevent infected machines from sending information back to the cyber criminals. It’s a neat additional layer of security to add to your existing internet security software.

Speed and range are the most important aspects of a wireless mesh system. With the Lyra, each access point has a tri-band radio inside, with two 867Mbit/s 5GHz radios and a single 400Mbit/s 2.4GHz antenna. These networks are also used to build the mesh, with the Lyra choosing the best connection.

As with other mesh systems we’ve tested, the Lyra presents just a single network, using band steering to direct devices to the best-fit network, based on capability, performance and range.

Performance was generally good: at close range, we saw throughputs of 216.24Mbit/s. Moving to the first floor, we saw throughputs of 344.14Mbit/s, most likely because the floor is easier for the wireless signal to penetrate than the thick wall in our first test. On the top floor, performance came in at 149.32Mbit/s. That puts the Lyra at a similar speed to the BT Whole Home Wi-Fi, but a little behind the TP-Link Deco M5.

Testing outside, where we traditionally struggle to get a signal, we found that we could get throughputs of 171Mbit/s outside the kitchen window and 47.1Mbit/s at the bottom of the garden. That’s a little behind the BT system, but better than the Deco M5, which wasn’t quite so good at extreme range.

The biggest issue with the Lyra is the price. This is one of the most expensive mesh systems available, which makes it hard to justify, despite the range of features and decent performance. The BT Whole Home Wi-Fi doesn’t have the same scheduling or parental controls, but long-range performance was better.

Alternatively, there’s the TP-Link Deco. It lacks the long-distance performance, but has a similar range of features. At these kinds of price differences, the Lyra is just too expensive.