TP-Link is the latest networking-hardware manufacturer to jump on the mesh-networking bandwagon, following the lead of the Netgear Orbi, Google Wi-Fi and BT Whole Home Wi-Fi. Mesh networks use several router-like devices to distribute Wi-Fi around your home and tackle dead spots that regular standalone routers can’t reach.

TP-Link’s starter kit and comes with three identical ‘nodes’, the router like units you position around your home to boost your network. This is similar to BT’s Whole Home WiFi, which also comes with three units for a similar price.

The Google and Netgear alternatives we’ve reviewed are more expensive and only provide two units in their starter packs, although Netgear now has some cheaper models with lower specifications, and it now sells Orbi devices in packs of three.

Although more units help spread the network further, devices like the Netgear Orbi create a dedicated background network to link the devices and provide the best possible connection. TP-Link doesn’t have this but the nodes are cheaper, so you can afford more of them.

Google Wifi does even better, though.

Unsurprisingly, the Deco performed best in the mesh configuration it’s designed for, delivering speeds that matched BT Whole Home Wi-Fi in the kitchen of our test house (35MB/s) and were 8MB/s faster than Google Wifi. With two nodes – a configuration that usually delivers the best throughput in this location – it lagged behind the BT system by 1MB/s.

When we added the third node and tested again, to see how much throughput would fall when adding extra nodes to spread the network, the TP-Link edged ahead by 4MB/s. However, the differences are almost too small to notice.

What makes the Deco M5 unique is its interesting software tools. For example, it comes with Trend Micro’s internet security built into the device, with three years of service included. This means it will protect all the devices that appear on the network, so you don’t have to worry about whether individual devices are fully protected.

It also has some fantastic parental controls, which let you take charge of which devices can access the internet and when (which is great for enforcing a bedtime Wi-Fi curfew on younger gadget addicts).

“What makes the Deco M5 unique is its interesting software tools” 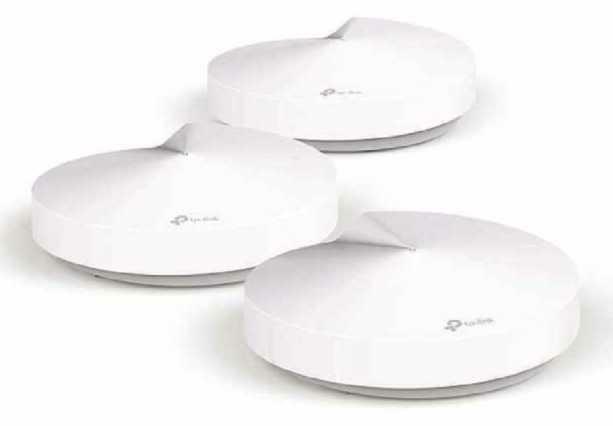 The TP-Link Deco M5 is a worthy competitor to the other mesh-networking routers we’ve reviewed. It’s well priced for three nodes and includes useful network-based antivirus and excellent parental controls.

The BT Whole Home Wi-Fi system is faster overall but if you like the sound of the extra security and control that the Deco offers, then it’s well worth the money.

The TP-Link Deco M5 is a worthy competitor to the other mesh-networking routers we’ve reviewed. It’s well priced for three nodes and includes useful network-based antivirus and excellent parental controls.